"A Chronicle of French Hipsters" by Theo Gosselin 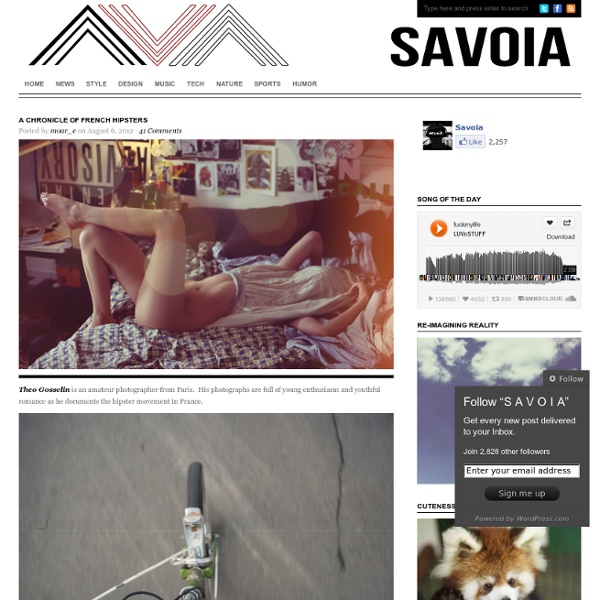 A Chronicle of French Hipsters Posted by Morrison Conway on August 6, 2012 · 74 Comments Theo Gosselin is an amateur photographer from Paris. His photographs are full of young enthusiasm and youthful romance as he documents the hipster movement in France. Like this: Like Loading...

"Toy Stories" by Gabriele Galimberti Chiwa – Mchinji, Malawi Shot over a period of 18 months, Italian photographer Gabriele Galimberti‘s project Toy Stories compiles photos of children from around the world with their prized possesions—their toys. Galimberti explores the universality of being a kid amidst the diversity of the countless corners of the world, saying, “at their age, they are pretty all much the same; they just want to play.”

Early 1900s in Colour - All around the world All around the world - Franny Wentzel - Thursday, May 6th, 2010 : goo [previous] :: [next] In the early part of the 20th century French-Jewish capitalist Albert Kahn set about to collect a photographic record of the world, the images were held in an 'Archive of the Planet'. Animals' Eyes Up Close Husky Suren Manvelyan, is a bit of a jack of all trades. He has a PhD in Theoretical Physics specializing in Quantum Chaos but has recently turned his attention to photographing the amazing detailed landscapes of eyes.

Holi 2014: The Festival of Colors This week Hindus around the world celebrate Holi, the Festival of Colors. Holi is a popular springtime celebration observed on the last full moon of the lunar month. Participants traditionally throw bright, vibrant powders at friends and strangers alike as they celebrate the arrival of spring, commemorate Krishna's pranks, and allow each other a momentary freedom -- a chance to drop their inhibitions and simply play and dance. Gathered here are images of this year's Holi festival from across India.

Thomas Barbèy’s astounding surrealism Today, everyone’s a photographer, grabbing their iPhones for a quick snap. Pictures are posted at a moment’s notice on Facebook and Instagram, so there’s never a void of visuals. Perhaps this image saturation is why surreal photo manipulation is particularly intriguing; smartphone cameras and social networking can’t hold a candle to an artist’s vivid imagination. Neon Waterfalls in Long Exposure A superb photographic series “Neon Waterfalls” from Sean Lenz and Kristoffer Abildgaard who placed in cascades and waterfalls California glow sticks. Brillant use of long exposure to capture the universe and light. More images of this project in the following section.

Jimmy Nelson Photographs Vanishing Tribes in Before They Pass Away Photographer Jimmy Nelson in Papua New Guinea I’ve been fascinated by tribal cultures for over 20 years, ever since I interviewed my grandfather about our family history and learned we had American Indian blood on both sides. In the years since, I’ve traveled to indigenous communities in Dominica, South Africa, Tahiti, the Peruvian Amazon and numerous other destinations in an effort to learn from the tribal cultures there. So you can imagine how much photographer Jimmy Nelson‘s new book, Before They Pass Away, resonated with me on a personal level.

Powerful Portraits of Brave People Revealing Their Insecurities The What I Be Project by photographer Steve Rosenfield is an intriguing study into the human condition. The participants in Steve’s projects bare their souls writing their biggest insecurities on their bodies with markers and then letting Steve photograph them. Their messages tell of fears, self-doubts, and labels for society that stop most of us from living happier lives, but it also shows us the amazing bravery of the participants to share their innermost fears with the world. Black and White Old Pictures of Pets You are here: Home / Dogs / Black and White Old Pictures of Pets Keep in themselves represent a kind of memories, especially when they are on your pets … especially when you find something like this and these are pictures in black and white from the beginning and middle of the twentieth century … Pets Foto Daily Choose

"Where Children Sleep" by James Mollison James Mollison was born in Kenya in 1973 and grew up in England. After studying Art and Design at Oxford Brookes University, and later film and photography at Newport School of Art and Design, he moved to Italy to work at Benetton’s creative lab, Fabrica. His latest book Where Children Sleep, stories of diverse children around the world, told through portraits and pictures of their bedroom.