10 Infographics That Will Teach You About Typography 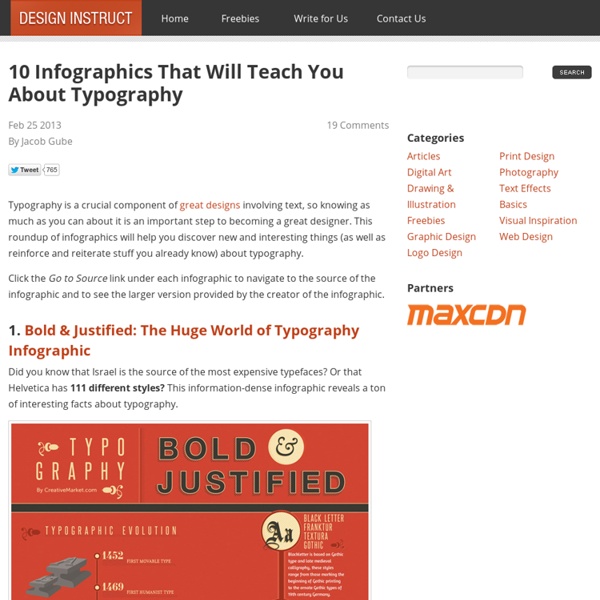 Typography is a crucial component of great designs involving text, so knowing as much as you can about it is an important step to becoming a great designer. This roundup of infographics will help you discover new and interesting things (as well as reinforce and reiterate stuff you already know) about typography. Click the Go to Source link under each infographic to navigate to the source of the infographic and to see the larger version provided by the creator of the infographic. 1. Bold & Justified: The Huge World of Typography Infographic Did you know that Israel is the source of the most expensive typefaces? Go to Source 2. This beginner’s guide to type shows you some popular font categories (like monospaced fonts and script fonts), the anotomy of a typeface, a few typography principles, and more. Go to Source 3. This infographic starts by disambiguating the terms "typefaces" and "fonts", and then concludes with the top five most-used typefaces in graphic design, journalism, and academia.

Identify a Font. Font and Typeface Identification tools. What font is that? Ever seen a typeface (font) you like but couldn’t identify it? I once knew an Art Director who was able to identify just about any typeface I showed him. However, in recent years, even he responds with, I don’t have a clue. So where to turn? Well, rather than publishing my Art Director friend’s email address here, I’ll introduce a few resources to get you started. 50 Must-Read IT Blogs 2012 When we kicked off our list of 50 Must-Read IT Blogs last year, we knew we were onto something special. We scoured the web and read many blogs before we settled on our 50 for the year, but we came away with a deep respect for the abundance of thoughtful content being generated by the collective small business and IT communities. This year, we decided to invite our readers to throw their suggestions into the ring as well. The response to our call for nominations was amazing. We received 1,159 votes from more than 400 people, so a huge thanks to everyone who contributed to this year’s list.

Download the 75 best free fonts In this freshly updated free fonts for designers post, we bring you the world's best free fonts. We've filtered out the diamonds from the thousands of less perfectly designed free fonts available online, for you to use in your designs and illustrations. Get Adobe Creative Cloud now This list represents the 55 best free fonts we've found in eight categories. You can use the drop-down menu at the top of the page, or the boxout, right, to jump to the section you want.

What is typography? First, we’ll start with the definition: typography is the visual art of creating written words. Before the digital age, typography was a rather specialized craft that was confined to the worlds of book and magazine design and a range of advertising and public works. Road signs, billboards and product packaging are some examples of where typography is used in the physical world. Typeset In The Future Right from the opening scene, we're treated to Kubrick's love of bold, clean, sans-serif typography: This title card is set in Gill Sans, one of the all-time classic sans-serif fonts. Perhaps surprisingly, the zeroes in ‘2001’ appear to be set with the Gill Sans capital letter O (shown below on the left), rather than its zero character (shown on the right): After introducing us to Albertus, the Dawn Of Man turns out to be typographically unremarkable. So, let's skip forward a little, and join Dr.

Free Google+ And Twitter Marketing Metric Tools So you’ve got what you think is a relatively successful social media campaign going – but how do you know? What statistics do you go by? Simply having a large number of “followers” or “likes” whilst nice, is not necessarily enough. For example, Lady Gaga has just under 33 million followers on Twitter so does that make her infinitely stronger than Apple who have NO followers (well perhaps that’s due to them not having a twitter page but you get my point)? 50 free Photoshop actions to create stunning effects Adobe's flagship image-editing software Photoshop has a powerful programming language built-in that allows you to record tasks as an 'action' and replay the steps to complete the task automatically. Not only can you record your own but you can also import actions, opening up a whole range of effects and time-saving options – whether you're using an older CS or have signed up to the very latest Creative Cloud version. So to add to our collections of Photoshop plugins and Photoshop resources, here are some great Photoshop actions that are free to download and install, for photographers, graphic designers, game artists and more. You can jump to the section you want from the dropdown menu above, but you should definitely check out the entire list – who knows where inspiration will strike!

50 Typography Tutorials Photoshop’s text and layer tools can be used to create some really awesome effects. We’ve put together a list of 60 of the best tutorials we could find to help you stay up to date on the latest trends and techniques. You’ll find some really cool grunge and glass styles (plus a few surprises!) and learn how some of the best designers create their unique effects. Courtesy: LemonDesign1 Instead of listing 100 plus tutorials that you’ll bookmark never to come back, we’ve decided to take you through the basics of typography, hopefully inspiring and then teaching you.