Mental_floss Blog » The War on Suffrage 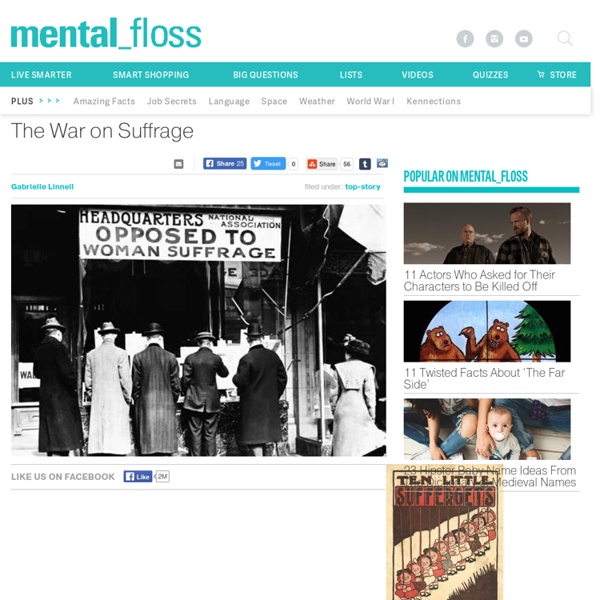 “Nine little Suffergets, Finding boys to hate, One kisses Willie Jones, And then there are Eight.” Ten Little Suffergets tells the sad tale of ten little girls who lose their pro-suffrage leanings when they spy shiny objects like toys, men, and the Sandman. The 1915 picture book ends with the final baby suffragette cracking her baby doll’s head open. “And then there were none!” ends the book on a gleeful note. The suffrage movement, both in America and England, involved angry debates about the ideals of womanhood, the power and purpose of government, and how much beer everyone should be drinking. Suffrage Isn’t Sexy The suffrage movement was part of the larger debate known as “The Woman Question” in Victorian and Edwardian times, when people were discussing what a real woman looked like. In other words, letting women get a chance at the polls would destroy the society. This attitude was reflected in the suffragette caricatures drawn in newspapers and magazines. Babes and Booze 1.

Untitled Document Masculine, feminine or human? posted on SleptOn.com, June 2, 2008. by Robert Jensen In a guest lecture about masculinity to a college class, I ask the students to generate two lists that might help clarify the concept. For the first, I tell them to imagine themselves as parents whose 12-year-old son asks, “Mommy/daddy, what does is mean to be a man?” The list I write on the board as they respond is not hard to predict: To be a man is to be strong, responsible, loving. When that list is complete, I ask the women to observe while the men answer a second question: When you are in all-male spaces, such as the locker room or a night out with the guys, what do you say to each other about what it means to be a man? The students, both men and women, laugh nervously, knowing the second list will be different from the first. When that process is over, I step back and ask the class to consider the meaning of the two lists.

State of the Nation Let's begin with a really concise summary of what men should be doing on the issue of rape prevention, which is taken from Student Health Services website for Illinois State University. Obviously something that none of these boys read. Approach gender violence as a MEN’S issue.Make sure that the sex you are having is consensual. Do not accept the myth that “no” means “yes”.Understand that submission is not consent. These are all excellent. Here's the fucking reality. 1 out of every 6 American women has been the victim of an attempted or completed rape in her lifetime (14.8% completed rape; 2.8% attempted rape). Here's the fucking reality. Every 2 minutes, someone in the U.S. is sexually assaulted.Here's the math. There are some women who tell me that they approach every male as if he could be a potential rapist. Unfortunately, the reality is still harsher than you think, as too many people think that the woman is partially (or totally) at fault in certain instances of rape. Want evidence?

s Magazine Winter 2011: The Rise of Enlightened Sexism by Susan J. Douglas Is the ‘F’ word co-opted by conservatives & consumerist media? Where are real icons & core values? On The Issues Magazine, Winter 2011, considers feminist icons, feminist values and feminist cons. The Rise of Enlightened Sexism by Susan J. Today, we once again have what Betty Friedan famously called "a problem with no name." At the same time, these young women get the message loud and clear that the absolute last thing they should embrace is feminism. After reviewing the media fare geared to girls and women since the early 1990s, I came to see a rather large gap between how the vast majority of girls and women live their lives, the choices they are forced to make, and what we see -- and don't see -- in the media. What the media have been giving us then over the past fifteen years are fantasies of power. Today many young women regard feminism as the ideological equivalent of anthrax A New Brand of Sexism With women's equality supposedly won, sexist stereotypes are considered amusing

15 Aspects That Must Be Recognized In Third-Wave Feminism 1. There must be a widespread understanding that feminism does apply to men. Therefore, men who stand up for feminist issues may, and should, be identified as feminist. It is counterproductive and hypocritical to discuss gender equality while simultaneously creating a double standard towards males who share feminist values. (I think that the phrase "feminist male" should be dropped, as well. 2. 3. 4. (This logic applies only to minor, mainstream cosmetics. 5. 6. 7. 8. 9. 10. 11. 12. 13. 14. 15.

Feminism 101: Helpful Hints for Dudes | www.xyonline.net Sometimes, and rather frequently in recent weeks, privileged men (here, generally meaning straight cis men) email me asking advice on how to interact with the women in their lives. I get questions on everything from how to be a feminist husband to how to navigate intimacy with a survivor of sexual assault, and so I'm starting a new series that offers Helpful Hints to privileged men who genuinely want advice about how to be a more feminist-friendly dude. I'm starting with the most basic—and often the most problematic—interaction between men and women: The Conversation. This, then, is a very rudimentary, but also very straightforward, primer for dudes who want to communicate more effectively with female partners, friends, relatives, and colleagues during good faith conversations about feminist issues: 1. 2. 3. 4. 5. 6. 7. 8. 9. 10. Part II [Trigger warning for objectification and dehumanization.] Exceptionalism. Breach of Consent. But not asking just might. Failure to Respect Agency. Rapists do.

The Last Triangle · Hair and Blood So I’ve been thinking about periods – and no, not the punctuation kind. That’s because I spent some time on the weekend thumbing my way through an interesting little book on menstruation. Called ‘Capitalizing on the Curse: The Business of Menstruation’, the book explores the impact that capitalist forces have had on our monthly periods. It’s by Elizabeth Arveda Kissling, a professor at Eastern Washington University. I know, I know – I can hear you now: “this is a blog about pubic hair — why the period talk?” Here’s why: because reading Kissling’s book about periods actually made me think a lot about women and their relationships to their own body hair. Kissling’s interesting premise is that though it’s a regular phenomenon for half the world’s population, periods are typically seen as icky and gross — a troublesome interruption in the month that must be dealt with (ideally) in secret (god forbid your males friends should catch a glimpse of a tampon in your purse!).