30 Unique And Must-See Photos From Our Past 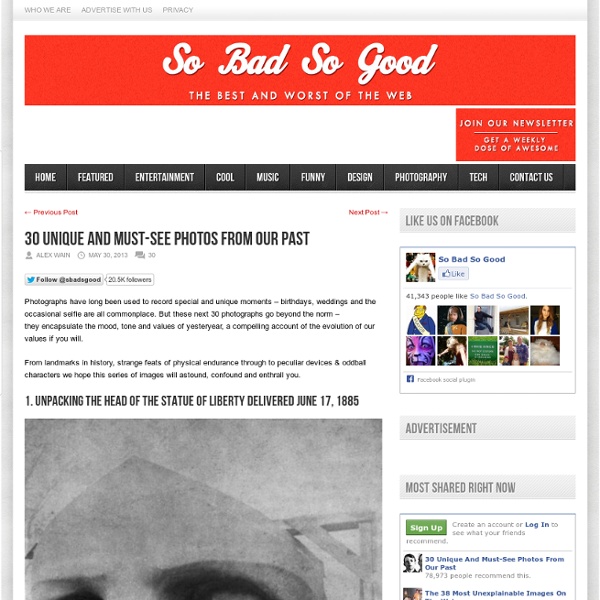 1. Unpacking the Head of the Statue of Liberty delivered June 17, 1885 Photographs have long been used to record special and unique moments - birthdays, weddings and the occasional selfie are all commonplace. But these next 30 photographs go beyond the norm - they encapsulate the mood, tone and values of yesteryear, a compelling account of the evolution of our values if you will. From landmarks in history, strange feats of physical endurance through to peculiar devices & oddball characters we hope this series of images will astound, confound and enthrall you. Via CavemanCircus

CRACKED: Old-Timey Kids Were Way Tougher Than Modern Adults #3. Sick Kids Had to Go to School Outside, in Winter Behold the magnificent installations of the St. James' Park Open-Air School in London, one of the many educational establishments from a hundred years ago that intentionally exposed kids to the elements, all year long, due to a tragic misunderstanding of how medicine works. The 27 Incredible Once In A Lifetime Shots Posted by admin on Apr 3, 2013 in Gallery | 47 comments Today we collect photos that we can see only one in lifetime and that if we had a luck to see it. These are the photos which we must save and enjoy in them all the time, because they are moment of an amazing history. List of the 30 incredible once in a lifetime shots is something that we will love and enjoy every day.

The Best of LIFE: 37 Years in Pictures Over several decades spanning the heart of the 20th century, one American magazine ― calling itself, plainly and boldly, LIFE ― published an astonishing number of the most memorable photographs ever made. Driven by the certainty that the art of photojournalism could tell stories and move people in ways that traditional reporting simply could not, LIFE pursued a grand vision, articulated by the magazine’s co-founder, Henry Luce, that not only acknowledged the primacy of the picture, but enshrined it. “To see life,” Luce wrote in a now-famous 1936 mission statement, delineating both his new venture’s workmanlike method and its lofty aims. “To see the world; to eyewitness great events … to see strange things … to see and be amazed.” The roster of talent, meanwhile, associated with Luce’s audacious publishing gamble is, in a word, staggering: W.

NOVA Can Wind Turbines Make You Sick? Residents living in the shadows of wind turbines say the sound is making them sick. But so far the science isn't there. From NOVA Next | Jun 27, 2018 CRACKED: Old-Timey Animal Photos You Won't Believe In the old days, concepts like safety, animal rights and sanity weren't as well-defined as they are now. And while there's no question that we treat animals better today than we did a few decades ago, sometimes what's good for the animals is bad for the field of insanely badass photography. So, we'll just have to fill that void with old-timey photos like these. #9. Rocky VII: Rocky Fights a Bear

Most Beautiful Villages Around The World photo Popeye Village, is a group of rustic and ramshackle wooden buildings located at Anchor Bay in the north-west corner of the Mediterranean island of Malta. Photo by: Mosin Village on the bank of the Niger river, Mali. Photo by: Yann Arthus-Bertrand Hidden mountain village in Southern China.

America in Color from 1939-1943 - Posted Jul 26, 2010 Share This Gallery inShare324 These images, by photographers of the Farm Security Administration/Office of War Information, are some of the only color photographs taken of the effects of the Depression on America’s rural and small town populations. The photographs and captions are the property of the Library of Congress and were included in a 2006 exhibit Bound for Glory: America in Color. Faro and Doris Caudill, homesteaders. Pie Town, New Mexico, October 1940. CRACKED: 15 Mind-Blowing Old-Timey Photos As we've reminded you before, people in the past just didn't give a shit. They were too busy being crazy and taking pictures of it to be bothered with how those pictures would make them look in 80 or 90 years. It's like they're daring us to make sense of them, and once again, we've risen boldly to the challenge. #15. "That's Two People Sharing a Costume, Right?" thatsjustplainweird.tumblr.com