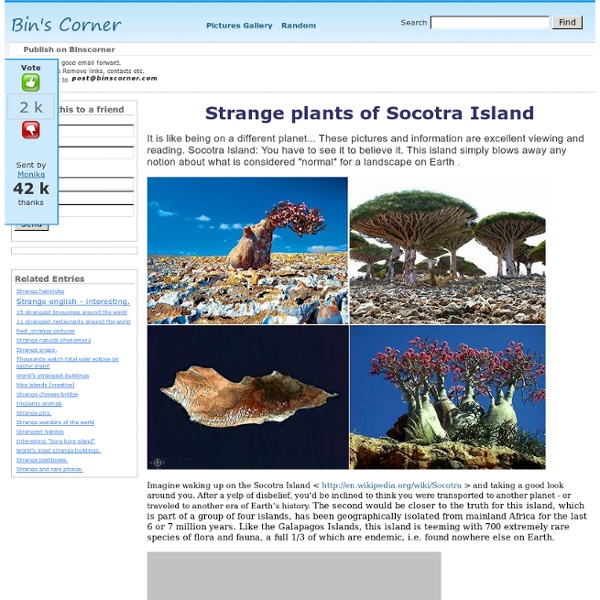 Imagine waking up on the Socotra Island < > and taking a good look around you. After a yelp of disbelief, you'd be inclined to think you were transported to another planet - or traveled to another era of Earth's history. The second would be closer to the truth for this island, which is part of a group of four islands, has been geographically isolated from mainland Africa for the last 6 or 7 million years. Like the Galapagos Islands, this island is teeming with 700 extremely rare species of flora and fauna, a full 1/3 of which are endemic, i.e. found nowhere else on Earth. The climate is harsh, hot, and dry, and yet - the most amazing plant life thrives there. The name Socotra is derived from a Sanskrit name, meaning "The Island of Bliss"... Was the famous Chtulhu myths creator aware of these forbidding mountains with their hauntingly weird flora (think of plant mutations from his "The Colour Out of Space")? Related:  interesting shit • design-3d-images

Behind a Little House Project: Dramatic Changes in Landscape Behind a Tiny House For his Behind a Little House Project Italian photographer Manuel Cosentino found an unsuspecting muse: a tiny nondescript house on an unexceptional hill. He returned to photograph the small building from the exact same location for nearly two years in order to capture the dramatic changes in weather and light that utterly changed the scenery just beyond the horizon. As part of a traveling exhibition the photos are mounted on a wall behind a book containing copies of a photo of the house against a white sky. The first photograph starts the series with a Big-Bang-like explosion and sets everything into motion, the last is a new beginning – it represents that piece of “carte blanche” that we are all given with our lives. The entire project is currently on view at Klompching Gallery in New York as part of their Annual Summer Show through August 10th.

SpaceWeather.com -- News and information about meteor showers, solar flares, auroras, and near-Earth asteroids Stoner Games/Game, Online Weed Games, Pot Games, Marijuana Games Former Attack Attack! Bassist John Holgado is the Stupidest Human Being Ever When I saw both the Lambgoat headline “Attack Attack! singer quitting band” AND the Lambgoat headline “Attack Attack! bassist leaves band” both in my RSS feed, I thought my mind was playing tricks on me, or maybe Lambgoat’s first story was an error and the second story was a correction. But no: both hilariously named vocalist Caleb Shomo and less-hilariously-named bassist John Holgado have now left the group. That’s a shame, obviously, and we can only hope that the group’s fans refuse to accept this new vocalist, or, better still, hear Led Zeppelin for the first time and finally realize they’ve been supporting fucking bullshit for the past four years. In the meantime, at least we have a hilariously stupid statement from Holgado to amuse us. “To clear things up in a very cliche manner, Andrew Whiting, Andrew Wetzel, and Caleb Shomo have been and will always be some of my best friends. Um… what? Um… seriously… what??? It was gracious of you to meet them? NNNNNOOOOO, never. No fucking shit?

Wallpapers | Free desktop wallpapers | Free stock photos Huge Stash of Marijuana Found in Ancient Tomb The world’s oldest stash of marijuana has been found in far western China, according to an article in the Journal of Experimental Botany. An ancient Caucasian people, probably the Indo-European-speaking Yuezhi whose fair-haired mummies keep turning up in Xinjiang province, seem to have buried one of their shamans with a whopping 789 grams of high-potency pot 2,700 years ago. That’s about 28 ounces of killer green bud, worth perhaps $8,000 at today’s street prices, and enough to keep Harold and Kumar happy for a couple of days. “It was common practice in burials to provide materials needed for the afterlife,” lead author Ethan B. Russo, a practicing neurologist and prominent medicinal-marijuana advocate based in Missoula, Mont., tells the Canadian Press. But the researchers couldn’t tell if the weed was meant to be smoked or eaten. (Top image: Testing the 2,700 year old marijuana for THC content. Source: Fox News 12.03.08 From the Journal of Experimental BotanyAbstract

Android Arts 25 must-see examples of kinetic typography | Typography Kinetic typography can come in all shapes and forms. Whether it's a homage to a famous movie speech or song or an exploration of the typography itself, these creations are a feast for the eyes. Here, we've picked our favourite kinetic typography animations including music videos, movie tributes and more... 01. From Paper to Screen This masterpiece was, unbelievably, a graudation project created by graphic designer Thibault de Fournas. 02. Ad agency YCN Studio recently collaborated with LA-based production company Buck on this powerful animation, which encourages children to talk about and report sexual abuse. The video promotes the services of UK-based, confidential, free, 24-hour counselling service for children, Childline. 03. American TV show Breaking Bad has won multiple awards since it first aired back in 2008. Graphic designer, illustrator and animator Paul Cooper decided to pay homage to the infamous scene using kinetic typography. 04. 05. 06. 07. 08. 09. 10.

Monsters Monster taming game Index Regarding Pokémon I've always wanted to do a Pokémon game. I was already "too old" for Pokémon when it came out. Now, I feel bad about wasting time. Anyways, the strengths of the game are self evident, so onto the flaws of the game. Pikachu, Rattata, Chikorita and Oshawott are pretty cute, but their evolutions are not. You don't have any meaningful social connection with your Pokémon (unlike the characters in the animé). Trainer Fort Craft! I was thinking something along the lines of, you'd have a group of trainers catching wild monsters and building a base (with the help of the monsters), defending against Team Rocket and their base, and/or natural/random threats. The monsters take on the role as the evil aliens. On Pokémon Monster Design Designing Pokémon is really difficult. So, I think a good Pokémon design (aside from being well drawn) should be: Made from efficient shapes, no filler stuff. Exploration And new 2013. Style test Tangents On Later Gens Diversion Fossil

An Amaz-ing Resume - Philippe Dubost 20 best: Goth records ever made Words: Kiran Sande It’s June, 1999, or thereabouts. I’m sixteen years of age. I’m in a nightclub for the first, perhaps second time in my life. The nightclub is called Spiders, and it’s located on the edge of an industrial estate in Hull. Being 16, I can barely believe my luck when I’m granted entry. I look at the wall. Activated as if by remote control, the sextet of black-clad folk who I’ve mistaken for a wall troop off in the direction of the music, still not uttering a single word to each other. These characters, you will have gathered, are the Goths. That was 1999, and this is 2010. I’m not a goth, nor was I meant to be. So what, you may ask, do I even mean by “goth”? Forget the idiots in Camden still caning Sisters CDs and dressing for Columbine. Bauhaus embody the escapist, self-dramatizing spirit of goth. Following the bittersweet jangle-pop of their debut album, The Cure began to show their true, dark colours on 1980′s Seventeen Seconds.

Information Design Watch | December 14, 2011, 9:57 am Game Theory, Starring the Bowerbird By Henry Woodbury For some reason I was reading about game theory over on Wikipedia, and followed a link to this: This is one of the “Mathematical Cartoons” created by Larry Gonick for Discover magazine. Comments (1) | Filed under: Comics, Creativity, Illustration September 27, 2011, 3:29 pm Theremins, Slot Machines, and Wheels of Destiny: Flexing the UI Design Muscle By Lisa Agustin When building a web site or application, the wireframes usually represent the first time functionality and content requirements take visual form. And yet the typical approaches to rendering a user interface–dropdown lists, calendars for date picking, rollovers and accordions for menus–seem to be lacking in the creativity department. The idea that constraints help creativity is not a new idea, but Heydlauf wants to up the ante by introducing artificial constraints as a way to “design solutions to problems we might not even have.” Game Theory