The joy of cloudspotting: 10 incredible visions in clouds 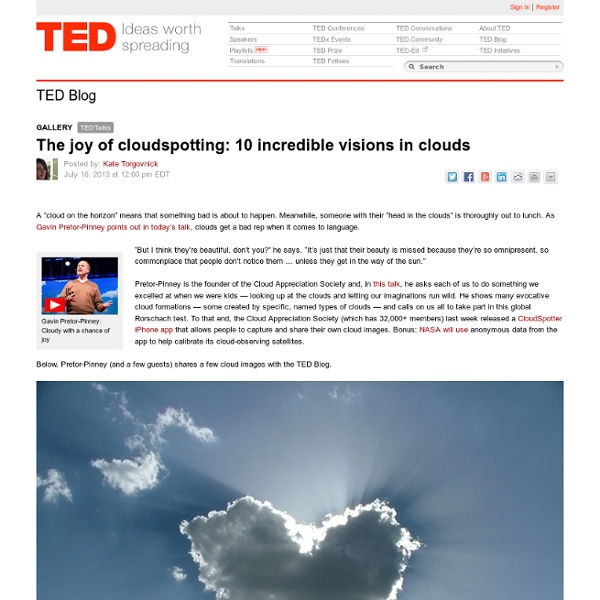 A “cloud on the horizon” means that something bad is about to happen. Meanwhile, someone with their “head in the clouds” is thoroughly out to lunch. As Gavin Pretor-Pinney points out in today’s talk, clouds get a bad rep when it comes to language. Gavin Pretor-Pinney: Cloudy with a chance of joy“But I think they’re beautiful, don’t you?” he says. “It’s just that their beauty is missed because they’re so omnipresent, so commonplace that people don’t notice them … unless they get in the way of the sun.” Pretor-Pinney is the founder of the Cloud Appreciation Society and, in this talk, he asks each of us to do something we excelled at when we were kids — looking up at the clouds and letting our imaginations run wild. Below, Pretor-Pinney (and a few guests) shares a few cloud images with the TED Blog. A heart-shaped cloud, spotted by Angelo Storari of Ancona, Italy. A fish in the sky, spotted by Gavin Tobin of the Blasket Islands in Ireland. Spotted by Andrew Kirk of Deep Springs, California.

Modo – Modular Desktop Organizer by B&A Studio De-clutter Desk With Modular Modo If you feel a twinge of embarrassment when you look at the clutter on your desk, then you are in serious need of help. Pens, wires, gadgets, basically the contents of a junk drawer strewn across is what best describes most office desks around the world. Modo or Modular Desktop Organizer is the answer we all have been waiting for. Zen and balance in life is achieved if all the elements are in sync with each other. Details about Modo and B&A Studio can be found here. Key Features: The Modo pins can be spaced in any configuration to store items like the tablet, computers, note books / pads, phones, hard drives, letters …The Modo band can be used for pens pencils and other itemsThe Modo balls can be used as pin or tack cushionsThe Modo caps provide extra protection for your device screens and double up as stylus tipsThe Modo slots help manage your cables on top or below ModoThe Modo USB hubs allow you to manage up to 3 USB drives

10 Most Unbelievable Places in the World There are ten most unbelievable places in the world that you definitely must visit before you die. 1. Tunnel of Love, Ukraine Image credits: Oleg Gordienko This powerful train tunnel of trees called the Tunnel of Love is located in Kleven, Ukraine. 2. Image credits: Allard Schager The sensational landscape provokes a visual effect hard to repeat in a life time. 3. Image credits: dadi360 Salar de Uyuni (or Salar de Tunupa) is the world’s largest salt flat at 10,582 square kilometers (4,086 sq mi). 4. Image credits: nipomen2 | sename777 Hitachi Seaside Park, located in Hitachinaka, Ibaraki prefecture, Japan, next to the Ajigaura Beach, is a flower park and a popular tourist destination. 5. Image credits: Kent Mearig The Mendenhall Glacier is a tongue of ice stretching 12 miles from the Juneau Icefield to Mendenhall Lake. 6. Image credits: MJiA The Red Beach is located in the Liaohe River Delta, about 30 kilometer southwest of Panjin City in China. 7. Image credits: Yuya Horikawa | Tomoaki Kabe 8.

untitled 21 Most Beautiful Nature Photos On Stumbleupon These are the 21 most beautiful nature photos on Stumbleupon. Stumbleupon is big society where you can spend all your day and all you life with smile on your face. On that site you can find lots of things, like photos, animals, home stuff and many more, nature photos like these one below. These nature photos are really beautiful and very amazing and that is the proof just how much our Earth is beautiful place. Spotted At The Apple Store * Plus ICANN fee of C$0.20/yr. *** Domains with bulk pricing do not qualify for additional promotional discounts. † Free InstantPage®/Hosting with Website Builder are not included with .XXX domain registrations. †† .CA domain names will be registered through GoDaddy Domains Canada, Inc., a CIRA certified registrar. + Special savings apply only to first year of registration. ++ .CO.UK, .ORG.UK, .ME.UK, .EU, .ES, .SE, .COM.AU, .NET.AU and .ORG.AU domains not included. ^^ Discount based on current retail value. ^^^ Buy a new .COM, get one new .INFO for FREE for 1st year only. ± com.au, net.au, and org.au domain names can only be registered for 2 years.

The 6 Most Creative Abuses of Loopholes The best way to get away with cheating isn't to avoid getting caught... it's to technically not do anything wrong, and still get all the rewards. That's where you find the line between lawbreakers and those who simply think outside the box... and that line is very thin indeed. Bar Declares Everyone to be Actors to Circumvent Smoking Ban Back in 2007, Minnesota followed a national trend by passing an anti-smoking law that banned smoking in pretty much every public building, including bars. Unfortunately, that was bad news for the bars, because if you're going to get good and drunk to fight off the depression manual labor and seasonal affective disorder brings, you want to get your smoke on, too. "...or, we could get stoned and play Xbox." The good owners of the Barnacles Bar were determined to find a loophole that would let their nicotine-addicted clientele feed their deadly vice in peace. "Now can I fucking smoke?" Man Flies Free Thanks to Pudding It really does pay to read the fine print.

untitled Aquascaping Is Underwater Art Unlike Anything You’ve Ever Seen | Fill The Well Like Fill The Well on Facebook! You may have never heard of aquascaping, but to many people it’s a very serious art. The International Aquatic Plants Layout Contest holds an annual competition that ranks the best of aquarium design, and the results are phenomenal. Here are some of the entries that showcase the incredible underwater landscapes that contests have designed using their expertise in art and biology. “Forest Scent” by Pavel Bautin “Pale Wind” by Takayuki Fukada “Whisper of the pines” by Serkan Çetinkol “Verve!” “Way to heaven” by Dmitriy Parshin “Wild West” by Stjepan Erdeljić By Georgi Chaushev By Francisco Wu By Long Tran Hoang “Pilgrimage” by Shintaro Matsui If you liked this, please share:

Dad Captures One Second Per Day of His Son's First Year of Life On July 9th, 2012, photographer Sam Cornwell of Hayling Island, England welcomed his son Indigo into the world and became a father for the first time. Starting on that life-changing day, Cornwell and his wife Beverley have been documenting the growth of their boy by capturing at least one second of video every single day. Yesterday, one year and thousands of videos after the project began, the photographer took the clips and combined them into the beautiful “moving time-lapse” seen above. Sam, Indigo, and Beverley Indigo was born a month before his due date, and Sam and Beverley have had new experiences every day as first time parents. At the end of each day and during special moments, the couple would pull out their iPhones and capture photos and short video clips. Sam tells us that he was originally inspired by Cesar Kuriyama’s “one second per day” idea for documenting life. Why a video time-lapse instead of still photos?

10 Mind-Blowing Theories That Will Change Your Perception of the World Reality is not as obvious and simple as we like to think. Some of the things that we accept as true at face value are notoriously wrong. Scientists and philosophers have made every effort to change our common perceptions of it. The 10 examples below will show you what I mean. 1. Great glaciation. Great glaciation is the theory of the final state that our universe is heading toward. 2. Solipsism is a philosophical theory, which asserts that nothing exists but the individual’s consciousness. Don’t you believe me? As a result, which parts of existence can we not doubt? 3. George Berkeley, the father of Idealism, argued that everything exists as an idea in someone’s mind. The idea being that if the stone really only exists in his imagination, he could not have kicked it with his eyes closed. 4. Everybody has heard of Plato. In addition to this stunning statement, Plato, being a monist, said that everything is made of a single substance. 5. 6. Enternalism is the exact opposite of presentism.