Most Beautiful Villages Around The World photo 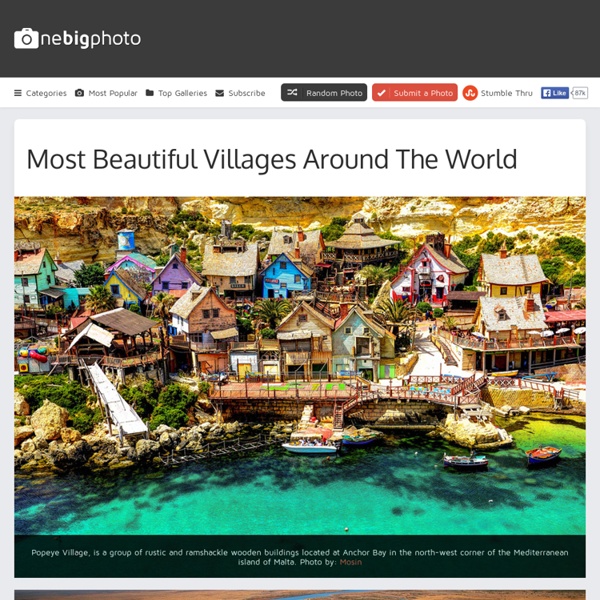 Popeye Village, is a group of rustic and ramshackle wooden buildings located at Anchor Bay in the north-west corner of the Mediterranean island of Malta. Photo by: Mosin Village on the bank of the Niger river, Mali. Photo by: Yann Arthus-Bertrand Hidden mountain village in Southern China. Photo by: Christian Ortiz Mist over countryside in Southwest England. Hobbiton village – “Lord of the Rings” movie location in New Zealand. Riomaggiore is a village and comune in the province of La Spezia, situated in a small valley in the Liguria region of Italy. Mountain Village, Iran. Beautiful African sea side village. Hallstatt, Upper Austria, is a village in the Salzkammergut, a region in Austria with 946 inhabitants. Gásadalur village, Faroe Islands. Village located in Himalayas, Tibet. Fort Bourtange is a star fort located in the village of Bourtange, Groningen, Netherlands.

The 23 Photos That Will Make Your Stomach Drop Posted by admin on May 1, 2013 in Nature | 39 comments If you love to do something that is uncommon, and what people do just few times in whole year, than you must try to do something like this on photos below. Maybe you will feel strange while you looking at this photos, you will see, who knows. 1.

From Flashcards to Freakouts: the Art of Learning Another Language and Not Going Crazy » My Spanish Adventure Here’s the hardest part, hands down, of learning any language, ever. Harder than memorizing tenses. Harder than subjunctive conjugations. Harder even still than negative mandates in the pluperfect oh my gosh my head hurts. Are you ready? 10 Most Famous Trees in the World Famous trees come and go. L’Arbre du Ténéré was once considered the most isolated tree on Earth, a landmark on caravan routes in the Sahara, until it was knocked down by a drunk Libyan truck driver in 1973. This year in August, the famous Anne Frank tree in Amsterdam was blown down by high winds during a storm.

Gallery: The power of water “Maybe ignorance is bliss, but we can’t be ignorant any more. The consequences are too dire for human health and the health of the planet.” Photographer Ed Burtynsky is contemplating climate change, an unheralded but ever-present character in his latest book and film, Watermark, a clip of which he showed at TED2014 in Vancouver. And the mild-mannered artist is fired up. The 15 Craziest Things In Nature You Won't Believe Actually Exist Mother Nature is beautiful and amazing because we can see many amazing stuff like these 15 things that you won’t believe they actually exist. All these places are real. It is hard to believe in that, but that is true. 1. Volcanic lightning aka “dirty thunderstorms.”

10 Most Beautiful Villages in Europe From the Alps to the Mediterranean, these frozen-in-time European villages will make you appreciate the beauty of taking it slow. Reaching some of these European beauties requires extra effort, yet the rewards are dazzling. Your eyes will thank you. Hallstatt, Austria Starkenberger Brewery - An Austrian brewery castle where you can literally swim in beer Presenting the one place in the world where it's not girly to take a bubble bath: the centuries-old Austrian brewery Starkenberger, who've built the world's first-ever beer swimming pools in the recesses of their brew-castle, and, for a paltry fee, you can take a dip. Here's the skinny: Starkenberger

Famous Quotes are Paired with Clever Illustrations Kuala Lumpur, Malaysia-based illustrator Tang Yau Hoong has just released a brand new series where he pairs one of his older illustrations with a famous quote. A few years ago, we discovered Hoong and we quickly became fans after we saw his ability to cleverly incorporate negative space into many of his works. As he told us then, "I enjoy making illusion art because it has the ability to mislead us.

Breathtaking Travel Photography by Weerapong Chaipuck Thailand-based photographer Weerapong Chaipuck captured stunning landscape and people photos from around the world during his travels after early retirement from the profession in the medical field… Weerapong Chaipuck Liverpool all-star game best pictures - our pick of some fantastic images There are some days as a photographer when you just need to point the camera and click in the knowledge you're going to take a great photo and so it was at Anfield yesterday for the Liverpool FC All-Stars game. Two teams captained by Steven Gerrard and Jamie Carragher took to the field, giving an entranced crowd the chance to see footballing legends take to the field again. Among the greats on show were the beloved Xabi Alonso, the forgiven Fernando Torres, the always-sung-about Luis Garcia and the please-come-back-for-good Luis Suarez from recent LFC history, as well as superstars including Thierry Henry and Didier Drogba. We've rounded up the best photos from a historic day for you to enjoy again, and you can see links to the rest of our coverage below the gallery.

Top 25 Most Amazing Abandoned Corners of Earth It doesn’t matter how beautiful are the new tourist destinations, those that are curious will always go to visit some historical places, and when those are abandoned and not touched by the human hand for a long time, they become a mysterious riddles. Abandoned Isle, Netherlands Abandoned City Near Chernobyl Nuclear Power Plant, Ukraine Boat from 2nd World War, Homebush, Australia Railway Station in Poland