The 27 Incredible Once In A Lifetime Shots 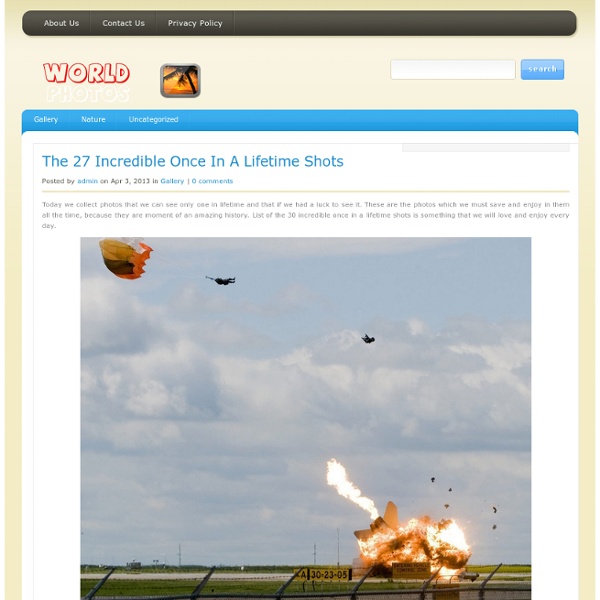 Posted by admin on Apr 3, 2013 in Gallery | 47 comments Today we collect photos that we can see only one in lifetime and that if we had a luck to see it. These are the photos which we must save and enjoy in them all the time, because they are moment of an amazing history. List of the 30 incredible once in a lifetime shots is something that we will love and enjoy every day.

Photos of Children From Around the World With Their Most Prized Possessions Chiwa – Mchinji, Malawi Shot over a period of 18 months, Italian photographer Gabriele Galimberti‘s project Toy Stories compiles photos of children from around the world with their prized possesions—their toys. Galimberti explores the universality of being a kid amidst the diversity of the countless corners of the world, saying, “at their age, they are pretty all much the same; they just want to play.” But it’s how they play that seemed to differ from country to country. Galimberti found that children in richer countries were more possessive with their toys and that it took time before they allowed him to play with them (which is what he would do pre-shoot before arranging the toys), whereas in poorer countries he found it much easier to quickly interact, even if there were just two or three toys between them. There were similarites too, especially in the functional and protective powers the toys represented for their proud owners.

Jonas Liveröd Here you can buy limited edition fine art prints by Swedish artist Jonas Liveröd. All artworks are giclee printed on 308gsm Hahnemühle fine art paper. Each artwork is a limited edition, either signed on the print or comes with a signed and numbered Cetificate of Authenticity. Jonas Liverod is a Malmoe based artist born in 1974 in Kristinehamn, Sweden. He has done several acclaimed art exhibitions throughout the years and his works have been published in numerous books and magazines around the world.

20 Very Interesting Photos From The '30s I love old photos because this is the only way I can really see our history. I like to check out the details such as clothing, decorations or food products because is not only interesting to see their habits but also how these evolved during decades or centuries. The images below were taken in the ’30s in various circumstances from an ice-skating scene and all the way to a legendary image with Stalin fooling around. I hope that you like them as much as I do. Young skater with safety cushion

Anka Zhuravleva Moscow raised and StPete based awesome artist and photographer Anka Zhuravleva invites you to be mesmerized by her latest photo-artwork series “Distorted Gravity”. Anka-Zhuravleva.com Dancers among us “The inspiration for this book came to me one afternoon as I watched my son, Hudson, playing with his toy bus. I was trying to keep pace with his three-year-old mind as he got deeper and deeper into a fantasy involving nothing more than a yellow plastic box and armless figurines. At least that’s what I saw. Avner Dorman Avner Dorman ( Hebrew : אבנר דורמן) (born April 14, 1975 in Tel Aviv , Israel ) is an Israeli-born composer of contemporary classical music. Biography [ edit ] Avner Dorman holds a Doctorate in Music Composition from the Juilliard School [ 1 ] where he studied as a C.V.

21 Most Beautiful Nature Photos On Stumbleupon These are the 21 most beautiful nature photos on Stumbleupon. Stumbleupon is big society where you can spend all your day and all you life with smile on your face. On that site you can find lots of things, like photos, animals, home stuff and many more, nature photos like these one below. These nature photos are really beautiful and very amazing and that is the proof just how much our Earth is beautiful place. You Don’t Know The Meaning Of The Word ‘EPIC’ Until You Seen These 20 Pictures October 4, 2011 | 31 Comments » | Topics: Awesome, Pics Hot Stories From Around The Web Other Awesome Stories

The 15 Craziest Things In Nature You Won't Believe Actually Exist Mother Nature is beautiful and amazing because we can see many amazing stuff like these 15 things that you won’t believe they actually exist. All these places are real. It is hard to believe in that, but that is true.