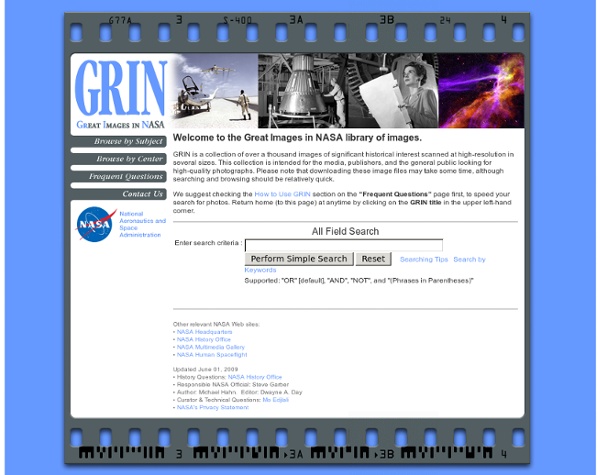 GRIN is a collection of over a thousand images of significant historical interest scanned at high-resolution in several sizes. This collection is intended for the media, publishers, and the general public looking for high-quality photographs. Please note that downloading these image files may take some time, although searching and browsing should be relatively quick. We suggest checking the How to Use GRIN section on the “Frequent Questions” page first, to speed your search for photos. Return home (to this page) at anytime by clicking on the GRIN title in the upper left-hand corner.

Math, Physics, and Engineering Applets Oscillations and Waves Acoustics Signal Processing Electricity and Magnetism: Statics Electrodynamics Out of this whirl: The Whirlpool Galaxy (M51) and companion galaxy The graceful, winding arms of the majestic spiral galaxy M51 (NGC 5194) appear like a grand spiral staircase sweeping through space. They are actually long lanes of stars and gas laced with dust. This sharpest-ever image, taken in January 2005 with the Advanced Camera for Surveys aboard the NASA/ESA Hubble Space Telescope, illustrates a spiral galaxy's grand design, from its curving spiral arms, where young stars reside, to its yellowish central core, a home of older stars. The galaxy is nicknamed the Whirlpool because of its swirling structure. The Whirlpool's most striking feature is its two curving arms, a hallmark of so-called grand-design spiral galaxies. Many spiral galaxies possess numerous, loosely shaped arms that make their spiral structure less pronounced.

My Fundraising Page Let me introduce you to my Dad, Gary Eisenberg- I can't count the amount of times my Dad has looked at me wide eyed and said "I can't wait for tomorrow!" and confused I always ask him why as he smirks back, "because I just get better looking every day!" - yes, my father finds himself hilarious. Besides being entertaining my Dad has always been a motivator. Copyright-Free Photo Archive: Public Domain Photos and Images The photo archive at Gimp-Savvy.com has more than 27,000 free photos and images saved on our own dedicated server, consisting of over 2.5 Gbytes of data. The goal is to make this archive a resource for collage and photo-montage using digital image editing techniques such as those described in Chapter 7 of Grokking the GIMP. To improve the archive's usefulness, full indexing of the images is planned.

Learn Physics Today! As of July 1, 2013 ThinkQuest has been discontinued. We would like to thank everyone for being a part of the ThinkQuest global community: Students - For your limitless creativity and innovation, which inspires us all. Teachers - For your passion in guiding students on their quest. Purim Poppy Seed Cake with Lemon Glaze Note from Tori: This recipe has been retested and updated with new photos for 2014! I improved the recipe by cutting the butter in half and adding vegetable oil to make the cake more tender and moist. I also used full fat dairy and added a bit more lemon juice.

Community FQXb (bio)By WILLIAM OREM • Mar. 23, 2014 @ 21:39 GMT Everyone is talking this week about the dramatic confirmation of inflationary theory: those first-instant gravitational waves whose details may even point--being, if you will, quantum phenomena that went suddenly ultra-macroscopic--toward the correct way to unify QM and GR. I myself have been musing on rather astonishing work in another field. Will you pardon the intrusion if we talk a little bit about biology? Recently the big news there was released: an unprepossessing experiment involving a weak acid bath showed it's possible to revert mature, differentiated cells to a stem cell state, allowing for the prospect of wholesale repurposing. The surprise wasn't that reversion (or conversion from one mature type into another) can be done--genetics work in that direction took home a Nobel in 2012--but that it can be done so simply.

101 Best Restaurants in America for 2012 It becomes more difficult every year to rank America’s best restaurants. We say that having done it for nearly a half-decade. As interest in dining out increases, and more great chefs train younger good ones, fantastic food continues to spread out across the country. Exceptional culinary landscapes in big cities get even better, and new and different dining scenes are born and in turn attract and inspire even more greatness from a growing number of talented cooks. This makes trying to rank the country’s best restaurants in 2014 all the more challenging, but also all the more interesting, worthwhile, and intriguing.

Failed Star Found In The Neighborhood: Scientific American Podcast It looks like we have a new neighbor. It's actually been there all along, but astronomers have only now spotted what could be the seventh closest star system to the sun. The system is just nine light years away, a mere stone's throw in astronomical terms. It took so long to find because it's an extremely dim and cool kind of failed star called a brown dwarf.

A dog’s seeing eye dog Lily is a Great Dane that has been blind since a bizarre medical condition required that she have both eyes removed. For the last 5 years, Maddison, another Great Dane, has been her sight. The two are, of course, inseparable. (via Weird Universe, Daily Record, The Sun) Is Time An Illusion? From The Buddha To Brian Greene : 13.7: Cosmos And Culture Can time be stopped, captured or even known? Does it exist, or is it all just an illusion? Karim Sahib / AFP/Getty Images