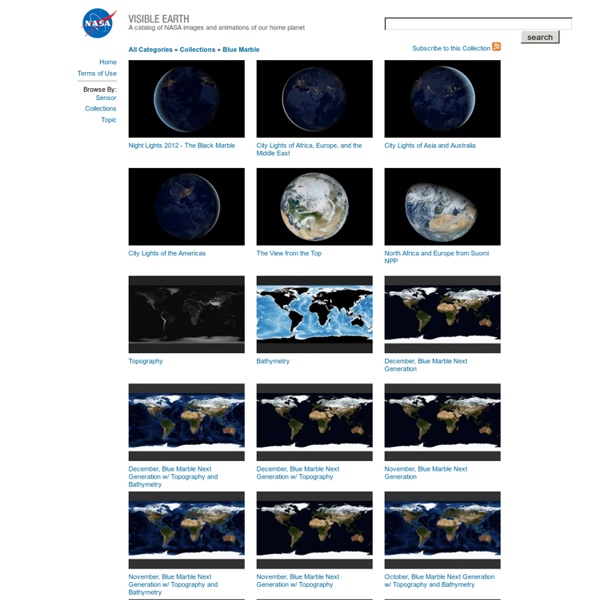 Project Eden In this post, I'll be describing in more detail how the CG Earth is constructed. The whole planet was broken down into several key components: land, water, clouds, atmosphere and an atmospheric "rim". The atmosphere has two components because it's not a true volumetric simulation, but a kind of hack ^^; Rope Physics Rope Simulation In this tutorial, you will find a simulation of a rope. This simulation is based on the simple physical simulation engine in Lesson 39. In order to benefit from this tutorial, you should know how forces are applied to masses in simulations, how position and velocity of a mass is iterated while the simulation runs, and how 3D vectoral operations are used in physics. If you hesitate on any one of those subjects, read about them from Lesson 39 and other sources, and develop several applications. In physical simulations, the purpose is to form a physical setting, which acts the same as in the natural environment.

john locke » Blog Archive » visualizing sound in processing This was the final applet in motion. Using the minim library for processing, each waveform is generated in realtime as the two sounds play over eachother creating a pretty chaotic sound, but there are some instances of overlapping patterns where the mashup works pretty well. In the third version of the code, the boolean of the two waveforms is generated, producing a new way to visualize the waveforms. View the youtube video here, but I really need to figure out a way to add sound to the video, silence doesn’t do it justice. Charlie Parker, Iggy Pop and Richard Wagner comparison + code:

OpenGL:Tutorials:Tutorial Framework:Particles In this example, We're going to extend the principles used in the Ortho example to produce a nice particle effect. Setting Up Each particle has unique position, direction vector, color and a 'life' values. These values are contained by a structure: typedef struct { float xPos,yPos,zPos; float xVec,yVec,zVec; float r,g,b,life; }SpriteInfo;

Artificial intelligence AI research is highly technical and specialized, and is deeply divided into subfields that often fail to communicate with each other.[5] Some of the division is due to social and cultural factors: subfields have grown up around particular institutions and the work of individual researchers. AI research is also divided by several technical issues. Some subfields focus on the solution of specific problems. Others focus on one of several possible approaches or on the use of a particular tool or towards the accomplishment of particular applications. The central problems (or goals) of AI research include reasoning, knowledge, planning, learning, natural language processing (communication), perception and the ability to move and manipulate objects.[6] General intelligence is still among the field's long-term goals.[7] Currently popular approaches include statistical methods, computational intelligence and traditional symbolic AI. History[edit]

Some comments on OpenGL rendering of particles When rendering particles in OpenGL there are many possible ways to represent them. The following goes through some of the possibilities with associated pseudo-code. At the very basic level it is possible to simply render the particles as points: glPointSize( 3.f ); glColor4f (1.0f,1.0f,1.0f,1.0f); glBegin(GL_POINTS); for(i=0; i<npoints; i+=nskip) { glVertex3f(x[i], y[i], z[i]); } // Done drawing points glEnd(); This produces a plot below: In the next level, it is possible to replace the points with "point sprites". Software engineering Software Engineering is the study and application of engineering to the design, development, and maintenance of software.[1][2][3] Typical formal definitions of software engineering are: "the application of a systematic, disciplined, quantifiable approach to the development, operation, and maintenance of software".[4]"an engineering discipline that is concerned with all aspects of software production"[5]"the establishment and use of sound engineering principles in order to economically obtain software that is reliable and works efficiently on real machines"[6]

Simulating Particle Effects using OpenGL Particle Effect In this article I will demonstrate one possible way to implement a particle effect in C++ using OpenGL to render the effect. This demo uses the fixed function pipeline and the host processor (CPU) to perform the simulation. In this article, I will use OpenGL and GLUT to render graphics to the application window. If you do not know how to setup an application using OpengGL and GLUT you can refer to my previous article titled [Introduction to OpenGL for Game Programmers] available [here]. Particles systems have been used extensively in games for many years.

Optics Optics is the branch of physics which involves the behaviour and properties of light, including its interactions with matter and the construction of instruments that use or detect it.[1] Optics usually describes the behaviour of visible, ultraviolet, and infrared light. Because light is an electromagnetic wave, other forms of electromagnetic radiation such as X-rays, microwaves, and radio waves exhibit similar properties.[1] Some phenomena depend on the fact that light has both wave-like and particle-like properties. Explanation of these effects requires quantum mechanics. When considering light's particle-like properties, the light is modelled as a collection of particles called "photons". Quantum optics deals with the application of quantum mechanics to optical systems.

Tutorial 4: Texture Mapping One of the most powerful tools in computer graphics is texture mapping. Texture mapping applies an image to a surface. Modeling a complex surface is often impractical because of the detail required and it would be difficult to render this fine detail accurately. MS in Instructional Technology with ITS Certification The specialization is for students planning to become Instructional Technology Specialists in Pennsylvania schools. This specialization prepares students to advise and lead at the building or district level. Students taking this specialization are given the opportunity to expand understanding of instructional technology through theoretical and project-oriented study. It addresses legal and ethical issues, leadership, technology planning, and other practical aspects of the role of the Instructional Technology Specialist. Students may have an opportunity to interact with guest lecturers who share informed academic and practical knowledge, receive supervision through field experience, and obtain guidance in the compilation, presentation and defense of a professional portfolio. Course Requirements