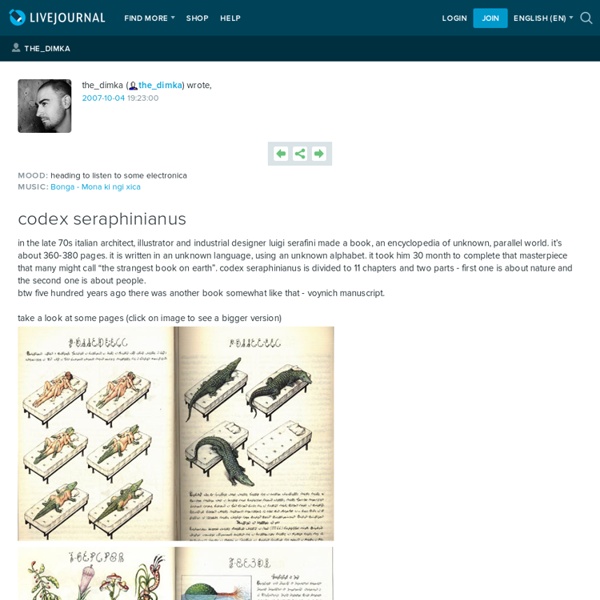 in the late 70s italian architect, illustrator and industrial designer luigi serafini made a book, an encyclopedia of unknown, parallel world. it’s about 360-380 pages. it is written in an unknown language, using an unknown alphabet. it took him 30 month to complete that masterpiece that many might call “the strangest book on earth”. codex seraphinianus is divided to 11 chapters and two parts - first one is about nature and the second one is about people.btw five hundred years ago there was another book somewhat like that - voynich manuscript. take a look at some pages (click on image to see a bigger version) amazon sells those for 500 bucks or more you can read about it in wikipedia.i can’t even tell you how much i like stuff like that phat a? update 2 i ordered the book and it arrived. it is gigantic in size, thick and large. print, paper and binding quality is superb. they also insert a booklet - decodex, but it is in italian and i have not mastered that one yet.

Fuck Yeah Bruce Timm! 30th October 2014 Photo reblogged from ComicsAlliance with 58 notes comicsalliance: Service Design Tools Design activities Co-designing Envisioning Testing & Prototyping Implementing 15. Anthony Rooley - Music Anthony Rooley We don’t have a pickled larynx from Dowland’s day – or Henry Purcell’s either; but we do have various fragments of different musical instruments from earlier times – and occasional surviving complete instruments. It is the study of these surviving artefacts that has kept alive the ‘early music movement’ for these last 40 years, and it is the fruits of these studies, applied research and skilled craftsmanship along with dedicated application of re-discovered fingerings and playing techniques that forms the basis of so much excellent live performance and recording of instrumental music from past centuries. But a recording of Handel’s dramatic cantata, Apollo and Daphne, I heard recently underlined the dilemma that has brought this present conference into being.

Thought experiment A thought experiment or Gedankenexperiment (from German) considers some hypothesis, theory,[1] or principle for the purpose of thinking through its consequences. Given the structure of the experiment, it may or may not be possible to actually perform it, and, in the case that it is possible for it to be performed, there need be no intention of any kind to actually perform the experiment in question. The common goal of a thought experiment is to explore the potential consequences of the principle in question. Famous examples of thought experiments include Schrödinger's cat, illustrating quantum indeterminacy through the manipulation of a perfectly sealed environment and a tiny bit of radioactive substance, and Maxwell's demon, which attempts to demonstrate the ability of a hypothetical finite being to violate the second law of thermodynamics. Overview[edit] Salviati.

FZD Student Term Break Work - Visual Library The two weeks break between terms at FZD are not just for rest and relaxation. It's also the time for students to build up their visual library (through drawing from real references). FZD Advanced Diploma Student - Dmitry Sorokin I'm very pleased to showcase Dmitry's work here. He came into FZD with almost zero drawing abilities. But through a lot of hard work (and guidance from our FZD Art Directors), look what he is able to achieve in only a year! It was a pleasure working with him through our Advanced Dip program at FZD.

Cloudy With a Chance of Meatballs 2 - Visual Development Work All Sculpts(except Barry) & Animation Rigging - Me Character Designer - Craig Kellman! Watermelophant & Shrimpanzee Designs - Andre Medina Paint Overs for Barb & Chester - Mike Kurinksy Animation Tests/ - Character Rigging - Me - Animation - Chad Stewart - Lighting - Todd Pilger - Barry Sculpt - John Butiu 14,664 Free PowerPoint templates - High Quality b 58,086 Free PowerPoint Templates and Backgrounds Over time we have built up a collection of 58,086 free PowerPoint templates, themes and PowerPoint Backgrounds. Art of Nico Marlet You guys. Go see How to Train Your Dragon 2 this weekend, then come to the How to Train your Dragons 2 show next week!! It’ll have a tonne of artwork by artists from Dreamworks, including the above by James Baxter, Nico Marlet, Johane Matte (who made a badass comic you can get at the gallery), Megan Nicole Dong, Le Tang, Joe Pitt, and myself.

Supermarket Sarah After graduating from art college, Sarah Bagner worked as a creative in advertising for several years before moving into styling and selling her vintage wares in London's Portobello Market. She set up www.supermarketsarah.com in 2009, where she sells and displays all her items on walls. Users simply click and buy. Sarah's "walls" spread into public spaces: bars, galleries, shopfronts and a pop-up store in Selfridges, London's premier department store. The site and blog have become a platform for young talent and have been featured in a wide range of media, including the Guardian, Evening Standard, Sunday Times Style, British Vogue, Elle decoration, French Elle, Japanese Elle and the BBC news.