20 Very Interesting Photos From The '30s 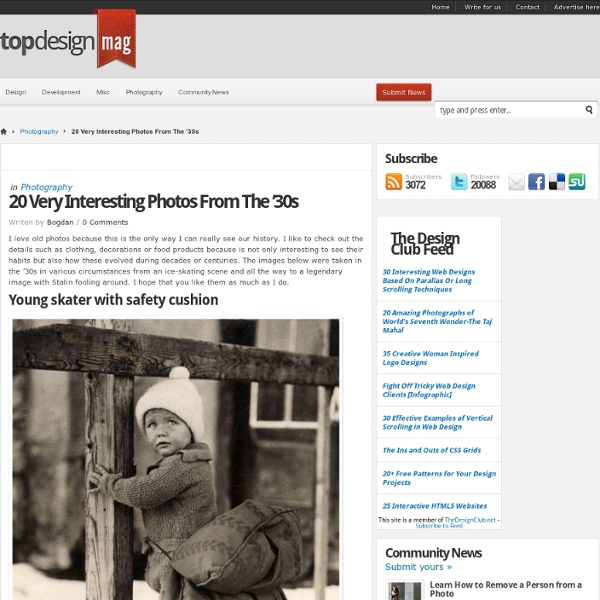 I love old photos because this is the only way I can really see our history. I like to check out the details such as clothing, decorations or food products because is not only interesting to see their habits but also how these evolved during decades or centuries. The images below were taken in the ’30s in various circumstances from an ice-skating scene and all the way to a legendary image with Stalin fooling around. I hope that you like them as much as I do. Young skater with safety cushion Dutch boy with a pillow strapped on his backside in order to soften the falling on ice while skating. Cabaret Dancers Cabaret dancers wearing fake mustaches. Einstein with Einstein Puppet The photo was taken by Harry Burnett at Cal Tech in Pasadena where Albert Einstein was teaching. Public Call A photograph of the making of a programme by the BBC about driving errors, taken by Saidman in 1939 for the Daily Herald. Stalin pulling a face at his bodyguard Stalin is captured in this photograph by Lt. Baby Cage

Experimental Light Painting Self-Portraits Self-portraits aren’t exactly ground-breaking — in fact, the word “selfie” was recently added to the dictionary — but Alex DeForest‘s self-portraits are anything but ordinary. His interesting creations mix light painting techniques with self-portrait photography to create some pretty cool results. We caught up with DeForest via e-mail, and he gave us a little insight into how he creates his experimental portraits: For most of my self portraits I sat on an ice chest in a small spare bedroom full of boxes and shelves. Typically I line up my shot first, get the focus, then put my remote on the floor so I can trigger it with my big toe. Maybe there is an easier way but I have fun. The artist who inspired him to experiment the way he does include Patrick Rochon and Aurora Crowley, both of which were featured on PBS back in 2011. You might imagine that some of these photos took some serious planning, but for the most part, DeForest enjoys just “winging it,” so to speak.

The Great Depression in Colored Photographs Color presents an entirely different image. This is a photograph of Faro and Doris Caudill, farmers in Pietown, New Mexico. They lived in a dugout and struggled to survive on Resettlement Administration land. As the 1930s came to a close, Kodak came out with Kodachrome film – the first commercially viable color film available to the general public. Now, not just anybody could buy this film. Urban America New York City was the metropolis of America. Times Square was the happening place. Washington was a city of contrasts – the New Deal having extended its influence across the nation. But it was still very much a Southern city – especially if you were African American. Chicago was the transportation, food, and manufacturing center of the country. And the Southside was still an industrial neighborhood of steel mills and packing houses. New Orleans was the largest city in the South – not Atlanta. Rural America

The 23 Photos That Will Make Your Stomach Drop | Marine Chic Posted by admin on May 1, 2013 in Nature | 39 comments If you love to do something that is uncommon, and what people do just few times in whole year, than you must try to do something like this on photos below. Maybe you will feel strange while you looking at this photos, you will see, who knows. 1. Cliff camping. 2. 3. 4. 5. 6. 7. 8. 9. 10. 11. 12. 13. 14. 15. 16. 17. 18. 19. 20. 21. 22. 23. Living Photos by Arthur Mole and John Thomas Taken at the beginning of the 20th century, by English photographer Arthur S. Mole and his American colleague John D. Thomas, these living photographs show thousands of American soldiers posing as symbols of American history. I’ve seen a few of these living photos on the internet before, but it’s nice to finally find some real info about them, like what they represent and how many people were needed to create them. via Telegraph.co.uk The Living Uncle Sam: 19,000 officers and men at Camp Lee, Virginia, January 13, 1919 The Human US Shield: 30,000 officers and men at Camp Custer, Battle Creek, Michigan, 1918 The living emblem of the United States Marines, formed by 100 officers and 9,000 enlisted men at the Marine Barracks, Paris Island, South Carolina A portrait of President Woodrow Wilson, formed of 21,000 officers and men at Camp Sherman, Chillicothe, Ohio, 1918 The Human Liberty Bell, formed by 25,000 officers and men at Camp Dix, New Jersey, 1918 Reddit Stumble

The Wondrous Design Magazine (1913) Union Army veteran with a Confederate veteran at the Gettysburg celebration, PA We declare the world as our canvas106 of the most beloved Street Art Photos - Year 2012 Click on a photo and you make it bigger and can post a comment on it. And thats some of the most beloved Street Art Photos posted in 2012 on Street Art Utopia! A member of Street Art Utopia on Facebook wrote two year ago this nice piece about the future: – My son, do you want to hear something strange? – Yes! – You know the new tree painting we did on the garage last week.. – What? – Well, yes, many were. – Was art forbidden? – Well no, but it had to be in special buildings only. – Wow.. – Yes, my son.

Portraits from Ellis Island c1900s, in Color 5 Ways to Turn Zippers into Awesome Arm Candy UPDATE: By popular demand, Zipper Bracelet Kits ($15) and readymade Zipper Bracelets ($20) are now available in the Brit + Co. shop! You know we love turning unconventional materials into wearable accessories. Today, we’re tackling zippers! Materials: - zippers - E-6000 quick hold contact adhesive - velcro or snap buttons - leather crimps + clasps - Tools: needle nose pliers, sharp scissors First thing to do is get your zippers! 1. These bangles are sweet, and have a definite friendship bracelet vibe. Use colored zippers for these, in whatever colors you like. Attach cord ends so that you can add a clasp and loop. 2. For this one, you’ll want a zipper with some contrast. We chose a black zipper with gold teeth. 3. This one is silly simple! Get a zipper with a more interesting material like denim. 4. This one is definitely the most complicated but it’s still pretty simple! Take a long zipper and cut it in half (make sure it fits around your wrist twice!). 5. Last, the wrap bracelet!

Restored Photos of Shackleton’s Fateful Antarctic Voyage This photo was taken when the crew felt they had a good chance of freeing the trapped Endurance from the sea ice of the Weddell Sea, so they put the sails up. As we know, this and other attempts failed, and realizing the ship wasn’t moving Hurley went onto the ice to take this photograph. New details of sea ice have been revealed. In what may be one of history’s most famous successful failures, explorer Sir Ernest Shackleton and 27 other men set out on the Imperial Trans-Antarctic Expedition in 1914 to make what they hoped would be the first land crossing of Antarctica. After 80 years of storing the original glass plate and celluloid negatives, RGS along with the Institute of British Geographers (IBG) has digitized over 90 images for the public. Photo by Frank Hurley 1914-1917. Photo by Frank Hurley 1914-1917. Even modern photography would have been difficult in the antarctic conditions, but for Hurley it was nearly impossible. Complete darkness was also a difficulty during the trip.

The 1922 discovery of Tutankhamun in color pictures