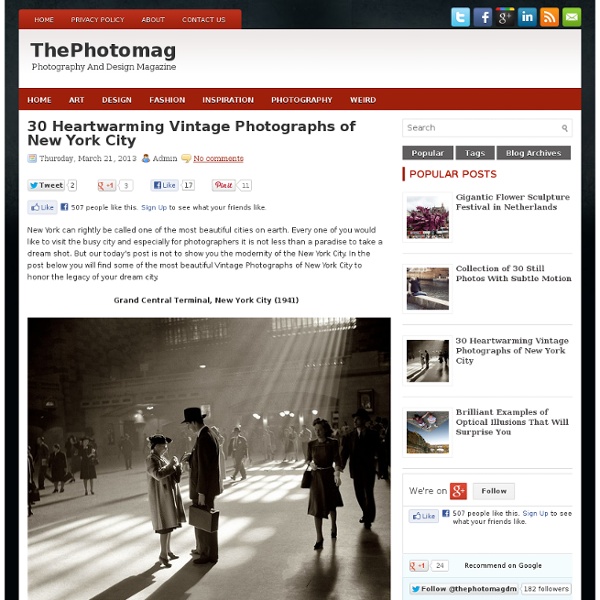 55 incredible examples of photo manipulation We present collection of 55 incredible examples of photo manipulation. Some of them... you may know already, but another ones... could be new for you. What I'm sure about... all of them are simply worth of your attention. Black and White Old Pictures of Pets You are here: Home / Dogs / Black and White Old Pictures of Pets Keep in themselves represent a kind of memories, especially when they are on your pets … especially when you find something like this and these are pictures in black and white from the beginning and middle of the twentieth century … Pets Foto Daily Choose

Top 100 Photos of the Year 2012 *Please note the photographs themselves were not necessarily taken in 2012, they just happened to be featured as a POTD this year. The pictures are also listed in reverse chronological order. There is no ranking amongst the photos Enjoy! Photograph by Robert Elves on Flickr Photograph by Stephen Wilkes | Prints available

Weird Vintage Halloween Costumes By Charlie Hintz on October 1, 2013 Long ago, before the glossy scourge of prepackaged superheros and princess costumes, Halloween brought ghouls and goblins into the night, terrorizing the neighborhood with their fiendish cackling and unholy demands for candy. In volume one of the Cult of Weird vintage Halloween costume roundup we explore the bizarre intersection of Halloween and technology where cameras collided with a unique era of DIY costume making.

Getty Images best of 2015 [PHOTOS] Female inmates gather with babies as they greet visitors in the Pedrinhas Prison Complex, the largest penitentiary in Maranhao state, on January 27, 2015 in Sao Luis, Brazil. Previously one of the most violent prisons in Brazil, Pedrinhas has seen efforts from a new state administration, new prison officials and judiciary leaders from Maranhao which appear to have quelled some of the unrest within the complex. In 2013, nearly 60 inmates were killed within the complex, including three who were beheaded during rioting. Much of the violence stemmed from broken cells allowing inmates and gang rivals to mix in the patios and open spaces of the complex.

Women taking photobooth ‘selfies’ from the 1900s to the 1970s (and beyond) Going to the photobooth at the local Woolworth’s was a special event, which meant getting dressed up, smoothing down hair, wearing those clothes kept for Jesus on a Sunday. This was a chance to show what you were truly like to a loved one, or a friend, or a distant relation, or maybe a blank official stamping your passport. The photobooth was a private place to show your public face, to be seen how you wanted the world to see you. In the 1970s, I recall how a lot of teenagers spent their money crammed in photobooths taking a strip of four snaps that sealed their love or friendship, or some idealised vision of themselves.

50 Pictures That Will Take Your Breath Away We have recently seen many inventions and advancements, some of them related to technology while others cover everything ranging from healthcare to creative arts. But when it comes to capturing all these moments and achievements, nothing does a better job than a well timed photograph. After scouring through the web for such photographs, we have managed to pull a modest list of The Top 50 Pictures that you must check and share with your friends.

Casting Herself i, Photographer by Degas, Picasso, Rembrandt and More After Vermeer After Magritte Stages is the title of a self-portrait project by American photographer Laura Hofstadter. After experimenting with a large format camera and discovering a thrill in re-creating classical paintings using simple household props, Hofstadter embarked on this photographic narrative to illustrate the varying transformative stages of life that we pass through universally, as well as those of loss and aging.

50 Astonishing Animal Photos of 2015 TIME looks back over the past 12 months and presents a selection of astonishing animal images 50 Astonishing Animal Photos of 2015 Lintao Zhang—Getty Images A flock of sheep walk in the haze in a Beijing suburb, China, Jan. 15, 2015. There are few things more enjoyable and humorously entertaining than cute animals and their offspring making amusing expressions, acting in surprising ways or awkwardly mocking human gestures.