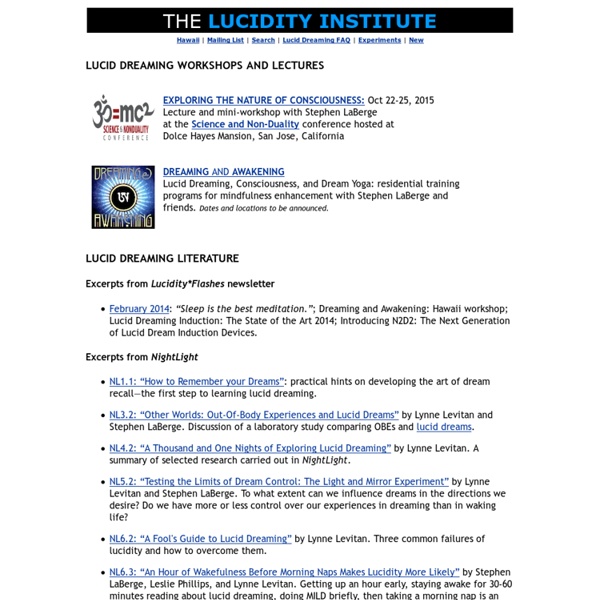 Lifestyle Design Experiments This is the place where you find all the lifestyle design experiments I'm sharing online. A lifestyle design experiment is where we take a simple idea or radical lifestyle concept and give it a test run in our lives. We're only obligated to it for 30 days, enough time to form it into a habit. After the 30 days are up, we can choose to let go of the idea if it's not serving us, or keep it.

Lucid dream A lucid dream is any dream in which one is aware that one is dreaming. In relation to this phenomenon, Greek philosopher Aristotle observed: "often when one is asleep, there is something in consciousness which declares that what then presents itself is but a dream".[1] One of the earliest references to personal experiences with lucid dreaming was by Marie-Jean-Léon, Marquis d'Hervey de Saint Denys.[2] Skeptics of the phenomenon suggest that it is not a state of sleep, but of brief wakefulness.[15][16] Others point out that there is no way to prove the truth of lucid dreaming other than to ask the dreamer.[17] Lucid dreaming has been researched scientifically, with participants performing pre-determined physical responses while experiencing a lucid dream.[18][19] Scientific history[edit] Philosopher Norman Malcolm's 1959 text Dreaming[22] had argued against the possibility of checking the accuracy of dream reports. Hearne's results were not widely distributed.

Lucid Dreaming/Induction Techniques This page describes a number of lucid dream induction techniques. It is recommended that you be able to recall at least one dream per night in order to maximize the effectiveness of these methods. Preliminary Knowledge[edit] Certain elements are common to many of the lucidity-inducing techniques discussed later in this chapter. To better understand these techniques, these common components will be discussed first. Sleep Interruption[edit]

Psychophysiology of Lucid Dreaming by Stephen LaBerge, Ph.D. Lucid Dreaming Physiologically Verified Although we are not usually explicitly aware of the fact that we are dreaming while we are dreaming, at times a remarkable exception occurs, and we become conscious enough to realize that we are dreaming. "Lucid" dreamers (the term derives from van Eeden, 1913) report being able to freely remember the circumstances of waking life, to think clearly, and to act deliberately upon reflection, all while experiencing a dream world that seems vividly real (Green, 1968; LaBerge, 1985; Gackenbach & LaBerge, 1988). This is all in contrast to the usual past characterization of dreams as typically lacking any reflective awareness or true volition (Rechtschaffen, 1978). Lucid dreaming is normally a rare experience. Though most people report having had a lucid dream at least once in their lives, only about 20% of the population reports having lucid dreams once a month or more (Snyder & Gackenbach, 1988).

Before I Die & Candy Chang What is important to you 2011 After Candy Chang lost someone she loved, she went through a long period of grief and depression. With time she felt gratitude for the time they had together and eventually she found clarity in her life by contemplating death so much. But she struggled to maintain this perspective. All About the Lemon Juice and Maple Syrup Detox The third time i caved in on the lemon juice and maple syrup detox diet I knew i needed help. I did not want to fail partly because i had $100 riding on it, partly because of my ego but i think it was really because I wanted it to work deep down. MY cynical nature could not cover up the fact i was fat, i was bloated and i was sick of being sick! I went online and did my research. I found out about the founder of the master cleanse diet as it is also called; Stanley Burroughs. I have to say i do not agree with everything he said but once i completed the detox i must admit he had many things right.

Carlos Castaneda Carlos Castaneda (birthdate unclear – died April 27, 1998),[1] was an American author with a Ph.D. in anthropology. Early life[edit] He moved to the United States in the early 1950s and became a naturalized citizen in 1957. Castaneda was educated at UCLA (B.A. 1962; Ph.D. 1973).[2] Career[edit] Castaneda's first three books – The Teachings of Don Juan: A Yaqui Way of Knowledge; A Separate Reality; and Journey to Ixtlan – were written while he was an anthropology student at the University of California, Los Angeles (UCLA).

Living Inside Your Dreams: Astral Projection Dream Awareness, Lucid Dreaming and Astral Projection By Robert Zucker "Living Inside of Your Dreams" is a condensed version of two manuscripts developed during a college independent study in the late 1970s. The subjects of dreams, hermetics and cultural similarities were explored. Hundreds of pages were condensed from thousands of pages of notes. Lucid Dreaming “It’s the only way to fly.” Lucid dreaming is the experience of being completely aware within a dream that you are, in fact, in a dream. This realization leads to complete power for the dreamer, allowing him/her to go anywhere and do anything in their dream. The Most Effective Way to Create New Habits Do you have problems forming and sticking to new habits? Do you have a tiny case of OCD? Then this is the ultimate self-improvement technique for you.

Hypnagogia and Hypnopompia Hypnagogia is the imagery, sounds and strange bodily feelings that are felt at “sleep onset.” This is a simplification though, as researchers have noted hypnagogic imagery in the lab at periods of quiet wakefulness as well as stage 1 sleep. Others have correlated hypnagogia with pre-sleep alpha waves and also REM intrusion into sleep onset. The truth is that the wake-sleep transition is still not understood. And neither are its trippy visuals. whispy lights, multi-dimentional geometric objects, or a sudden image like a stranger’s face Lucid Dreaming is an Ancient Practice Introduction Lucid dreaming was taken very seriously by some cultures during ancient times. For example, in the 8th Century, TheTibetan Book of the Dead described of a form of Yoga designed to become conscious while dreaming. Yoga of the Dream State “Milam,” the Yoga of the Dream State is one of many different types of Yogas practiced by Tibetan Buddhists. The intention of this form of Yoga is to help to attain spiritual power and enlightenment or “awakening.”

Can B6 Keep Me Awake At Night? Insomnia by Smiley Stew People interested in their dreams have long noted the fascinating relationship between Vitamin B6 and dreams. My own interest in dreams is no exception: one of the earliest blog posts I ever wrote about documented my dream reports after taking B6.