4 Secrets To Achieving The Deepest Sleep Possible. Once upon a time, on the nights when my wife had trouble sleeping, she would close her eyes, lie on her back, and say, “teach me how to sleep.” 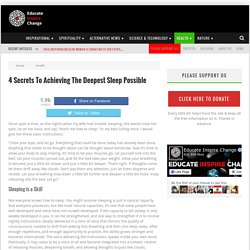 In my best lulling voice, I would give her these basic instructions: “Close your eyes, and let go. Everything that could be done today has already been done. Anything that needs to be thought about can be thought about tomorrow. Now it’s time to allow your body to stop moving. Sleeping is a Skill Not everyone knows how to sleep. Some people know how to sleep, but under stress seem to forget. Telling the Truth More often than not, the thoughts that plague people when trying to sleep are about things that you haven’t said to someone you wish you could say them to. Practicing telling the truth when the person you wish to speak to isn’t around can be helpful, but it will only get you so far. Forcing the Mind to Stay Still Wakefulness is a state of consciousness. The yogis call this practice tratak. Defocusing the Mind The Counseling Perspective.

Place This Mixture Under Your Tongue Before Bed And You'll Never Wake Up Tired. No matter how old they are, I hear people almost everyday complain: “I’m so tired!” 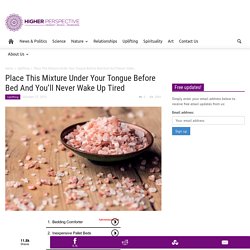 Instead of getting the recommended 8 hours of sleep every night, most people have been averaging 6-7. While this doesn’t sound like a huge difference, it can have a huge effect on your body. Your body needs 8 hours of sleep in order to recharge. Many people think caffeine can make up for the lost sleep, but it definitely can’t! It may amp you up for a short period of time, but after that, expect a crash. Turning off the TV and stepping away from the computer an hour before going to bed can be a huge help as well. Thankfully, there is a natural remedy to sleep deprivation that many people already have in their kitchen. The video below explains the amazing health benefits of Himalayan sea salt. All you have to do is combine 5 teaspoons of raw, organic honey with 1 teaspoon of pink Himalayan sea salt in a jar. The following video will explain everything in detail! How To Double The Quality Of Your Sleep. How to Sleep Better. Russell Foster: Why do we sleep? 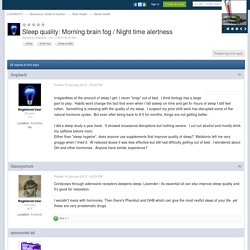 I find it gives more of a kick than caffeine but it also upsets my gut. I have mild gastritis and drink too much coffee already so think the l-theanine pushes me over the edge. It seems to have a positive effect but does not cure my morning fatigue.Macuna pruriens is supposed to actually contain l-dopa. L-tyrosine is also supposed to increase it. I'm skeptical about some of what's quoted above.

First, coffee is an enormous source of gut problems for many people, whereas I've never heard of or seen anything, prior to your comment, to suggest any such problem due to l-theanine. Coffee causes gastritis, this is well known and you can find plenty of documentation of it. In the intervening time, I've taken to consuming caffeine mixed with a few amino acids, which I take first thing in the morning. If you drink coffee throughout the day then it is guaranteed to mess up your sleep patterns.

Try This DIY Foot Reflexology Before Bed For The Best Sleep Ever. A good night’s sleep? 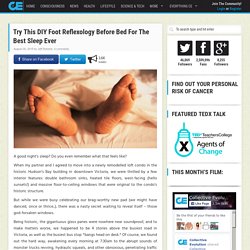 Do you even remember what that feels like? When my partner and I agreed to move into a newly remodelled loft condo in the historic Hudson’s Bay building in downtown Victoria, we were thrilled by a few interior features: double bathroom sinks, heated tile floors, west-facing (hello sunsets!) And massive floor-to-ceiling windows that were original to the condo’s historic structure.

But while we were busy celebrating our brag-worthy new pad (we might have danced, once or thrice..), there was a nasty secret waiting to reveal itself – those god-forsaken windows. Being historic, the gigantuous glass panes were nowhere near soundproof, and to make matters worse, we happened to be 4 stories above the busiest road in Victoria, as well as the busiest bus stop *bangs head on desk.* Of course, we found out the hard way, awakening every morning at 7:30am to the abrupt sounds of monster trucks revving, hydraulic squeals, and other obnoxious, penetrating traffic clatter. 1. 2. 3. Sleep Hygiene.