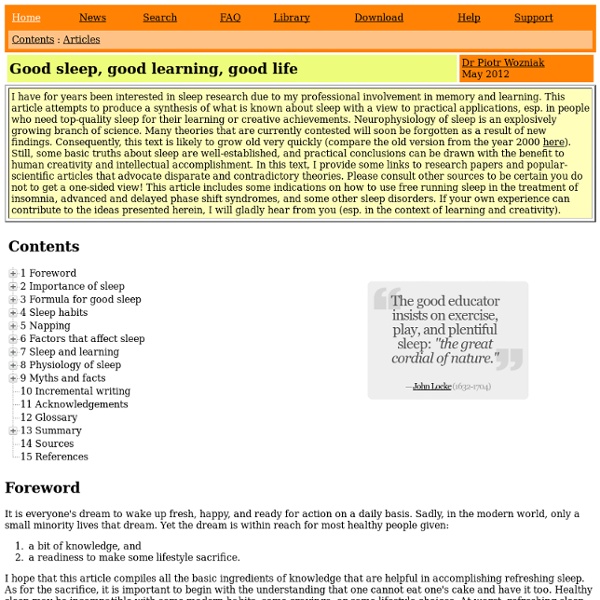 Foreword It is everyone's dream to wake up fresh, happy, and ready for action on a daily basis. Sadly, in the modern world, only a small minority lives that dream. Yet the dream is within reach for most healthy people given: a bit of knowledge, and a readiness to make some lifestyle sacrifice. I hope that this article compiles all the basic ingredients of knowledge that are helpful in accomplishing refreshing sleep. This article was originally written a decade ago. This article is a compilation of the most important and the most interesting things about the biology of sleep. Since writing the original Good sleep, good learning, good life, tremendous progress has been made in the science of sleep. As the article grew to be insanely long, you may wish to begin with the summary at the bottom of the article. Notes Incremental writing: Due to the size of the material, this article was written using a technique called incremental writing. Importance of sleep Why understanding sleep is important?

Psychology Today: How to Get Great Sleep Blame it on the Industrial Revolution. Or maybe on the light bulb. But ever since man met machine, sleep has been on the skids. In 2001, 38 percent of U.S. adults said they were sleeping less than they were just five years earlier. Americans now average seven hours in bed per night, and close to 60 percent now report they have trouble sleeping at least a few nights every week. Seduced by 24-hour casinos, reruns and the Internet, Americans have plenty of diversions to keep them wired and alert.

How to Sleep More Effectively, Starting Tonight at Personal Development with Ririan Project “There is a time for many words, and there is also a time for sleep.” - Homer Tired after getting a full nine hours and still feeling exhausted? You sleep the sleep of the innocent – you nod off quickly, don’t have nightmares and have no trouble breathing – and still you can hardly get up in the morning and seldom feel totally awake, no matter how long you slept the previous night. You are suffering from a clear-cut case of ineffective sleep. Tips for getting to sleep faster &amp; sleeping better by Josh For practically all my life I’ve had trouble going to sleep. I’m not an insomniac…I just think a lot.

Polyphasic Sleep: Facts and Myths Contents The law of accelerating returns We live in the times of accelerating acceleration. The Moore's Law makes the world smaller, faster, more connected and more efficient. We are now able to touch and feel Kurzweil's generalization: the law of accelerating returns . The fast-living young generation is hungry for more. Polyphasic Sleep A couple days ago, I saw a post about polyphasic sleep on LifeHack.org. Since then I’ve been emailed about this topic as well, probably because I’ve written previously about becoming an early riser. Polyphasic sleep involves taking multiple short sleep periods throughout the day instead of getting all your sleep in one long chunk. A popular form of polyphasic sleep, the Uberman sleep schedule, suggests that you sleep 20-30 minutes six times per day, with equally spaced naps every 4 hours around the clock. This means you’re only sleeping 2-3 hours per day.

Understanding Sleep: Deep Sleep, REM Sleep, Cycles, Stages, and The power of sleep Many of us try to sleep as little as possible. There are so many things that seem more interesting or important than getting a few more hours of sleep, but just as exercise and nutrition are essential for optimal health and happiness, so is sleep. Newborn - Sleep Patterns - Lucile Packard Children&#039;s Hospital What are the sleep patterns of a newborn? The average newborn sleeps much of the day and night, waking only for feedings every few hours. It is often hard for new parents to know how long and how often a newborn should sleep. Unfortunately, there is no set schedule at first and many newborns have their days and nights confused - they think they are supposed to be awake at night and sleep in the daytime.

Sleep: The secret to a sound sleep lies inside the brain, researchers find - latimes.com I am frequently amazed by my husband's ability to sleep through all kinds of noises that cause me to wake in a flash -- car alarms, smoke detectors that are running low on batteries, and especially kids who have lost track of their favorite blankie in the middle of the night. Thanks to a new study being published in Tuesday's edition of the journal Current Biology, I now know that his brain probably produces more sleep spindles than mine. You see, while we're sleeping, the thalamus -- the part of the brain that receives sensory input like sounds -- tries to relay information to the cortex, where the sounds are actually perceived. Sleep experts can see these transmissions on an electroencephalography test, or EEG. But, scientists believe, sometimes the brain throws up roadblocks to prevent the cortex from being disturbed during crucial periods of sleep when memories are consolidated. These roadblocks are sleep spindles, which also have a characteristic appearance on an EEG.