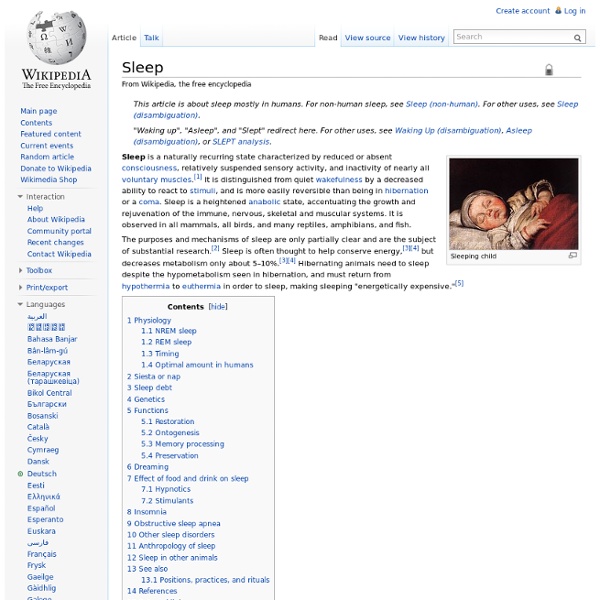 Sleeping is associated with a state of muscle relaxation and limited perception of environmental stimuli. The purposes and mechanisms of sleep are only partially clear and the subject of substantial ongoing research.[2] Sleep is sometimes thought to help conserve energy, though this theory is not fully adequate as it only decreases metabolism by about 5–10%.[3][4] Additionally it is observed that mammals require sleep even during the hypometabolic state of hibernation, in which circumstance it is actually a net loss of energy as the animal returns from hypothermia to euthermia in order to sleep.[5] Humans may suffer from a number of sleep disorders. These include dyssomnias (such as; insomnia, hypersomnia, and sleep apnea) and parasomnias (such as sleepwalking and REM behavior disorder; and the circadian rhythm sleep disorders). Physiology[edit] Hypnogram showing sleep cycles from midnight to 6.30 am, with deep sleep early on. Stages[edit] 30 seconds of deep (stage N3) sleep. REM sleep[edit] Related:  health

sleepyti.me bedtime calculator Review of Galantamine: the Lucid Dreaming Pill | The Dream Studies Portal So you’re considering the red pill… Galantamine has emerged as THE lucid dreaming pill. This natural supplement has been used for centuries in China as a memory enhancer, and was even noted by the ancient Greeks for its powerful mind-inducing effects. Now we know that galantamine indirectly promotes dreaming sleep as well as lucid dreaming, which is the art of becoming self-aware in your dreams. There’s a lot of hype about galantamine, so I want to cover the basics about how it works on the brain, the studies that have proven its effectiveness, and my personal recommendations for experimentation with this safe and natural supplement. I also want to be brutally honest about some of the mild psychological and physical side effects as well. Want to cut to the chase? Galantamine & Memory red spider lily (Lycoris radiata) Galantamine is found in the natural world in many plant sources, including the common daffodil (Narcissus pseudonarcissus). How Galantamine Works On your Brain Laberge’s results?

10% of the Brain Myth Let me state this very clearly: There is no scientific evidence to suggest that we use only 10% of our brains. Let's look at the possible origins of this "10% brain use" statement and the evidence that we use all of our brain. Where Did the 10% Myth Begin? The 10% statement may have been started with a misquote of Albert Einstein or the misinterpretation of the work of Pierre Flourens in the 1800s. Perhaps it was the work of Karl Lashley in the 1920s and 1930s that started it. The Evidence (or lack of it) Perhaps when people use the 10% brain statement, they mean that only one out of every ten nerve cells is essential or used at any one time? Furthermore, from an evolutionary point of view, it is unlikely that larger brains would have developed if there was not an advantage. Finally, the saying "Use it or Lose It" seems to apply to the nervous system. So next time you hear someone say that they only use 10% of their brain, you can set them straight. "We use 100% of our brains."

Stress (psychological) In psychology, stress is a feeling of strain and pressure. Small amounts of stress may be desired, beneficial, and even healthy. Positive stress helps improve athletic performance. Stress can be external and related to the environment,[1] but may also be created by internal perceptions that cause an individual to have anxiety or other negative emotions surrounding a situation, such as pressure, discomfort, etc., which they then deem stressful. Humans experience stress, or perceive things as threatening, when they do not believe that their resources for coping with obstacles (stimuli, people, situations, etc.) are enough for what the circumstances demand. A very much overlooked side of stress is its positive adaptations.[2] Positive psychological stress can lead to motivation and challenge instead of anxiety. Selye proposed that there are four variations of stress.[4] On one axis, there is good stress (eustress) and bad stress (distress).

10 Benefits of Rising Early, and How to Do It | zen habits “Early to bed and early to rise makes a man healthy, wealthy and wise” – Ben Franklin, famously “Put no trust in the benefits to accrue from early rising, as set forth by the infatuated Franklin …” – Mark Twain By Leo Babauta Recently, reader Rob asked me about my habit of waking at 4:30 a.m. each day, and asked me to write about the health benefits of rising early, which I thought was an excellent question. Unfortunately, there are none, that I know of. However, there are a ton of other great benefits. Now, let me first say that if you are a night owl, and that works for you, I think that’s great. Greet the day. How to Become an Early Riser Don’t make drastic changes. Alternate Sleep Cycles Most people only think that there is one way to sleep: Go to sleep at night for 6-8 hours, wake up in the morning, stay awake for 16-18 hours and then repeat. Actually, that is called a monophasic sleep cycle, which is only 1 of 5 major sleep cycles that have been used successfully throughout history. The other 4 are considered polyphasic sleep cycles due to the multiple number of naps they require each day. Well the most important of every sleep cycle is the Stage 4 REM (Rapid Eye Movement) sleep, which has been shown to provide the benefits of sleep to the brain above all other stages of sleep. This way, you still get the benefits of 8 hours of sleep without wasting all of the time it takes to get to REM cycles, resulting in a much more efficient sleep cycle. Uberman Cycle: 20 to 30 minute naps every 4 hours, resulting in 6 naps each day. Everyman Cycle: One longer “core” nap that is supplemented with several 20-30 minute naps. Dymaxion Cycle: Biphasic/Siesta Cycle: – Hang in there.

File:Exercise zones.png mental_floss Blog » How to Learn Fast: Clever Tips from Tim Ferr Tim Ferriss is a New York Times best-selling author, widely known for his book The Four-Hour Work Week. Not only has he cracked the secrets of productivity, he's figured out how to learn things super quickly! Mental Floss' own Chetan Nandakumar managed to snag a few minutes with him. We're interested in this notion of rapid learning. Things like Argentine tango, for example . Yabu-what? Yabusame is Japanese horseback archery. I've also read that you became a National Chinese Kickboxing Champion in almost no time. Sure. Are there some overarching principles that apply across domains? The first is that material is more important than method . Point two is association, basically the power of associative memorization. The third important thing is self-observation, which is critically important. Your rapid learning approach seems to require a lot of analysis and self-observation. Are there any limits to what someone can learn? Well, there are a few. Any thoughts on education in schools?

Aerobic exercise Cardio. Aerobic exercise (also known as cardio) is physical exercise of relatively low intensity that depends primarily on the aerobic energy-generating process.[1] Aerobic literally means "living in air",[2] and refers to the use of oxygen to adequately meet energy demands during exercise via aerobic metabolism.[3] Generally, light-to-moderate intensity activities that are sufficiently supported by aerobic metabolism can be performed for extended periods of time.[1] The intensity should be between 60 and 85% of maximum heart rate. When practiced in this way, examples of cardiovascular/aerobic exercise are medium to long distance running/jogging, swimming, cycling, and walking, according to the first extensive research on aerobic exercise, conducted in the 1960s on over 5,000 U.S. Air Force personnel by Dr. Aerobic versus anaerobic exercise[edit] Fox and Haskell formula showing the split between aerobic (light orange) and anaerobic (dark orange) exercise and heart rate. Criticisms[edit]

Wired 15.01: My 4-Week Quest: Be Smarter Everyone wants a better body, a sharper mind, or both. But how? To find the answer, Wired sent writers on three different challenges: For one month, do everything possible (and legal) to run faster, get smarter, or shoot straighter. And keep a diary. By Joshua GreenPage 1 of 1 THERE COMES A TIME IN EVERYONE'S life – usually past age 30 and just after you've done something boneheaded like pour coffee on your cereal – when the thought hits you: "I wish I were smarter." Story Tools Story Images Click thumbnails for full-size image: WEEK ONE: I begin my experiment by playing Brain Age, a Nintendo DS game based on the research of Japanese neuroscientist Ryuta Kawashima. I start a regimen of Brain Age training and consult several neuroscientists about how to jump-start my tired noggin. On the advice of Charles Czeisler, a professor of sleep medicine at Harvard Medical School, I start getting more shut-eye. WEEK TWO: More lifestyle changes. I also learn (more) about the wonders of coffee.

Reminder ideas for your goals Here are some ways to remind yourself to go for a walk, eat more fruit, drink more water, or follow through with any other goal you set for yourself. It’s easy to forget to do these things once you get busy with your regular daily routine, especially if it’s a new behavior. Reminders can help interrupt the ‘autopilot mode’ of your day and help you achieve your goal. Use related objects If your goal is to drink more water, keep water bottles at your desk and around your house.If your goal is to eat more fruit, keep fruit visible on your desk, on the top shelf of your fridge, and on your kitchen counter. (healthy kitchen tips)If your goal is to go for a walk in the morning, keep your walking shoes in front of your bedroom door so you have to walk over them as you leave the room. Write on post it notes: Write your goal on post-it notes and put them in places you’ll see throughout the day. 35+ places to keep reminders Upload pictures Set alarms Schedule appointments Send messages Ask people

If You Are Fit, You Can Take It Easy Pamplemousse/Getty Images New Year’s resolutions tend to war with wintertime malaise. Resolution urges you to work out. Malaise suggests that you linger in bed. But there’s good news for those of us torn between these impulses. The most sobering of the recent studies, published last month in The British Journal of Sports Medicine, looked at a large group of retired elite male athletes, most now in their 50s. Similarly, although in a more compressed time frame, a study published earlier this year found that when a group of world-class kayakers completely quit training (at the end of a competitive season), they rapidly lost strength and endurance. In other words, being almost completely inactive, whether for a short or prolonged period of time, inexorably de-tones muscles and compromises health. But there is a loophole. The researchers then randomly assigned the volunteers to different groups for the next eight months. There are caveats to these encouraging findings, of course.