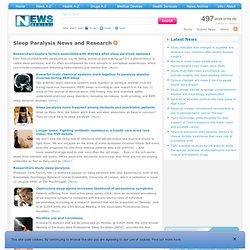 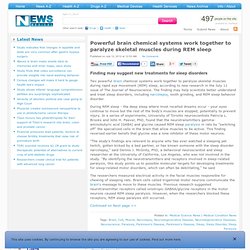 The finding may help scientists better understand and treat sleep disorders, including narcolepsy, tooth grinding, and REM sleep behavior disorder. During REM sleep - the deep sleep where most recalled dreams occur - your eyes continue to move but the rest of the body's muscles are stopped, potentially to prevent injury. In a series of experiments, University of Toronto neuroscientists Patricia L. Brooks and John H. Peever, PhD, found that the neurotransmitters gamma-aminobutyric acid (GABA) and glycine caused REM sleep paralysis in rats by "switching off" the specialized cells in the brain that allow muscles to be active. The researchers measured electrical activity in the facial muscles responsible for chewing of sleeping rats. Researchers study sleep paralysis. Published on August 14, 2009 at 12:14 AM If you’ve never heard of sleep paralysis you’re lucky, according to the paper: “It appears that up to 50 per cent of the population will experience sleep paralysis in one form or another at least once in their lifetime, and some people experience it far more often than that”. 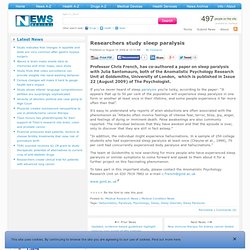 It’s easy to understand why reports of alien abductions are often associated with the phenomenon as “Attacks often involve feelings of intense fear, terror, bliss, joy, anger, and feelings of dying or imminent death. False awakenings are also commonly reported. The individual believes that they have awoken and that the episode is over, only to discover that they are still in fact asleep.”

“In addition, the individual might experience hallucinations. The team at Goldsmiths is now searching for more people who have experienced sleep paralysis or similar symptoms to come forward and speak to them about it for a further project on this fascinating phenomenon. www.gold.ac.uk. Alien abduction may be all in the mind. They also believe more strongly in the paranormal and claim to have experienced more paranormal activity than the wider public. 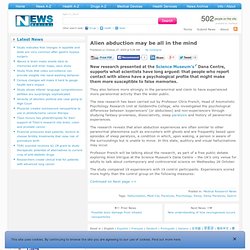 The new research has been carried out by Professor Chris French, Head of Anomolistic Psychology Research Unit at Goldsmiths College, who investigated the psychological differences between ‘experiencers’ (or abductees) and non-experiencers through studying fantasy-proneness, dissociativity, sleep paralysis and history of paranormal experiences. The research reveals that alien abduction experiences are often similar to other paranormal phenomena such as encounters with ghosts and are frequently based upon episodes of sleep paralysis, a condition in which, upon waking, a person is aware of the surroundings but is unable to move.

In this state, auditory and visual hallucinations may occur. The study compared 19 experiencers with 19 control participants. Experiencers scored more highly than the control group on the following measures: Brain Chemicals That Cause Sleep Paralysis Discovered. During the most dream-filled phase of sleep, our muscles become paralyzed, preventing the body from acting out what's going on in the brain. Now, researchers have discovered the brain chemicals that keep the body still in sleep. The findings could be helpful for treating sleep disorders, the scientists report Wednesday (July 18) in The Journal of Neuroscience. The brain chemicals kick into action during rapid eye movement (REM) sleep, a phase that usually begins about 90 minutes into a night's rest.

Sleep paralysis. Sleep state in which a person is awake but unable to move or speak Medical condition We ask you, humbly: don't scroll away. 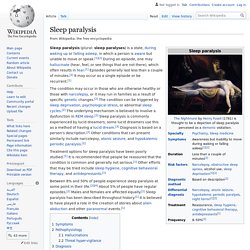 Hi reader, this Tuesday, for the 2nd time recently, we ask you to protect Wikipedia's independence. Thanks to the 2% of readers who donate, Wikipedia and the free knowledge movement are thriving. If you benefit from Wikipedia, please donate to keep it growing. Thank you! Sleep paralysis is a state, during waking up or falling asleep, in which a person is aware but unable to move or speak.[1][2] During an episode, one may hallucinate (hear, feel, or see things that are not there), which often results in fear.[1] Episodes generally last less than a couple of minutes.[2] It may occur as a single episode or be recurrent.[1] Signs and symptoms[edit]