How Much Sleep Do You Need? Sleep Cycles & Stages, Lack of Sleep & Getting the Hours You Need 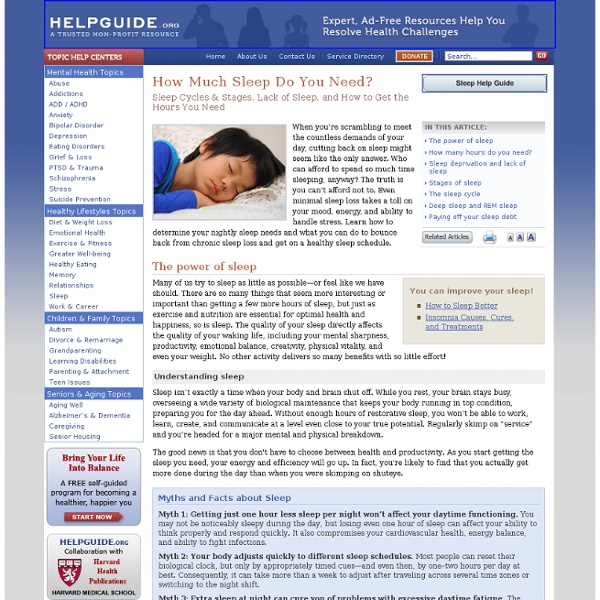 The power of sleep Many of us try to sleep as little as possible. There are so many things that seem more interesting or important than getting a few more hours of sleep, but just as exercise and nutrition are essential for optimal health and happiness, so is sleep. The quality of your sleep directly affects the quality of your waking life, including your mental sharpness, productivity, emotional balance, creativity, physical vitality, and even your weight. No other activity delivers so many benefits with so little effort! Understanding sleep Sleep isn’t exactly a time when your body and brain shut off. The good news is that you don't have to choose between health and productivity. Myths and Facts about Sleep Myth 1: Getting just one hour less sleep per night won’t affect your daytime functioning. Myth 2: Your body adjusts quickly to different sleep schedules. Myth 3: Extra sleep at night can cure you of problems with excessive daytime fatigue. How many hours of sleep do you need? REM sleep

Alternate Sleep Cycles Most people only think that there is one way to sleep: Go to sleep at night for 6-8 hours, wake up in the morning, stay awake for 16-18 hours and then repeat. Actually, that is called a monophasic sleep cycle, which is only 1 of 5 major sleep cycles that have been used successfully throughout history. The other 4 are considered polyphasic sleep cycles due to the multiple number of naps they require each day. How is this possible? Well the most important of every sleep cycle is the Stage 4 REM (Rapid Eye Movement) sleep, which has been shown to provide the benefits of sleep to the brain above all other stages of sleep. This way, you still get the benefits of 8 hours of sleep without wasting all of the time it takes to get to REM cycles, resulting in a much more efficient sleep cycle. Uberman Cycle: 20 to 30 minute naps every 4 hours, resulting in 6 naps each day. Everyman Cycle: One longer “core” nap that is supplemented with several 20-30 minute naps. Dymaxion Cycle: Biphasic/Siesta Cycle:

Sleep: The secret to a sound sleep lies inside the brain, researchers find - latimes.com I am frequently amazed by my husband's ability to sleep through all kinds of noises that cause me to wake in a flash -- car alarms, smoke detectors that are running low on batteries, and especially kids who have lost track of their favorite blankie in the middle of the night. Thanks to a new study being published in Tuesday's edition of the journal Current Biology, I now know that his brain probably produces more sleep spindles than mine. You see, while we're sleeping, the thalamus -- the part of the brain that receives sensory input like sounds -- tries to relay information to the cortex, where the sounds are actually perceived. Sleep experts can see these transmissions on an electroencephalography test, or EEG. But, scientists believe, sometimes the brain throws up roadblocks to prevent the cortex from being disturbed during crucial periods of sleep when memories are consolidated. The report is online here. -- Karen Kaplan

The 28 Hour Day Brain Chemicals That Cause Sleep Paralysis Discovered | REM Sleep Disorder During the most dream-filled phase of sleep, our muscles become paralyzed, preventing the body from acting out what's going on in the brain. Now, researchers have discovered the brain chemicals that keep the body still in sleep. The findings could be helpful for treating sleep disorders, the scientists report Wednesday (July 18) in The Journal of Neuroscience. The brain chemicals kick into action during rapid eye movement (REM) sleep, a phase that usually begins about 90 minutes into a night's rest. This paralysis keeps people still even as their brains are acting out fantastical scenarios; it's also the reason people sometimes experience sleep paralysis, or the experience of waking up while the muscles are still frozen. The chemistry of sleep Exactly how the muscles are paralyzed has been a mystery, however. So University of Toronto researchers Patricia Brooks and John Peever cast a wider net. Treating sleep disorders

About | Dymaxion Duo From reading others' experiences, it takes 1-2 weeks for your body to adjust to the new schedule. The first few days, you basically deprive yourself of sleep; you still lay down for your naps, but more than likely won't sleep very well. After a while, your body starts forcing itself to get REM sleep when you take naps. The tough part here is to lay down when you are supposed to, and get up when you are supposed to. After the body transition phase, the next couple weeks are a mental transition. Good sleep, good learning, good life Foreword It is everyone's dream to wake up fresh, happy, and ready for action on a daily basis. Sadly, in the modern world, only a small minority lives that dream. a bit of knowledge, and a readiness to make some lifestyle sacrifice. I hope that this article compiles all the basic ingredients of knowledge that are helpful in accomplishing refreshing sleep. This article was originally written a decade ago. This article is a compilation of the most important and the most interesting things about the biology of sleep. Since writing the original Good sleep, good learning, good life, tremendous progress has been made in the science of sleep. As the article grew to be insanely long, you may wish to begin with the summary at the bottom of the article. Notes Incremental writing: Due to the size of the material, this article was written using a technique called incremental writing. Importance of sleep Why understanding sleep is important? Too few people realize how important sleep is! For more see:

Sleeping Tricks - Effective Techniques For Falling Asleep - StumbleUpon Stages of Sleep Usually sleepers pass through five stages: 1, 2, 3, 4 and REM (rapid eye movement) sleep. These stages progress cyclically from 1 through REM then begin again with stage 1. A complete sleep cycle takes an average of 90 to 110 minutes. Stage 1 is light sleep where you drift in and out of sleep and can be awakened easily. In stage 2, eye movement stops and brain waves become slower with only an occasional burst of rapid brain waves. Slow wave sleep comes mostly in the first half of the night, REM in the second half. In the REM period, breathing becomes more rapid, irregular and shallow, eyes jerk rapidly and limb muscles are temporarily paralyzed. Infants spend almost 50% of their time in REM sleep. As sleep research is still a relatively young field, scientists did not discover REM sleep until 1953 when new machines were developed to monitor brain activity. The brain waveform during REM has low amplitudes and high frequencies, just like the waking state. Circadian Cycles and Sleep

The Official Uberman Sleep Blog How to Sleep More Effectively, Starting Tonight at Personal Development with Ririan Project “There is a time for many words, and there is also a time for sleep.” - Homer Tired after getting a full nine hours and still feeling exhausted? The good news is that, starting tonight, you can improve the quality of your sleep. 1. It is possible to sleep too long or at the wrong time. 2. As I mentioned, there are three optimal lengths of sleep -­ but that doesn’t mean you can just choose one. 3. Most people can get away with some wildness in their routines as long as they soak up some bright light at the right time. 4. Your body was designed to sync with the cycles of nature – including daylight and darkness. 5. To get the most out of your shutdown time, keep regular hours. Overlooking the single most important thing you can do for your health is easy with all the clamor surrounding various health products in the marketplace. If you liked this article, please bookmark it on del.icio.us or vote for it on Digg.