Behaviorally Assessed Sleep and Susceptibility to the Common Cold. Study Objectives: Short sleep duration and poor sleep continuity have been implicated in the susceptibility to infectious illness. 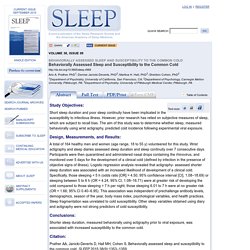 However, prior research has relied on subjective measures of sleep, which are subject to recall bias. The aim of this study was to determine whether sleep, measured behaviorally using wrist actigraphy, predicted cold incidence following experimental viral exposure. Design, Measurements, and Results: A total of 164 healthy men and women (age range, 18 to 55 y) volunteered for this study. Conclusions: Shorter sleep duration, measured behaviorally using actigraphy prior to viral exposure, was associated with increased susceptibility to the common cold. Citation: Cell. Figure 1 Experimental Design and Analytic Approach A population of (B6 × A/J) F2 mice underwent a chronic unpredictable stress protocol, data collected during which enables modeling of genetic and molecular networks underlying responses to these stresses. 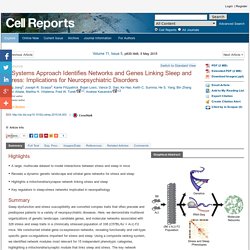 (A) The sequence of chronic unpredictable stress treatments and phenotypic data collection (see Supplemental Experimental Procedures for details). (B) Schematic diagram of the molecular and physiological data collection and integrative analysis. Can Burning the Midnight Oil Lead to Diabetes? Action Points If you tend to be a night owl, add that to the list of risk factors for developing diabetes.Note that significant gender differences were also found such that men who were evening type were at greater risk for diabetes, but women who were evening type had a significantly higher risk of metabolic syndrome only. 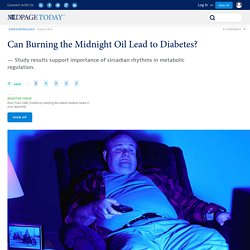 If you tend to be a night owl, add that to the list of risk factors for developing diabetes, according to a study from Korea. Korean adults (ages 47 to 59) with an evening chronotype, or people who have a circadian preference for going to bed late, were more likely to have diabetes (odds ratio 1.73, 95% CI 1.01-2.95), metabolic syndrome (OR 1.74 95% CI 1.05-2.87), and sarcopenia (OR 3.16 95% CI 1.36-7.33) than those with a morning chronotype, reported Nan Hee Kim, MD, PhD, of the Korea University College of Medicine, and colleagues. There also were gender differences for the associations, they wrote in the Journal of Clinical Endocrinology and Metabolism. Sleep schedule off? Stop eating junk, eat more protein. A lack of sleep not only creates a weaker immune system and a decrease in productivity, but it also leads to bad eating habits. 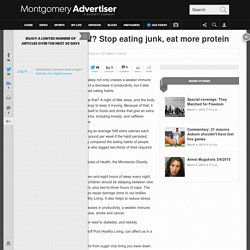 Ever notice that? A night of little sleep, and the body needs energy to keep it moving. Because of that, it attaches itself to foods and drinks that give an extra boost — items that are high in unhealthy carbs, including breads, and caffeine-infused drinks, such as sodas and sweet tea. People who are sleep-deprived end up eating an average 549 extra calories each day, which could lead to the gaining of one pound per week if the habit persisted, according to a Mayo Clinic study. The study compared the eating habits of people who slept as much as they needed, to those who logged two-thirds of their required rest time for eight days. The study was funded by the National Institutes of Health, the Minnesota Obesity Center and the Mayo Clinic. Small Study Links Lack of Sleep to Type 2 Diabetes Risk. THURSDAY, Feb. 19, 2015 (HealthDay News) -- A new study helps explain why getting too little sleep might boost diabetes risk. 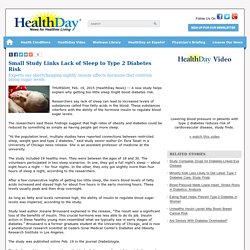 Researchers say lack of sleep can lead to increased levels of substances called free fatty acids in the blood. These substances interfere with the ability of the hormone insulin to regulate blood sugar levels. The researchers said these findings suggest that high rates of obesity and diabetes could be reduced by something as simple as having people get more sleep. "At the population level, multiple studies have reported connections between restricted sleep, weight gain and type 2 diabetes," said study senior author Dr. Esra Tasali in a University of Chicago news release. The study included 19 healthy men. After a few consecutive nights of getting too little sleep, the men's blood levels of fatty acids increased and stayed high for about five hours in the early morning hours.

The study was published online Feb. 19 in the journal Diabetologia. Hypnotics' association with mortality or cancer: a matched cohort study. Abstract Objectives An estimated 6%–10% of US adults took a hypnotic drug for poor sleep in 2010. 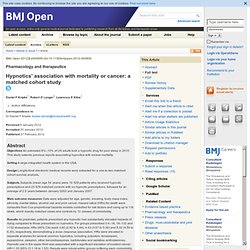 This study extends previous reports associating hypnotics with excess mortality. Setting A large integrated health system in the USA. Design Longitudinal electronic medical records were extracted for a one-to-two matched cohort survival analysis. Subjects Subjects (mean age 54 years) were 10 529 patients who received hypnotic prescriptions and 23 676 matched controls with no hypnotic prescriptions, followed for an average of 2.5 years between January 2002 and January 2007. Sleeping Pills Linked with Early Death. There’s a lot to keep you up at night — including this: new research suggests that the sleeping pills that many Americans use to help them rest may increase the risk of early death. 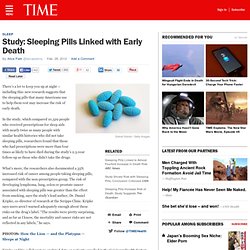 In the study, which compared 10,529 people who received prescriptions for sleep aids with nearly twice as many people with similar health histories who did not take sleeping pills, researchers found that those who had prescriptions were more than four times as likely to have died during the study’s 2.5-year follow-up as those who didn’t take the drugs. What’s more, the researchers also documented a 35% increased risk of cancer among people taking sleeping pills, compared with the non-prescription group.