The ability to control dreams may help us unravel the mystery of consciousness. We spend around six years of our lives dreaming – that’s 2,190 days or 52,560 hours. 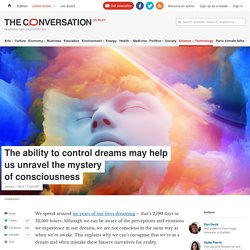 Although we can be aware of the perceptions and emotions we experience in our dreams, we are not conscious in the same way as when we’re awake. This explains why we can’t recognise that we’re in a dream and often mistake these bizarre narratives for reality. But some people – lucid dreamers – have the ability to experience awareness during their dreams by “re-awakening” some aspects of their waking consciousness.

They can even take control and act with intention in the dream world (think Leonardo DiCaprio in the film Inception). Lucid dreaming is still an understudied subject, but recent advances suggest it’s a hybrid state of waking consciousness and sleep. Brain activity in sleep may impact emotional disturbances in children with ADHD. Sleep consolidates emotional memories in healthy children but not in children with attention-deficit hyperactivity disorder (ADHD), according to research published May 29 in the open access journal PLOS ONE by Alexander Prehn-Kristensen and colleagues from University Hospital Schleswig-Holstein. 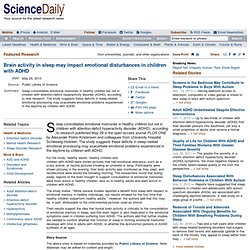 The study suggests these deficits in sleep-related emotional processing may exacerbate emotional problems experienced in the daytime by children with ADHD. For the study, healthy adults, healthy children and children with ADHD were shown pictures that had emotional relevance, such as a scary animal, or neutral pictures showing an umbrella or lamp. Participants were shown pictures in the evening, their brain activity was monitored as they slept, and recollections were tested the following morning. Learn that tune while fast asleep: Stimulation during sleep can enhance skill learning.

Want to nail that tune that you've practiced and practiced? 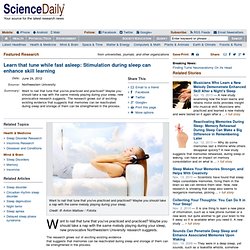 Maybe you should take a nap with the same melody playing during your sleep, new provocative Northwestern University research suggests. The research grows out of exciting existing evidence that suggests that memories can be reactivated during sleep and storage of them can be strengthened in the process. In the Northwestern study, research participants learned how to play two artificially generated musical tunes with well-timed key presses. Then while the participants took a 90-minute nap, the researchers presented one of the tunes that had been practiced, but not the other. "Our results extend prior research by showing that external stimulation during sleep can influence a complex skill," said Ken A. Sleep deprivation eliminates fear generalization: New way to treat PTSD? We commonly think of sleep as a healing process that melts away the stresses of the day, preparing us to deal with new challenges. 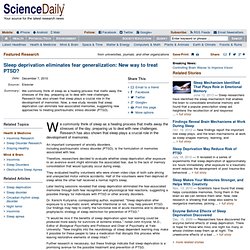 Research has also shown that sleep plays a crucial role in the development of memories. An important component of anxiety disorders, including posttraumatic stress disorder (PTSD), is the formulation of memories associated with fear. Sleep makes your memories stronger, and helps with creativity. As humans, we spend about a third of our lives asleep. 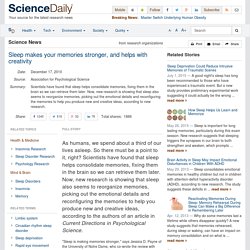 So there must be a point to it, right? Sleep May Be Important In Regulating Emotional Responses. According to a research abstract that will be presented on June11, at Sleep 2009, the 23rd Annual Meeting of the Associated Professional Sleep Societies, sleep selectively preservers memories that are emotionally salient and relevant to future goals when sleep follows soon after learning. 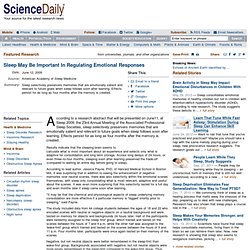 Effects persist for as long as four months after the memory is created. Results indicate that the sleeping brain seems to calculate what is most important about an experience and selects only what is adaptive for consolidation and long term storage. Across long delays of 24 hours, or even three–to-four months, sleeping soon after learning preserved the trade-off (compared to waiting an entire day before going to sleep). "It may be that the chemical and physiological aspects of sleep underlying memory consolidation are more effective if a particular memory is 'tagged' shortly prior to sleeping," said Payne.

If you don't snooze, do you lose? Wake-sleep patterns affect brain synapses during adolescence. An ongoing lack of sleep during adolescence could lead to more than dragging, foggy teens, a University of Wisconsin-Madison study suggests. 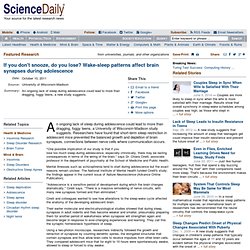 Researchers have found that short-term sleep restriction in adolescent mice prevented the balanced growth and depletion of brain synapses, connections between nerve cells where communication occurs. "One possible implication of our study is that if you lose too much sleep during adolescence, especially chronically, there may be lasting consequences in terms of the wiring of the brain," says Dr. Chiara Cirelli, associate professor in the department of psychiatry at the School of Medicine and Public Health. Mental illnesses such as schizophrenia tend to start during adolescence but the exact reasons remain unclear. The National Institute of Mental Health funded Cirelli's study; the findings appear in the current issue of Nature Neuroscience (Advance Online Publication). The experiments are under way, but Cirelli can't predict the outcome. Connections in children's brains strengthen during sleep. Nov. 20, 2013 — While young children sleep, connections between the left and the right hemispheres of their brain strengthen, which may help brain functions mature, according to a new study by the University of Colorado Boulder. 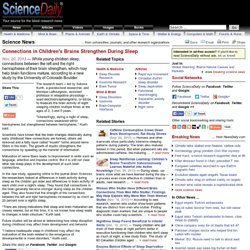 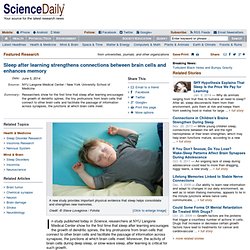 Moreover, the activity of brain cells during deep sleep, or slow-wave sleep, after learning is critical for such growth. The findings, in mice, provide important physical evidence in support of the hypothesis that sleep helps consolidate and strengthen new memories, and show for the first time how learning and sleep cause physical changes in the motor cortex, a brain region responsible for voluntary movements.

"We've known for a long time that sleep plays an important role in learning and memory. To shed light on this process, Dr. Gan and colleagues employed mice genetically engineered to express a fluorescent protein in neurons. Sleep. People spend much of their lives asleep. 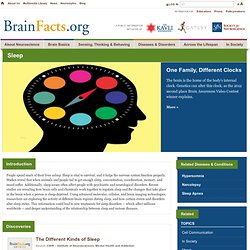 Sleep is vital to survival, and it helps the nervous system function properly. Goodnight-sleep-clean. Photo SLEEP seems like a perfectly fine waste of time. Why would our bodies evolve to spend close to one-third of our lives completely out of it, when we could instead be doing something useful or exciting? Something that would, as an added bonus, be less likely to get us killed back when we were sleeping on the savanna?

“Sleep is such a dangerous thing to do, when you’re out in the wild,” Maiken Nedergaard, a Danish biologist who has been leading research into sleep function at the University of Rochester’s medical school, told me. “It has to have a basic evolutional function. We’ve known for some time that sleep is essential for forming and consolidating memories and that it plays a central role in the formation of new neuronal connections and the pruning of old ones. In a series of new studies, published this fall in the journal Science, the Nedergaard lab may at last be shedding light on just what it is that would be important enough. “Think about a fish tank,” says Dr.

Sleep apnea, evolution, and breathing masks: an excerpt from David K. Randall’s Dreamland. Courtesy Jupiter Images/Pixland. The following article is adapted from David K. Randall’s Dreamland: Adventures in the Strange Science of Sleep, out now from W.W. Norton. The Brain May Disassemble Itself in Sleep. Compared with the hustle and bustle of waking life, sleep looks dull and unworkmanlike. Except for in its dreams, a sleeping brain doesn’t misbehave or find a job. It also doesn’t love, scheme, aspire or really do much we would be proud to take credit for.

Yet during those quiet hours when our mind is on hold, our brain does the essential labor at the heart of all creative acts. It edits itself. And it may throw out a lot. Sleep after learning strengthens connections between brain cells and enhances memory.