Circadian Rhythm, Melatonin & Sleep-Wake Cycles. A feel-good brain chemical called dopamine has been linked to everything from laziness and creativity to impulsivity and a tendency to partake in one-night stands. 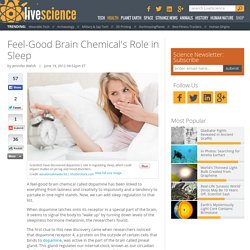 Now, we can add sleep regulation to that list. When dopamine latches onto its receptor in a special part of the brain, it seems to signal the body to "wake up" by turning down levels of the sleepiness hormone melatonin, the researchers found. The first clue to this new discovery came when researchers noticed that dopamine receptor 4, a protein on the outside of certain cells that binds to dopamine, was active in the part of the brain called pineal gland. 5 Things You Must Know About Sleep. You're tired. 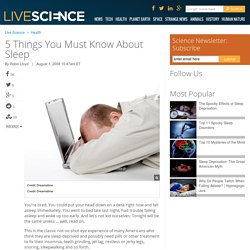 You could put your head down on a desk right now and fall asleep immediately. You went to bed late last night, had trouble falling asleep and woke up too early. And let's not kid ourselves: Tonight will be the same unless … well, read on. This is the classic not-so-shut-eye experience of many Americans who think they are sleep-deprived and possibly need pills or other treatment to fix their insomnia, teeth grinding, jet lag, restless or jerky legs, snoring, sleepwalking and so forth. Older Adults Need Less Sleep. How much sleep we need is largely a mystery, and sleep seems tougher to come by as we age. 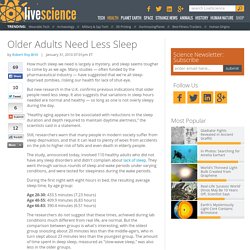 Many studies — often funded by the pharmaceutical industry — have suggested that we're all sleep-deprived zombies, risking our health for lack of shut-eye. But new research in the U.K. confirms previous indications that older people need less sleep. Strange Sleep Disorder Makes People See 'Demons' When filmmaker Carla MacKinnon started waking up several times a week unable to move, with the sense that a disturbing presence was in the room with her, she didn't call up her local ghost hunter. 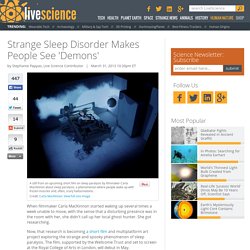 She got researching. Now, that research is becoming a short film and multiplatform art project exploring the strange and spooky phenomenon of sleep paralysis. The film, supported by the Wellcome Trust and set to screen at the Royal College of Arts in London, will debut in May. 5 Things You Must Know About Sleep. Robin Lloyd | April 01, 2009 11:46am ET Credit: © Ron Chapple Studios | Dreamstime.com You're tired. 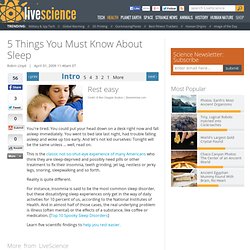 You could put your head down on a desk right now and fall asleep immediately. You went to bed late last night, had trouble falling asleep and woke up too early. And let's not kid ourselves: Tonight will be the same unless ... well, read on. Lost Sleep Can't Be Made Up, Study Suggests. If you think staying in bed on the weekends will make up for a weeks' worth of sleep deprivation, think again. 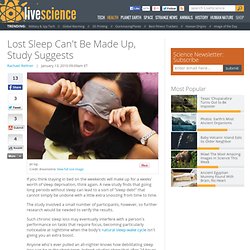 A new study finds that going long periods without sleep can lead to a sort of "sleep debt" that cannot simply be undone with a little extra snoozing from time to time. The study involved a small number of participants, however, so further research would be needed to verify the results. Such chronic sleep loss may eventually interfere with a person's performance on tasks that require focus, becoming particularly noticeable at nighttime when the body's natural sleep-wake cycle isn't giving you an extra boost. Anyone who's ever pulled an all-nighter knows how debilitating sleep loss can be in the short term. Putting the ‘Z’ in Zzzzzzz. This Behind the Scenes article was provided to LiveScience in partnership with the National Science Foundation. 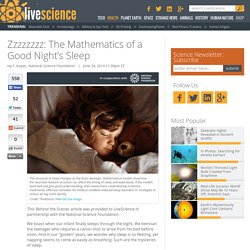 We boast when our infant finally sleeps through the night. We bemoan the teenager who requires a canon shot to arise from his bed before noon. And in our “golden” years, we wonder why sleep is so fleeting, yet napping seems to come as easily as breathing. Such are the mysteries of sleep. Troubled Sleep. A Better Diet Could Mean a Better Night's Sleep. I'm not sure exactly when it happened, but the U.S. seems to have become a nation obsessed with pills. 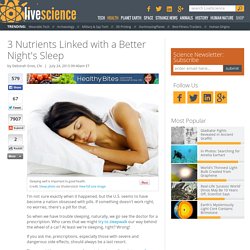 If something doesn't work right, no worries, there's a pill for that. So when we have trouble sleeping, naturally, we go see the doctor for a prescription.