Napping can Dramatically Increase Learning, Memory, Awareness, and More. In some places, towns essentially shut down in the afternoon while everyone goes home for a siesta. 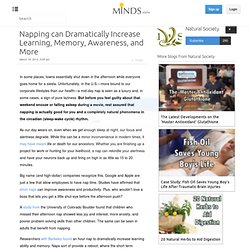 Unfortunately, in the U.S. —more bound to our corporate lifestyles than our health—a mid-day nap is seen as a luxury and, in some cases, a sign of pure laziness. But before you feel guilty about that weekend snooze or falling asleep during a movie, rest assured that napping is actually good for you and a completely natural phenomena in the circadian (sleep-wake cycle) rhythm.

As our day wears on, even when we get enough sleep at night, our focus and alertness degrade. While this can be a minor inconvenience in modern times, it may have meant life or death for our ancestors. Big name (and high-dollar) companies recognize this. A study from the University of Colorado Boulder found that children who missed their afternoon nap showed less joy and interest, more anxiety, and poorer problem solving skills than other children. Read: Sleep Removes Toxic Waste from the Brain. Night work 'throws body into chaos' 21 January 2014Last updated at 08:09 ET By James Gallagher Health and science reporter, BBC News Overnight maintenance on the London Underground Doing the night shift throws the body "into chaos" and could cause long-term damage, warn researchers. 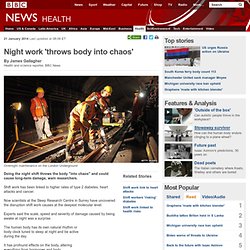 Shift work has been linked to higher rates of type 2 diabetes, heart attacks and cancer. Now scientists at the Sleep Research Centre in Surrey have uncovered the disruption shift work causes at the deepest molecular level. Experts said the scale, speed and severity of damage caused by being awake at night was a surprise. The human body has its own natural rhythm or body clock tuned to sleep at night and be active during the day. It has profound effects on the body, altering everything from hormones and body temperature to athletic ability, mood and brain function.

The study, published in Proceedings of the National Academy of Sciences, followed 22 people as their body was shifted from a normal pattern to that of a night-shift worker. “Start Quote. Night Light Color May Affect Your Mood, Suggests Study. A new animal study reported in the Journal of Neuroscience suggests that nocturnal light exposure may induce depressive responses and alter neuronal structure. 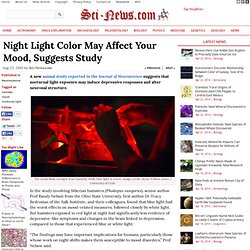 The study finds red light least harmful, while blue light is worst. Image credit: Bryan William Jones / University of Utah. In the study involving Siberian hamsters (Phodopus sungorus), senior author Prof Randy Nelson from the Ohio State University, first author Dr Tracy Bedrosian of the Salk Institute, and their colleagues, found that blue light had the worst effects on mood-related measures, followed closely by white light. But hamsters exposed to red light at night had significantly less evidence of depressive-like symptoms and changes in the brain linked to depression, compared to those that experienced blue or white light. “The findings may have important implications for humans, particularly those whose work on night shifts makes them susceptible to mood disorders,” Prof Nelson said. Bibliographic information: Tracy A. 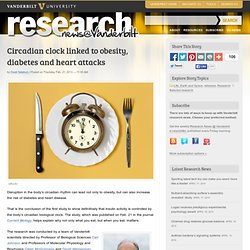 That is the conclusion of the first study to show definitively that insulin activity is controlled by the body’s circadian biological clock. The study, which was published on Feb. 21 in the journal Current Biology, helps explain why not only what you eat, but when you eat, matters. Carl Johnson (John Russell / Vanderbilt University) The research was conducted by a team of Vanderbilt scientists directed by Professor of Biological Sciences Carl Johnson and Professors of Molecular Physiology and Biophysics Owen McGuinness and David Wasserman. Because they are nocturnal, mice have a circadian rhythm that is the mirror image of that of humans: They are active during the night and sleep during the day. Owen McGuinness (Joe Howell / Vanderbilt University)