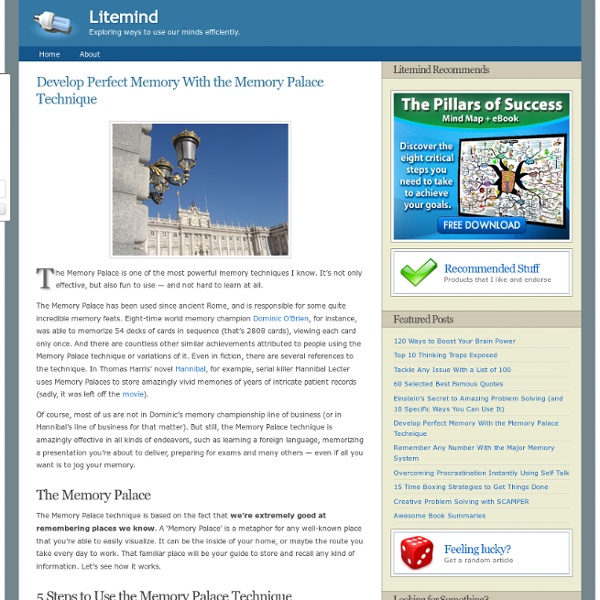 The Memory Palace is one of the most powerful memory techniques I know. It’s not only effective, but also fun to use — and not hard to learn at all. The Memory Palace has been used since ancient Rome, and is responsible for some quite incredible memory feats. Eight-time world memory champion Dominic O’Brien, for instance, was able to memorize 54 decks of cards in sequence (that’s 2808 cards), viewing each card only once. And there are countless other similar achievements attributed to people using the Memory Palace technique or variations of it. Even in fiction, there are several references to the technique. Of course, most of us are not in Dominic’s memory championship line of business (or in Hannibal’s line of business for that matter). The Memory Palace The Memory Palace technique is based on the fact that we’re extremely good at remembering places we know. 5 Steps to Use the Memory Palace Technique 1. First and foremost, you’ll need to pick a place that you’re very familiar with. 2.

Improve Your Memory by Speaking Your Mind’s Language By learning the language your mind uses, you’ll be able to tap into your mind’s full potential and develop a remarkable memory. It’s easier than you think – and you’ll actually have fun doing it. Your Mind Thinks in Pictures How to Build a Memory Palace (with Sample) <img alt="Image titled Build a Memory Palace Step 1" src=" width="728" height="546" class="whcdn">1Edit step1Decide on a blueprint for your palace. While a memory palace can be a purely imagined place, it is easier to base it upon a place that exists in the real world and that you are familiar with or you can use some places of your favorite video game. A basic palace could be your bedroom, for example. Larger memory palaces can be based on your house, a cathedral, a walk to the corner store, or your town.

The Complete Guide to Not Giving a Fuck Ok, I have a confession to make. I have spent almost my whole life– 31 years– Â caring far too much aboutÂ offending people, worrying if I’m cool enough for them, or asking myself if they are judging me. I can’t take it anymore. It’s stupid, and it’s not good for my well being.Â It has made me a punching bag– Â a flighty, nervous wuss. tips for your characters My husband has all sorts of unique skills, including lock picking. When my main character needed to escape from a tricky place, I turned to my better half to teach me how to get her out. There are all kinds of ways to pick a lock, but today I'll focus on how to do it with bobby pins, a lock pick set, and a bump key. If a pesky lock is in your character's way, here are some tricks she can try:

Pimp Your Memory: How to Build a Mind Palace like Sherlock Holmes You’ve all seen that scene in the Baskerville episode of BBC’s Sherlock (if you haven’t, you’re missing out, mate) where the show is about to reach its climax and Sherlock, in that flat, bitchy tone we’ve all come to love, commands: “Get out. I need to go to my Mind Palace.” John Watson explains it’s a memory technique which, in theory, means you’ll never forget a thing, and then we see Sherlock (with the aid of a visual manifestation of his mind, including a particularly funny moment when Elvis Presley’s face is superimposed on his) link together all the clues they’ve been given to solve the mystery of HOUND. Despite what a lot of viewers thought, the Mind Palace was not just a clever plot device invented by Mark Gatiss just for the show. And I’ve found it to be a ridiculously helpful mind hack. It’s helped me remember shopping lists, lists of films I’ve been recommended, has helped me memorise lines for plays (yes, even Shakespeare.

10 Things you didn't know about sound Shh! Make your life sound better Julian Treasure: Sounds we hear have an important effect on our lives and healthNoise can cause physical harm and sound can heal, he saysHe says headphone abuse is creating deaf kidsMore research needed to fully understand how what we hear affects our health, he says Adele - Someone Like You - Free Sheet Music Riff Adele builds a beautiful and moving song over the simplest of chord patterns. First take a simple argeggio figure on A major, then move the lower most note of the pattern down one step to G# Then continue, down one step to G# then again to F#, ending finally on a D major chord: The chords that result are actually: A, C#m, F#m7, D

Harsh's Worksheet (WIP) - /fit/ Wiki Introduction "Oh god 50000 words I just want abs I didn't want to major in literature where are the Cliffs" shut up, this IS the cliffs. Read it. If you only want to look at a specific section, display the Content right above this part, otherwise, proceed from top to bottom, just like your dad did when he beat you up for eating all of the candy you worthless little