To make memories, new neurons must erase older ones 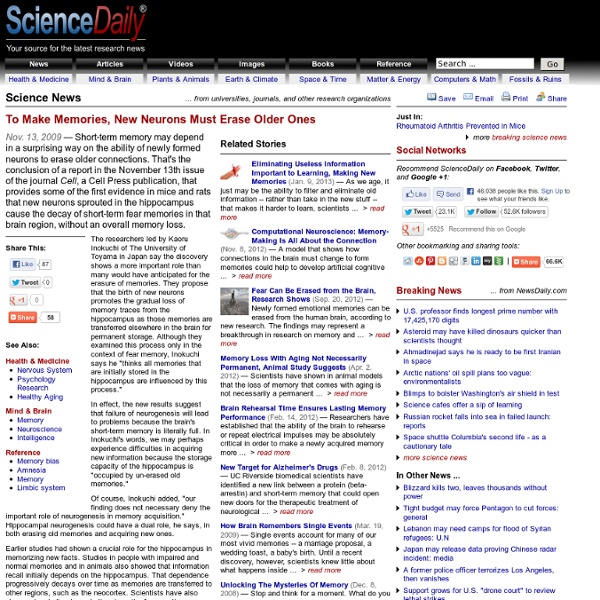 Short-term memory may depend in a surprising way on the ability of newly formed neurons to erase older connections. That's the conclusion of a report in the November 13th issue of the journal Cell, a Cell Press publication, that provides some of the first evidence in mice and rats that new neurons sprouted in the hippocampus cause the decay of short-term fear memories in that brain region, without an overall memory loss. The researchers led by Kaoru Inokuchi of The University of Toyama in Japan say the discovery shows a more important role than many would have anticipated for the erasure of memories. They propose that the birth of new neurons promotes the gradual loss of memory traces from the hippocampus as those memories are transferred elsewhere in the brain for permanent storage. Although they examined this process only in the context of fear memory, Inokuchi says he "thinks all memories that are initially stored in the hippocampus are influenced by this process."

Neuroscience Neuroscience is the scientific study of the nervous system.[1] Traditionally, neuroscience has been seen as a branch of biology. However, it is currently an interdisciplinary science that collaborates with other fields such as chemistry, computer science, engineering, linguistics, mathematics, medicine and allied disciplines, philosophy, physics, and psychology. It also exerts influence on other fields, such as neuroeducation[2] and neurolaw. Because of the increasing number of scientists who study the nervous system, several prominent neuroscience organizations have been formed to provide a forum to all neuroscientists and educators. History[edit] The study of the nervous system dates back to ancient Egypt. Early views on the function of the brain regarded it to be a "cranial stuffing" of sorts. The view that the heart was the source of consciousness was not challenged until the time of the Greek physician Hippocrates. Modern neuroscience[edit] Human nervous system

The Cloud and Collaboration Paper written as a contribution to the Ars Electronica symposium on Cloud Intelligence. Let's take as a starting point the discussion of 'cloud intelligence' on the conference website: In the cloud of connections, we each become social neurons, mimicking the biological human brain but on a giant scale. This idea of the connected world as a global brain is not new, nor surprising. Peter Russell's The Global Brain explicitly makes the connection. We have already noted that there are, very approximately, the same number of nerve cells in a human brain as there are human minds on the planet. According to Russell, the brain develops in two phases. Tom Stonier writes, In principle, this process does not differ from the evolution of primitive nervous systems into advanced mammalian brains... each node, rather than being a neuron, is a person comprising trillions of neurons ... coupled ... to their personal computers... We think together but remain independent in our identity. 80+1. (2008).

#31: Autism: One Label, Many Diseases | Mental Health People with autism are regularly lumped together and treated as a single group. But the world’s largest genetic study of the condition “shows that autism is many different diseases,” says Stanley Nelson, a professor of genetics and psychiatry at UCLA who collaborated on the investigation. “That insight should greatly enlighten how we think about autism and attempt to treat it.” The study, conducted by a global consortium of 120 scientists, compared the genes of more than 1,000 autistic children with those of 1,300 youngsters unaffected by the disorder. As the researchers reported last July, the mutations associated with autism fall all over the map. “If 100 different kids with autism walked into a clinic,” Nelson says, “chances are they’d have 100 different genetic aberrations.” Most of those aberrations occur in genes that affect the development and functioning of the brain.

Brain innately separates living and non-living objects for proce For unknown reasons, the human brain distinctly separates the handling of images of living things from images of non-living things, processing each image type in a different area of the brain. For years, many scientists have assumed the brain segregated visual information in this manner to optimize processing the images themselves, but new research shows that even in people who have been blind since birth the brain still separates the concepts of living and non-living objects. The research, published in today's issue of Neuron, implies that the brain categorizes objects based on the different types of subsequent consideration they demand—such as whether an object is edible, or is a landmark on the way home, or is a predator to run from. They are not categorized entirely by their appearance. "When we looked at the MRI scans, it was pretty clear that blind people and sighted people were dividing up living and non-living processing in the same way," says Mahon. Story source

EUCLID | EdUcational Curriculum for the usage of LInked Data An Analog Artificial Neural Network as Art Phil Stearns has constructed a 45 “neuron” network of electronic parts which responds to lights and tones with a (rather cute) squealing sound. A picture of the components for this strange device: Each “neuron” consisted of analog electronics corresponding to each of 6 functions: Input, Summing, Threshold, “Offset,” “Output,” and “Structure” (not sure about those latter three). The connectivity was determined by hand. Phil states that the sculpture is not intelligent, but rather “some kind of squid baby.” Neural networks have great potential for contributing to the arts. Here’s some art from a portion of rat brain placed into a petri dish: And, of course, there’s Jonathan McCabe‘s fantastic network art: Jon McCabe’s process is perhaps the most interesting. It sounds like none of these networks were trained to produce good art – but they seem to have some “natural” talent regardless!