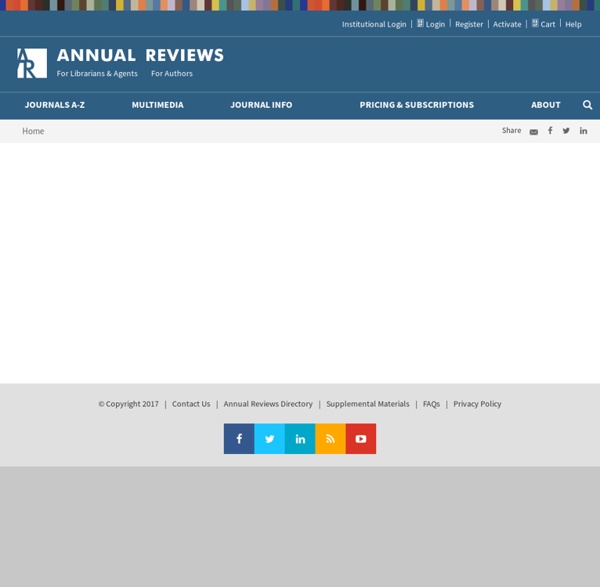 This site uses cookies to improve performance. If your browser does not accept cookies, you cannot view this site. Setting Your Browser to Accept Cookies There are many reasons why a cookie could not be set correctly. Below are the most common reasons: You have cookies disabled in your browser. Why Does this Site Require Cookies? This site uses cookies to improve performance by remembering that you are logged in when you go from page to page. What Gets Stored in a Cookie? This site stores nothing other than an automatically generated session ID in the cookie; no other information is captured. In general, only the information that you provide, or the choices you make while visiting a web site, can be stored in a cookie.

The role of the microbiome in cancer development and therapy Abstract Answer questions and earn CME/CNE The human body harbors enormous numbers of microbiota that influence cancer susceptibility, in part through their prodigious metabolic capacity and their profound influence on immune cell function. Microbial pathogens drive tumorigenesis in 15% to 20% of cancer cases. Even larger numbers of malignancies are associated with an altered composition of commensal microbiota (dysbiosis) based on microbiome studies using metagenomic sequencing.

Type IV collagen C4 domain - Wikipedia The collagen IV C4 domain contains 12 cysteines, and all of them are involved in disulphide bonds. It folds into a tertiary structure with predominantly beta-strands. The collagen IV C4 domain is composed of two similarly folded subdomains stabilised by 3 intrachain dissulphide bonds involving the following pairs: C1-C6, C2-C5, and C3-C4. Exercise for people with cancer: a clinical practice guideline R. Segal, MD*, C. Zwaal, MSc†, E. Glial fibrillary acidic protein - Wikipedia Glial fibrillary acidic protein (GFAP) is a protein that is encoded by the GFAP gene in humans.[5] Glial fibrillary acidic protein is an intermediate filament (IF) protein that is expressed by numerous cell types of the central nervous system (CNS) including astrocytes[6] and ependymal cells.[7] GFAP has also been found to be expressed in glomeruli and peritubular fibroblasts taken from rat kidneys[8] Leydig cells of the testis in both hamsters[9] and humans,[10] human keratinocytes,[11] human osteocytes and chondrocytes[12] and stellate cells of the pancreas and liver in rats.[13] First described in 1971,[14] GFAP is a type III IF protein that maps, in humans, to 17q21.[15] It is closely related to its non-epithelial family members, vimentin, desmin, and peripherin, which are all involved in the structure and function of the cell’s cytoskeleton. Structure[edit]

Cancer screening, prevention, and treatment in people with mental illness - Weinstein - 2015 - CA: A Cancer Journal for Clinicians Abstract Answer questions and earn CME/CNE People with mental illness die decades earlier in the United States compared with the general population. Most of this disparity is related to preventable and treatable chronic conditions, with many studies finding cancer as the second leading cause of death. Individual lifestyle factors, such as smoking or limited adherence to treatment, are often cited as highly significant issues in shaping risk among persons with mental illness. However, many contextual or systems-level factors exacerbate these individual factors and may fundamentally drive health disparities among people with mental illness.

NG2 proteoglycan - Wikipedia NG2, or neural/glial antigen 2, is a rat integral membrane proteoglycan found in the plasma membrane of many diverse cell types.[1] Homologous proteins in other species include human CSPG4, also known as melanoma-associated chondroitin sulfate proteoglycan (MCSP), Mouse AN2, and Sea urchin ECM3.[2] This single-pass transmembrane molecule may be plasma membrane-bound or secreted and associated with the extracellular matrix.[3] It is believed to play a role in functions such as cell adhesion, cell-cell and cell-ECM communication, migration and metastasis, proliferation, and axonal growth, guidance and regeneration. NG2-positive cells include oligodendrocyte progenitor cells (OPCs) and other progenitor cell populations, such as chondroblasts, myoblasts, and pericytes, as well as several different tumors including glioblastoma multiforme and melanoma.[4][5][6][7][8][9][10] Structure[edit] NG2 cDNA contains 8,071 nucleotides corresponding to 2,325 amino acids. Localization[edit]

Guidelines for perioperative care after radical cystectomy for bladder cancer: Enhanced Recovery After Surgery (ERAS®) society recommendations 8.Epidural analgesia (EDA) 9.Minimally invasive approach Minimally invasive pelvic surgery has been shown to decrease the inflammatory response when compared to the open approach. Laparoscopic rectal surgery seems to reduce the risk of postoperative ileus, complications and length of stay. However, long term oncological results are awaited before any higher LE statement can be drawn.

Mesenchyme - Wikipedia Mesenchyme is a type of connective tissue found mostly during development of the embryo.[1] It is composed mainly of ground substance with few cells or fibers. It can also be referred to as a group of mucoproteins found in certain types of cysts (etc.), resembling mucus. It is most easily found as a component of Wharton's jelly. The vitreous of the eyeball is a similar tissue.[2] NCCN Task Force Report: Bone Health in Cancer Care Assessing Bone Health Osteoporosis and its associated increase in fracture risk is a major health issue for the aging population, and especially for patients with cancer. Hip and vertebral fractures are associated with chronic pain, decreased quality of life, and increased risk of death.1 Much of the morbidity and mortality associated with bone loss can be prevented with appropriate screening, lifestyle interventions, and therapy.

ASCL1 - Wikipedia Achaete-scute homolog 1 is a protein that in humans is encoded by the ASCL1 gene.[3][4] Because it was discovered subsequent to studies on its homolog in Drosophila, the Achaete-scute complex, it was originally named MASH-1 for mammalian achaete scute homolog-1.[5] Function[edit] This gene encodes a member of the basic helix-loop-helix (BHLH) family of transcription factors.