Memory Memory, is that True?

The Rashomon Effect: The Phenomenon, Named After Akira Kurosawa's Classic Film, Where Each of Us Remembers the Same Event Differently. Toward the end of The Simpsons’ golden age, one episode sent the titular family off to Japan, not without resistance from its famously lazy patriarch. 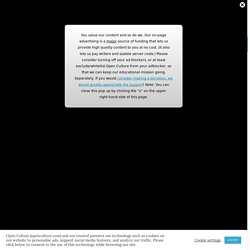 “Come on, Homer,” Marge insists, “Japan will be fun! It Doesn't Take Long to Believe Your Own Lies. In addition, the EEG data revealed that lying engaged the brain processes responsible for working memory. 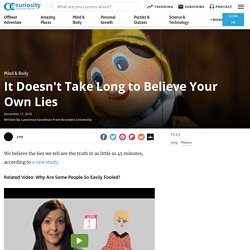 According to Paige, this finding suggests a lie can embed itself in memory and come to feel as real as the truth. "Lying alters memory," she says. "It creates a new memory for something that didn't happen. " The research appears in the journal Brain and Cognition. Source: Brandeis University This article is republished from Futurity under a Creative Commons license. Ray Spencer's Kids Falsely Accused Him of Sexual Abuse.

Krause and Davidson denied any wrongdoing in the investigation.

But after two and a half days of deliberation, the jury decided that the defendants had conspired to violate Ray's rights, delivering a verdict of $9 million. Seven months later, the trial judge overturned the verdict for a narrow reason related to the jury instructions. The family waited. Nearly three years went by as the decision was appealed.

Memory: The Weirdest Ever Fact is Actually True, Study Reveals. New memory discovery seems depressing but when you think about it is actually critical to useful recall. 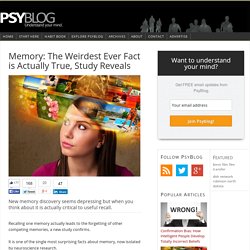 Recalling one memory actually leads to the forgetting of other competing memories, a new study confirms. It is one of the single most surprising facts about memory, now isolated by neuroscience research. Although many scientists believed the brain must work this way, this is the first time it has been demonstrated. Dr Maria Wimber, a cognitive neuroscientist and the study’s first author, said: “Though there has been an emerging belief within the academic field that the brain has this inhibitory mechanism, I think a lot of people are surprised to hear that recalling memories has this darker side of making us forget others by actually suppressing them.” The study monitored people’s brain activity while they tried to recall images they had been shown earlier. By measuring activity in tiny sections of the brain, the neuroscientists were able to track individual memories. Serial: your memory can play tricks on you – here’s how.

Six weeks ago I arrived back in London after my first trip to Australia. 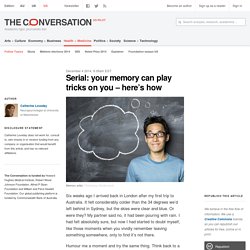 It felt considerably colder than the 34 degrees we’d left behind in Sydney, but the skies were clear and blue. Or were they? My partner said no, it had been pouring with rain. Eyewitnesses and emotion: A reminder to engage critical thinking - JREF. New Insights Into Eyewitness Memory From Groundbreaking Replication Initiative. News An innovative research replication initiative has generated results that have important implications for eyewitness memory. 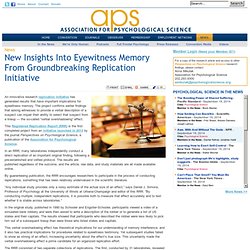 The project confirms earlier findings that asking witnesses to provide a verbal description of a suspect can impair their ability to select that suspect from a lineup — the so-called “verbal overshadowing” effect. This Registered Replication Report (RRR) is the first completed project from an initiative launched in 2013 by the journal Perspectives on Psychological Science, a publication of the Association for Psychological Science.

In an RRR, many laboratories independently conduct a direct replication of an important original finding, following a pre-established and vetted protocol. The results are published regardless of the outcome, and the article, raw data, and study materials are all made available online. “Any individual study provides only a noisy estimate of the actual size of an effect,” says Daniel J. Where do children’s earliest memories go? – Kristin Ohlson. I’m the youngest by far of five children. 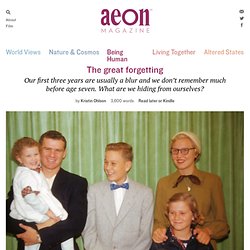 My mother was 34 when she conceived me in 1950, so chagrined by this chronological indiscretion that she tried to hide the pregnancy from her sister. My mortified oldest brother didn’t want to tell his high-school friends that a new baby was on the way, but it was a small town. Word spread. My mother’s age and my late arrival in the family felt burdensome to me too, especially when I started school in 1957 and met my classmates’ mothers. They were still having babies! Popular now How did Albert Einstein become the poster boy for genius? If death comes for everything, does it matter what we kill? Induced hallucination turns doctors into pizza chefs - health - 24 April 2014. A 22-year-old man has been instantaneously transported to his family's pizzeria and his local railway station – by having his brain zapped. 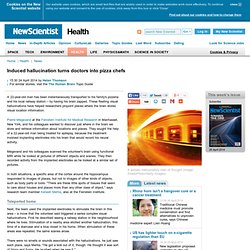 These fleeting visual hallucinations have helped researchers pinpoint places where the brain stores visual location information. Pierre Mégevand at the Feinstein Institute for Medical Research in Manhasset, New York, and his colleagues wanted to discover just where in the brain we store and retrieve information about locations and places. Scientists pinpoint age when childhood memories fade. Move over, Proust: New theory explains where old memories go. Think back to your first childhood beach vacation. 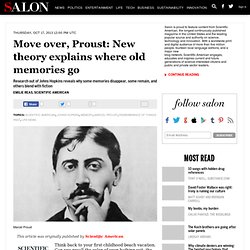 Can you recall the color of your bathing suit, the softness of the sand, or the excitement of your first swim in the ocean? Early memories such as this often arise as faded snapshots, remarkably distinct from newer memories that can feel as real as the present moment. With time, memories not only lose their rich vividness, but they can also become distorted, as our true experiences tango with a fictional past. Elizabeth Loftus interview: False-memory research on eyewitnesses, child abuse recovered memories. Hoang Xuan Pham From repressed memories to faulty eyewitness testimony, psychologist Elizabeth Loftus of the University of California–Irvine, has made her name working on false memory. 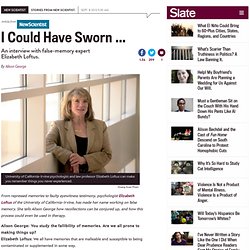 She tells Alison George how recollections can be conjured up, and how this process could even be used in therapy. Alison George: You study the fallibility of memories. Scientists implant false memories in mouse’s brain. Fans of the blockbuster film “Inception” will recall corporate conman Leo DiCaprio’s dream-bending antics where he infiltrated the subconscious of his targets with implanted memories. Mind control has long been the domain of Hollywood and science fiction, but new memory-implanting research on mice by Massachusetts Institute of Technology neuroscientists may be the first step in unlocking the mystery of false memory syndrome.

Using a technique called optogenetics, Nobel laureate and neuroscientist Susumu Tonegawa and a team of MIT researchers manipulated individual cells in the mouse hippocampus, the part of the brain responsible for memory formation, to make them responsive to light. In the experiment, several mice were placed in a chamber glowing with reddish light and allowed to explore.

The next day, they were placed in a second chamber and given electric shocks on their feet to encode a fear response. He said powerful false memories in humans may be created in a similar way.