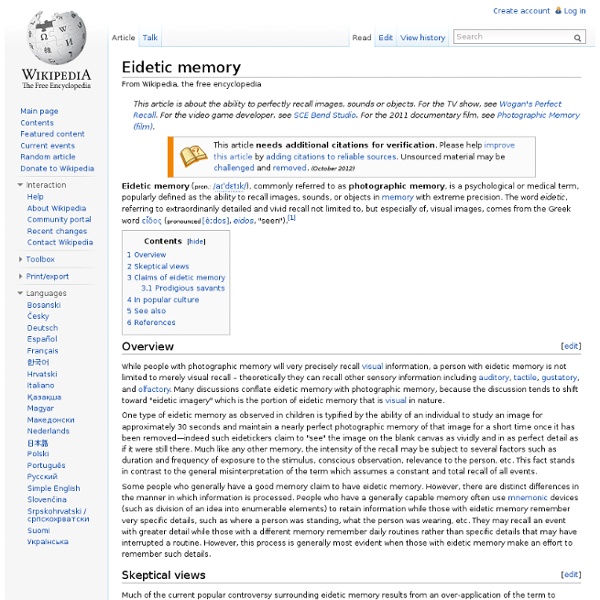 Overview[edit] The ability to recall images in great detail for several minutes is found in early childhood (between 2% and 10% of that age group) and is unconnected with the person's intelligence level.[citation needed] Like other memories, they are often subject to unintended alterations. The ability usually begins to fade after the age of six years, perhaps as growing vocal skills alter the memory process.[2][3] A few adults have had phenomenal memories (not necessarily of images), but their abilities are also unconnected with their intelligence levels and tend to be highly specialized. Persons identified as having a related condition known as Highly Superior Autobiographical Memory (HSAM)[1] are able to remember very intricate details of their own personal life, but this ability seems not to extend to other, non-autobiographical information. Skeptical views[edit] Notable claims[edit] Prodigious savants[edit] See also[edit] References[edit]

Neuroscience, free will and determinism: 'I'm just a machine' What does this mean in terms of free will? "We don't have free will, in the spiritual sense. What you're seeing is the last output stage of a machine. There are lots of things that happen before this stage – plans, goals, learning – and those are the reasons we do more interesting things than just waggle fingers. The conclusions are shocking: if we are part of the universe, and obey its laws, it's hard to see where free will comes into it. "If you see a light go green, it may mean press the accelerator; but there are lots of situations where it doesn't mean that: if the car in front hasn't moved, for example. Slowly, however, we are learning more about the details of that complexity. "What happens if someone commits a crime, and it turns out that there's a lesion in that brain area? This runs shockingly contrary to the sense of freedom that we feel in terms of controlling our actions, on which we base our whole sense of self and system of morality. Prof Haggard is dismissive.

Neuroscientists reveal magicians' secrets - Technology & science - Science - LiveScience NEW YORK — There is a place for magic in science. Five years ago, on a trip to Las Vegas, neuroscientists Stephen Macknik and Susana Martinez-Conde realized that a partnership was in order with a profession that has an older and more intuitive understanding of how the human brain works. Magicians, it seems, have an advantage over neuroscientists. "Scientists have only studied cognitive illusions for a few decades. She and Macknik, her husband, use illusions as a tool to study how the brain works. After their epiphany in Las Vegas, where they were preparing for a conference on consciousness, the duo, who both direct laboratories at the Barrow Neurological Institute in Arizona, teamed up with magicians to learn just how they harness the foibles of our brains. The psychological concepts behind illusions are generally better understood, but they treat the brain as something of a black box, without the insight into brain activity or anatomy that neuroscience can offer, they write.

Berkeley on Biphasic Sleep If you see a student dozing in the library or a co-worker catching 40 winks in her cubicle, don’t roll your eyes. New research from the University of California, Berkeley, shows that an hour’s nap can dramatically boost and restore your brain power. Indeed, the findings suggest that a biphasic sleep schedule not only refreshes the mind, but can make you smarter. Students who napped (green column) did markedly better in memorizing tests than their no-nap counterparts. Conversely, the more hours we spend awake, the more sluggish our minds become, according to the findings. “Sleep not only rights the wrong of prolonged wakefulness but, at a neurocognitive level, it moves you beyond where you were before you took a nap,” said Matthew Walker, an assistant professor of psychology at UC Berkeley and the lead investigator of these studies. In the recent UC Berkeley sleep study, 39 healthy young adults were divided into two groups — nap and no-nap.

The lost art of total recall | Science | The Observer A few middle-aged couples are chatting at a dinner party when one husband, Harry, starts talking enthusiastically about a new restaurant he has just visited with his wife. What's its name, demands a friend. Harry looks blank. It's a vintage joke but it makes a telling point, one that forms the core of a newly published book on memory, Moonwalking with Einstein: The Art and Science of Remembering Everything, by American journalist Joshua Foer. As Foer points out, we no longer need to remember telephone numbers. As a result, we no longer remember long poems or folk stories by heart, feats of memory that were once the cornerstones of most people's lives. Hence Foer's book, which is published by Penguin this month. The trick, Foer says, is to adopt a process known as "elaborative encoding", which involves converting information, such as a shopping list, into a series of "engrossing visual images". In this way, all sorts of feats become possible.

Mobile phone use increases brain activity, study suggests | Science Radio waves from mobile phones appear to boost activity in parts of the brain that are closest to the devices' antennas, according to US government scientists. Researchers found that a 50-minute call led to a localised increase in brain activity of 7%, but they said there was no evidence to suggest the rise was harmful. To rule out the variation in brain activity that would be expected when someone listens to a call normally, changes in activity were monitored while the phone was taking a call but was muted. The team, led by Nora Volkow, director of the National Institute on Drug Abuse in Maryland, found that brain activity rose in line with the strength of the electromagnetic field to which the particular brain region was exposed. Mobile phones use radio waves to send and receive calls and these produce small electromagnetic fields that can be absorbed by the head and brain. In the new study, 47 volunteers were given two brain scans, each on different days.

Neuroplasticity Contrary to conventional thought as expressed in this diagram, brain functions are not confined to certain fixed locations. Neuroplasticity, also known as brain plasticity, is an umbrella term that encompasses both synaptic plasticity and non-synaptic plasticity—it refers to changes in neural pathways and synapses which are due to changes in behavior, environment and neural processes, as well as changes resulting from bodily injury.[1] Neuroplasticity has replaced the formerly-held position that the brain is a physiologically static organ, and explores how - and in which ways - the brain changes throughout life.[2] Neuroplasticity occurs on a variety of levels, ranging from cellular changes due to learning, to large-scale changes involved in cortical remapping in response to injury. The role of neuroplasticity is widely recognized in healthy development, learning, memory, and recovery from brain damage. Neurobiology[edit] Cortical maps[edit] Applications and example[edit] Vision[edit]

How To Boost Brain Power and Memory Until just a few years ago, doctors believed that the brain stopped making new neural connections - meaning that the memory began to get irreversibly worse - when the body stopped developing, usually in the early 20s. And doctors knew that, like any other part of the body, neurons weaken as people age. Loss of brain function due to neural breakdown was assumed to be a normal, unavoidable part of aging. In the past few years, it has become clear that you can, in fact, make new neurons starting in your 20s and continuing well into old age. There are lots of things you can do right now to preserve, protect and enhance your gray matter. 1Physical exercise A healthy body really does mean a healthy mind. Physical exercise may even help prevent Alzheimer's disease. 2Lifelong learning - your brain is a learning machine For most of us, after we graduate from high school or college, our pursuit of new knowledge bottoms out over time. How can you challenge yourself? 3Mental stimulation 5Sleep & Nap

Learn more quickly by transcranial magnetic brain stimulation Public release date: 28-Jan-2011 [ Print | E-mail Share ] [ Close Window ] Contact: Dr. Klaus Funkefunke@neurop.rub.de 49-023-432-23944Ruhr-University Bochum This release is available in German. What sounds like science fiction is actually possible: thanks to magnetic stimulation, the activity of certain brain nerve cells can be deliberately influenced. Magnetic pulses stimulate the brain Transcranial magnetic stimulation (TMS) is a relatively new method of pain-free stimulation of cerebral nerve cells. Repeated stimuli change cerebral activity Since the mid-1990's, repetitive TMS has been used to make purposeful changes to the activability of nerve cells in the human cortex: "In general, the activity of the cells drops as a result of a low-frequency stimulation, i.e. with one magnetic pulse per second. Contact points between cells are strengthened or weakened It is unknown to a great extent how precisely the activity of nerve cells is changed by repeated stimulation. Literature Prof.