The Science of "Chunking," Working Memory, and How Pattern Recognition Fuels Creativity 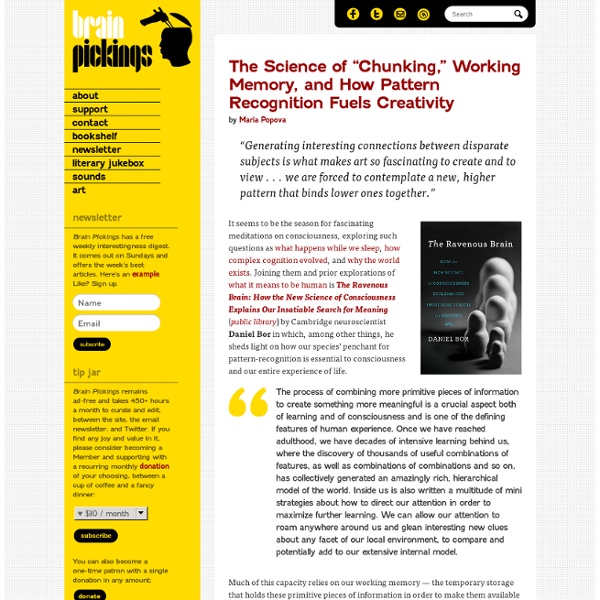 by Maria Popova “Generating interesting connections between disparate subjects is what makes art so fascinating to create and to view… We are forced to contemplate a new, higher pattern that binds lower ones together.” It seems to be the season for fascinating meditations on consciousness, exploring such questions as what happens while we sleep, how complex cognition evolved, and why the world exists. Joining them and prior explorations of what it means to be human is The Ravenous Brain: How the New Science of Consciousness Explains Our Insatiable Search for Meaning (public library) by Cambridge neuroscientist Daniel Bor in which, among other things, he sheds light on how our species’ penchant for pattern-recognition is essential to consciousness and our entire experience of life. To illustrate the power of chunking, Bor gives an astounding example of how one man was able to use this mental mechanism in greatly expanding the capacity of his working memory. Donating = Loving Share on Tumblr Related:  Serendipities • New Learning Skills

The Brain Needs Downs to Have Ups Four neurochemicals cause happiness : endorphins, dopamine , oxytocin and serotonin. Each evolved to do a different job. When you know what the job is, you know why your happy chemicals can't be on all the time. 1. 2. Happy chemicals evolved to alert us to survival-relevant information around us. Yet it's natural to desire more happy chemicals and to do everything possible to stimulate them.

Collection History The David Rumsey Map Collection was started over 25 years ago and contains more than 150,000 maps. The collection focuses on rare 18th and 19th century maps of North and South America, although it also has maps of the World, Asia, Africa, Europe, and Oceania. The collection includes atlases, wall maps, globes, school geographies, pocket maps, books of exploration, maritime charts, and a variety of cartographic materials including pocket, wall, children's, and manuscript maps. Items range in date from about 1700 to 1950s. Digitization of the collection began in 1996 and there are now over 55,000 items online, with new additions added regularly. Maps are uniquely suited to high-resolution scanning because of the large amount of detailed information they contain. With Luna Imaging's Insight® software, the maps are experienced in a revolutionary way. Materials created in America and that illustrate the evolution of the country's history, culture, and population distinguish the collection.

Buzzword: Micro-learning I was introduced recently to a new buzz word making its way across the learning & development industry: Micro-learning. If you’re like me, you’re probably starting to get a bit tired of people adding their particular spin to learning – all in search of the holy grail that is the “right way” to make learning happen. It doesn’t exist. But having got that out of the way, it is worth looking at these ideas to see if there’s anything we, as learning professionals, can learn from them. As a term, “micro-learning” has been around since about 2004, when it was put forward in a PhD thesis by Gerhard Gassler. Basically, micro-learning describes a method of learning, whereby concepts and ideas are presented (or retrieved) in very small chunks, over very short time-scales, often at the point of need, or at the point of maximum receptiveness. Examples include: As can be seen from the examples above, micro-learning is generally pulled rather than pushed. ie. the learner dictates when they learn.

Interviews - Clifford Nass | Digital Nation | FRONTLINE What is multitasking? Multitasking as we're studying it here involves looking at multiple media at the same time. So we're not talking about people watching the kids and cooking and stuff like that. We're talking about using information, multiple sources. And that is the part of everyone's life that's growing so rapidly, “We have not yet found something that [multitaskers] are definitely better at than people who don't multitask.” So is it that most people think it is possible to do two things at the same time? We know that there are a few things humans can do at the same [time], two things at the same time our brains can do, but not any of the things we think about as multitasking. ... The idea of autopilot is not really precise. So what's the big point here [behind your research]? The big point here is, you walk around the world, and you see people multitasking, working on tasks while watching TV, while talking with people. What are you putting them through here [in your lab]? ... ...

OATD – Open Access Theses and Dissertations Formula for success in learning If you have found this place in the vast cyberspace of the web, you are probably not the one to convince that knowledge is power, and that solutions to most problems facing humanity could be found if we were armed with more understanding of how the world works. While knowledge is power, information can be overpowering. An increasing proportion of the population suffers from Information Fatigue Syndrome, i.e. from stress related to being overwhelmed with an unmanageable glut of information. This text introduces you to simple steps toward managing information and toward rock-solid knowledge. No cheap miracles. Just a clear and straight approach based on facts and science. I have been working on the problem of effective learning for 16 years now since, as a student of molecular biology, I first understood how I could greatly change the quality of all my actions were I able to improve the recall of what I studied for exams (and not only). You may find the first three points obvious.

How to Ace Your Finals Without Studying I’ve never been that keen on studying before an exam. I rarely study for more than a half hour, even for big final exams worth more than half my grade. When I do study, I usually just skim over the material and do a few practice questions. Despite what some might point out as horrible studying habits, I’ve done very well for myself in school. It’s very easy to look at my successes and apparent lack of effort and quickly deem that it is an innate gift, impossible to replicate. Webs and Boxes The system I use for learning I’m going to call holistic learning. People who learn through compartments, try to organize their mind like a filing cabinet. Holistic learning takes an opposite approach. When it comes time for exams (or any practical application for your knowledge) compartmentalized learners have to hope that they pounded the information hard enough into their head so it might come up during the exam. Compartmentalized learning is an exercise in insanity. 1) Ask Questions 4) Feel It