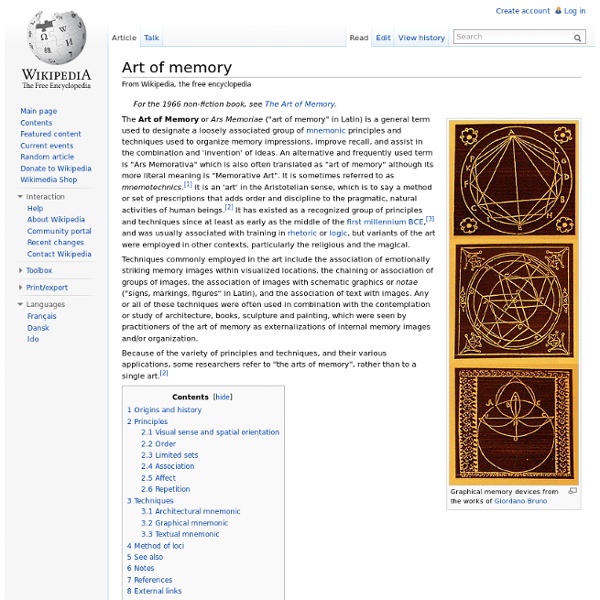 The art of memory (Latin: ars memoriae) is any of a number of a loosely associated mnemonic principles and techniques used to organize memory impressions, improve recall, and assist in the combination and 'invention' of ideas. An alternative and frequently used term is "Ars Memorativa" which is also often translated as "art of memory" although its more literal meaning is "Memorative Art". It is sometimes referred to as mnemotechnics.[1] It is an 'art' in the Aristotelian sense, which is to say a method or set of prescriptions that adds order and discipline to the pragmatic, natural activities of human beings.[2] It has existed as a recognized group of principles and techniques since at least as early as the middle of the first millennium BCE,[3] and was usually associated with training in rhetoric or logic, but variants of the art were employed in other contexts, particularly the religious and the magical. Origins and history[edit] One of Giordano Bruno's simpler pieces Principles[edit]

How to Learn Without Memorizing Photo by Edwin Stemp Rote memorization is an inefficient way to learn. Just retaining a single formula can mean pounding the same information into your skull dozens of times. If your computer hard drive had this accuracy, you’d probably throw it out. Unfortunately, you’re stuck with your brain. A few years ago, I noticed that smart people seemed to learn differently than most other people. While there are undoubtedly some genetic advantages that allow some people to learn effortlessly, I think part of this difference in success comes down to strategy. Is Your Brain a File Drawer or a Web of Ideas? A computer stores information as thousands of electrical 1s and 0s in a linear fashion. However, your brain isn’t a sequence of bits and bytes, so this approach doesn’t make sense. Other Forms of Learning What I’d like to advocate in this article is a more creative, spontaneous form of learning than the style you were probably coached for in school. 1. 2. 3. Examples: 4. 5. 6. 7.

Nurse reveals the top 5 regrets people make on their deathbed By: Bronnie Ware, inspirationandchai.com. For many years I worked in palliative care. People grow a lot when they are faced with their own mortality. When questioned about any regrets they had or anything they would do differently, common themes surfaced again and again. 1. This was the most common regret of all. It is very important to try and honour at least some of your dreams along the way. 2. This came from every male patient that I nursed. By simplifying your lifestyle and making conscious choices along the way, it is possible to not need the income that you think you do. 3. Many people suppressed their feelings in order to keep peace with others. We cannot control the reactions of others. 4. Often they would not truly realise the full benefits of old friends until their dying weeks and it was not always possible to track them down. It is common for anyone in a busy lifestyle to let friendships slip. 5. This is a surprisingly common one. Life is a choice. Credits:

How a Radical New Teaching Method Could Unleash a Generation of Geniuses | Wired Business In 2009, scientists from the University of Louisville and MIT's Department of Brain and Cognitive Sciences conducted a study of 48 children between the ages of 3 and 6. The kids were presented with a toy that could squeak, play notes, and reflect images, among other things. For one set of children, a researcher demonstrated a single attribute and then let them play with the toy. Another set of students was given no information about the toy. This group played longer and discovered an average of six attributes of the toy; the group that was told what to do discovered only about four. A similar study at UC Berkeley demonstrated that kids given no instruction were much more likely to come up with novel solutions to a problem. Gopnik's research is informed in part by advances in artificial intelligence. A Brief History of Alternative Schools New research shows what educators have long intuited: Letting kids pursue their own interests sharpens their hunger for knowledge. 1921A.

5 Great TED Talks for Teachers As you probably know, this year's TED 2013 prize went to Sugata Mitra for his outstanding wish " School in The Cloud ". Digging through the achievements of this educational researcher, I found out that Sugatra is behind the popular Hole in The Wall experiments that proved that kids learn more in the absence of adult supervision and formal teaching. For Sugatra peer interest and curiosity are the main drives for kids' effective learning . The central idea behind hole-in-the-wall is that groups of children learn on their own without any direct intervention. One of the things that stood out to me when I read that paragraph above is the MIE concept. Minimally Invasive Education is defined as a pedagogic method that uses the learning environment to generate an adequate level of motivation to induce learning in groups of children, with minimal, or no, intervention by a teacher. 1- Sugatra : Build A School in The Cloud 2- Arvin Gupta : Turning trash into toys for learning