The Brain - Diagram and Explanation 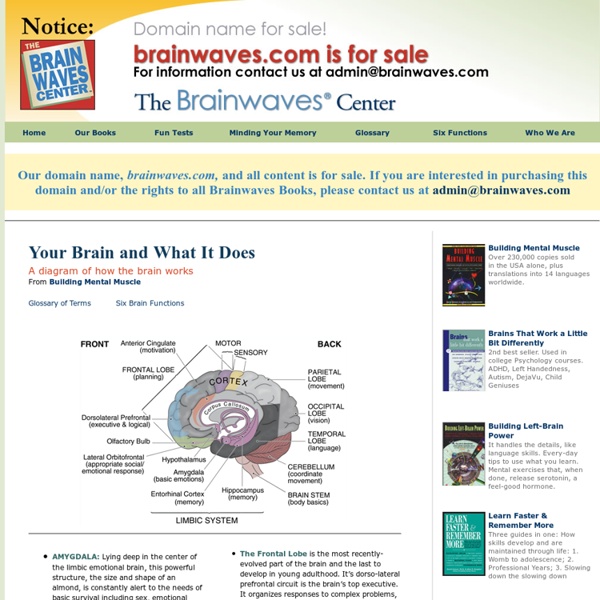 Brain Gym® Exercises By Kenneth Beare Updated December 16, 2014. Brain Gym® exercises are exercises designed to help the brain function better during the learning process. As such, you can think of Brain Gym® exercises as part of the overall theory of multiple intelligences. These exercises are based on the idea that simple physical exercise helps blood flow to the brain and can help improve the learning process by making sure the brain stays alert. Students can use these simple exercises on their own, and teachers can use them in class to help keep energy levels up throughout the day. These simple exercises are based on the copyrighted work of Paul E. continue reading below our video Loaded: 0% Progress: 0% Below is a series of movements called PACE. Drink Water As Carla Hannaford says, "Water comprises more of the brain (with estimates of 90%) than of any other organ of the body." Drinking water is very important before any stressful situation - tests! Brain Buttons Cross Crawl Stand or sit. Hook Ups Here

Home - Gymnasium for Brain Short-term memory is based on synchronized brain oscillations Scientists have now discovered how different brain regions cooperate during short-term memory. Holding information within one's memory for a short while is a seemingly simple and everyday task. We use our short-term memory when remembering a new telephone number if there is nothing to write at hand, or to find the beautiful dress inside the store that we were just admiring in the shopping window. Yet, despite the apparent simplicity of these actions, short-term memory is a complex cognitive act that entails the participation of multiple brain regions. However, whether and how different brain regions cooperate during memory has remained elusive. A group of researchers from the Max Planck Institute for Biological Cybernetics in Tübingen, Germany has now come closer to answering this question. It has long been known that brain regions in the frontal part of the brain are involved in short-term memory, while processing of visual information occurs primarily at the back of the brain.

BrainBuilder BrainBuilder® is the brain fitness program designed to improve your memory, attention and brainspeed! For children, teens and adults! Experience these REMARKABLE RESULTS with BrainBuilder: Better memory and attentionSharper focus and clearer thinkingImproved visual and auditory processingIncreased BrainSpeedStronger problem-solving skills Brain Coach The Coach will test your BrainSpeed, design your daily sessions, track your improvement, adjust your training program and motivate you along the way. Brain Exercises Train your brain with a library of more than 20 diverse, visual, auditory and focus exercises. Brain Music Each session begins and concludes with listening to psychoacoustically-based classical music produced with visual imagery to relax your body and alert your mind for optimal cognitive performance. Brain Games Enjoy fun and interactive brain games – each designed to engage and challenge you. Practice Area Progress Charts Results are measurable! Keep Your Brain Performing at Its Best! 1.

Schizophrenia diagnosis associated with progressive brain changes among adolescents Adolescents diagnosed with schizophrenia and other psychoses appear to show greater decreases in gray matter volume and increases in cerebrospinal fluid in the frontal lobe compared to healthy adolescents without a diagnosis of psychosis, according to a report in the January issue of Archives of General Psychiatry, one of the JAMA/Archives journals. “Progressive loss of brain gray matter (GM) has been reported in childhood-onset schizophrenia; however, it is uncertain whether these changes are shared by pediatric patients with different psychoses,” the authors write as background information in the study. Celso Arango, M.D., Ph.D., of the Hospital General Universitario Gregorio Marañón, Madrid, Spain, and colleagues, examined the progression of brain changes in first-episode early-onset psychosis and the relationship to diagnosis and prognosis at two-year follow-up among patients at six child and adolescent psychiatric units in Spain.

brainsource.com | Exploring the Human Brain Brain analysis can help predict psychosis: study Brain Training | Brain Exercises | Brain Fitness Games | Brain Metrix Hippocampus plays bigger memory role than previously thought Human memory has historically defied precise scientific description, its biological functions broadly but imperfectly defined in psychological terms. In a pair of papers published in the November 2 issue of The Journal of Neuroscience, researchers at the University of California, San Diego report a new methodology that more deeply parses how and where certain types of memories are processed in the brain, and challenges earlier assumptions about the role of the hippocampus. Specifically, Larry R. Recollection and familiarity memory are two components of recognition memory – the ability to identify an item as having been previously encountered. Prevailing research posits that recollection and familiarity memories involve different regions in the brain's medial temporal lobe: the hippocampus for recollection, the adjacent perirhinal cortex for familiarity. Recollection-based memories are typically associated with higher confidence and accuracy than familiarity-based decisions.

Mnemonik - Use your Brain Startseite