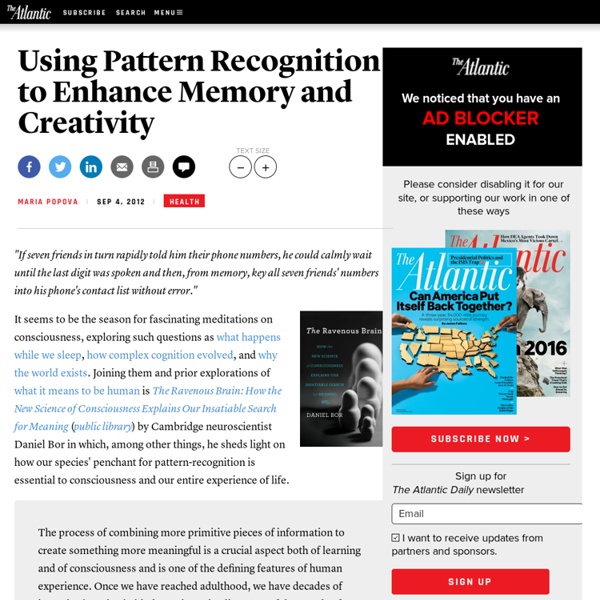 "If seven friends in turn rapidly told him their phone numbers, he could calmly wait until the last digit was spoken and then, from memory, key all seven friends' numbers into his phone's contact list without error." It seems to be the season for fascinating meditations on consciousness, exploring such questions as what happens while we sleep, how complex cognition evolved, and why the world exists. Joining them and prior explorations of what it means to be human is The Ravenous Brain: How the New Science of Consciousness Explains Our Insatiable Search for Meaning (public library) by Cambridge neuroscientist Daniel Bor in which, among other things, he sheds light on how our species' penchant for pattern-recognition is essential to consciousness and our entire experience of life. To illustrate the power of chunking, Bor gives an astounding example of how one man was able to use this mental mechanism in greatly expanding the capacity of his working memory.

21st Century Skills Definitions The IMLS Project Team and Task Force considered the list of skills commonly referred to as "21st Century Skills" and modified it slightly to better align with library and museum priorities.1 The resulting list includes the following additions: Basic Literacy, Scientific & Numerical Literacy, Visual Literacy, Cross-Disciplinary Skills, and Environmental Literacy. Not every skill on this list will be aligned with every institution’s vision and mission. Further, not every community will prioritize the same skills. Library and museum leaders should consider this list as a starting point beyond which it should be customized to fit the unique character, requirements, and priorities of the institution and its audiences. Reason Effectively

Pi Memorisation This section will help you memorize Pi. Pi is defined, in Euclidean geometry, as a constant which is the ratio of a circle's circumference to its diameter. Why Pi? Pi is a challenge to memorize because the number of digits in it are infinite, and there's no discernable pattern anywhere to the order of the digits. There are many other constants with these qualities (most notably e, the base of natural logarithms, and the square root of 2), but since Pi is usually introduced in geometry before other similar numbers, Pi is the most recognizable of these numbers. Together, all these qualities help make Pi a classic challenge, and allow you to determine to what degree you wish to meet the challenge.

James Heywood's blog A very long time ago. Many years before humans wrote the first grammar book… If Turkish is your mother tongue, then you might have difficulty with ago, earlier, before, after, in, and later. These words can be adverbs, conjunctions, prepositions and adjectives. Here I look at the most basic errors by Turks and provide a couple of examples to explain how you can use the idea of sonra and önce in English. Of course, this small article cannot explain every use of these words… but I think it might help a few of you. How to Build a Memory Palace (with Sample) <img alt="Image titled Build a Memory Palace Step 1" src=" width="728" height="546" class="whcdn">1Edit step1Decide on a blueprint for your palace. While a memory palace can be a purely imagined place, it is easier to base it upon a place that exists in the real world and that you are familiar with or you can use some places of your favorite video game. A basic palace could be your bedroom, for example. Larger memory palaces can be based on your house, a cathedral, a walk to the corner store, or your town. The larger or more detailed the real place, the more information you can store in the corresponding mental space. <img alt="Image titled Build a Memory Palace Step 2" src=" width="728" height="546" class="whcdn">2Edit step2Define a route.

40 websites that will make you cleverer right now The indexed web contains an incredible 14 billion pages. But only a tiny fraction help you improve your brain power. Here are 40 of the best. whizzpast.com – Learn about our awe inspiring past all in one wonderful place. Inspire Thoughtful Creative Writing Through Art A few years ago, I showed my sixth graders The Gulf Stream by Winslow Homer. It's an epic painting of a young black sailor in a small broken boat, surrounded by flailing sharks, huge swells, and a massive storm in the distance. I asked my students the simple question, "What's happening?" The responses ranged from "He's a slave trying to escape" to "He's a fisherman lost at sea." The common theme with the responses, though, was the tone -- most students were very concerned for his welfare. "That boat looks rickety.

Memorizing Dates - How To Remember Dates For A Test Dates are often difficult to remember because they seem so random and obscure unless we can relate them to something specific. For instance, the American Civil War started in 1861, but unless you have a strong interest in the specific timeline of the war, there is nothing special about the starting date that separates that date from any other. What makes 1861 stand apart from 1863 or 1851? When trying to memorize a date, students can really benefit from a mnemonic system (memory technique) to help them recall the right numbers in the right order. The role of language in education Thesis The role of language in education "Miss Kelly said that when you talk to somebody it's like you're playing ball. First the somebody asks you a question, and that means they throw the ball to you. But you have to do more than just catch a question like you catch a ball. Here's the important part.

The Method of Loci This is the first part of your guide to get a memory like an elephant. Memory-Sports.com will give you an insight in the amazing techniques of all mental athletes, starting with the famous Method of Loci. You will learn how to memorize numbers, cards, names and words and discover the fascinating world of Memory Sports. The Method of Loci This technique is as old as ancient democracy: The method of loci, used by Greek and Roman senators to hold their intoxicating speeches in front of the senate. It was proscribed to use any kind of notes, so they were using this brilliant technique to jack up their memory.