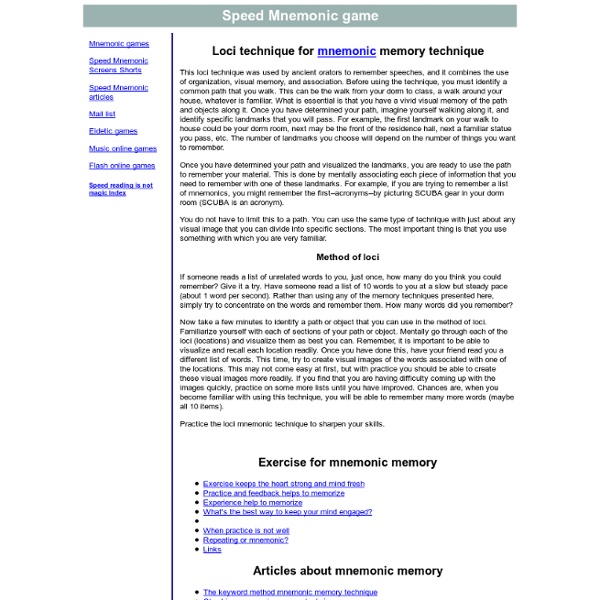 Loci technique for mnemonic memory technique This loci technique was used by ancient orators to remember speeches, and it combines the use of organization, visual memory, and association. Before using the technique, you must identify a common path that you walk. This can be the walk from your dorm to class, a walk around your house, whatever is familiar. Once you have determined your path and visualized the landmarks, you are ready to use the path to remember your material. You do not have to limit this to a path. Method of loci If someone reads a list of unrelated words to you, just once, how many do you think you could remember? Now take a few minutes to identify a path or object that you can use in the method of loci. Practice the loci mnemonic technique to sharpen your skills. Exercise for mnemonic memory Articles about mnemonic memory Related:  memory techniques • Art of Memorizing • Learning methods

The Method of Loci" The oldest known mnemonic strategy is called the method of loci ("loci" is the plural of locus, which means location, or place). It's based on the assumption that you can best remember places that you are familiar with, so if you can link something you need to remember with a place that you know very well, the location will serve as a clue that will help you to remember. Devised during the days of the Roman Empire, the method of loci is really a sort of linking method with a twist. According to Cicero, this method was developed by the poet Simonides of Ceos, who was the only survivor of a building collapse during a dinner he attended. Simonides was able to identify the dead, who were crushed beyond recognition, by remembering where the guests had been sitting. This method works especially well if you're good at visualizing. Think of a place you know well, such as your own house.Visualize a series of locations in the place in logical order. shaving creampeacheshot dogsketchupice cream

10 Ways Improve Your Memory & Boost Brainpower Have you ever noticed that some people are able to effortlessly remember even the most mundane details, and quickly comprehend new things, and wished that you too could be like that? Well, you can. To unlock the full potential of your brain, you need to keep it active and acute. Wasting away on your couch watching mindless television shows is not going to help. Exercise & get your body moving – exercising doesn’t just exercise the body, it also helps to exercise your brain. What are some tips or tricks you have food to increase your memory and keep your brain sharp? pts to others 10 ways to improve your observation skills (and your career), part III | Fast Track Tools by Ken Revenaugh How did you do on the observation test? If you found your observation skills lacking, it may be something to consider working on, as… For people who plan to become the leaders of tomorrow, developing a keen sense of observation is a must. The crux of the technique lies in simply keeping your eyes and ears open at all times and never failing to register what you see or hear. Some great habits that can help you build your observation skills are: Trying to look at every day life in a clear manner. Andrew Cox suggests these ten behaviors and habits of thought critical for developing accurate observation skills: Sizing up people – people watching Clarity – seeing the world as it is Curiosity – asking why Listening skills Willingness to set aside personal biases Willingness to seek the inputs of others Seeking out new experiences and possibilities Being comfortable with ambiguity Knowledge of the behaviors and attitudes of people

Method of loci The Method of Loci (plural of Latin locus for place or location), also called the memory palace , is a mnemonic device introduced in ancient Roman and Greek rhetorical treatises (in the anonymous Rhetorica ad Herennium , Cicero 's De Oratore , and Quintilian 's Institutio oratoria ). The items to be remembered in this mnemonic system are mentally associated with specific physical locations. [ 1 ] It relies on memorized spatial relationships to establish, order and recollect memorial content. The term is most often found in specialised works on psychology , neurobiology and memory , though it was used in the same general way at least as early as the first half of the nineteenth century in works on rhetoric , logic and philosophy . [ 2 ] Description [ edit ] O'Keefe and Nadel refer to 'the method of loci', an imaginal technique known to the ancient Greeks and Romans and described by Yates (1966) in her book The Art of Memory as well as by Luria (1969). Contemporary usage [ edit ]

Technologies of Qi – Energy Flows Where Attention Goes Can we direct Qi (or Chi) into our bodies using the power of imagination? The ancient practitioners of Tai Chi and Qigong definitely thought so. They taught that the flow of Qi energy is directe d by the mind, and it is through our imagination, that Qi is first felt, then reinforced. In their understanding of Qi, the mind and body cannot be separated. Beginning students learn to imagine Qi as a tingling sensation in the limbs, torso and palms of the hand, and then direct this sensation through the bodies meridians or energy pathways. This often poses a problem for the modern western student whose scientific mindset tells us anything imagined isn’t ‘real’. According to Lynne McTaggart’s bestselling book, The Intention Experiment: Using Your Thoughts to Change Your Life and the World, re search conducted on skiers showed that mentally rehearsing a run caused the same electrical impulses as those used while actually skiing the run.