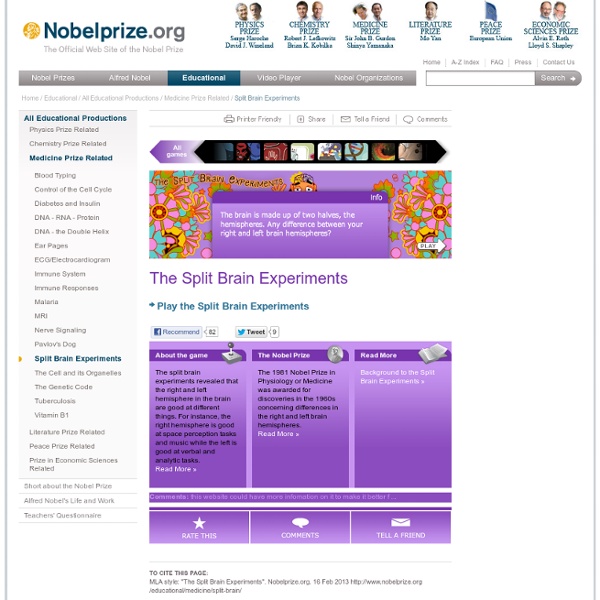 Lists of Nobel Prizes and Laureates The Split Brain Experiments Play the Split Brain Experiments About the game The split brain experiments revealed that the right and left hemisphere in the brain are good at different things. The Nobel Prize The 1981 Nobel Prize in Physiology or Medicine was awarded for discoveries in the 1960s concerning differences in the right and left brain hemispheres. Read More Background to the Split Brain Experiments » Share this: Share on facebook Share on google_plusone_share Share on twitter More Sharing Services Share on email To cite this pageMLA style: "The Split Brain Experiments". Recommended: The Legacy of Alfred Nobel On 27 November 1895 Alfred Nobel signed his last will in Paris. Play the Blood Typing Game Try to save some patients and learn about human blood types! Unlocking the Secrets of Our Cells Discover the 2012 awarded research on stem cells and cell signalling. Contact E-mail us Press Sitemap A-Z Index Frequently Asked Questions Terms Follow Follow us: Follow us: Related:  Nuerobiology

Brain-based learning, ideas, and materials The Limits of Intelligence Santiago Ramón y Cajal, the Spanish Nobel-winning biologist who mapped the neural anatomy of insects in the decades before World War I, likened the minute circuitry of their vision-processing neurons to an exquisite pocket watch. He likened that of mammals, by comparison, to a hollow-chested grandfather clock. Indeed, it is humbling to think that a honeybee, with its milligram-size brain, can perform tasks such as navigating mazes and landscapes on a par with mammals. A honeybee may be limited by having comparatively few neurons, but it surely seems to squeeze everything it can out of them. At the other extreme, an elephant, with its five-million-fold larger brain, suffers the inefficiencies of a sprawling Mesopotamian empire. Select an option below: Customer Sign In *You must have purchased this issue or have a qualifying subscription to access this content

10 Practical Uses For Psychological Research in Everyday Life | People love to give each other advice. The web is full to bursting with all types of pseudo-psychological advice about life. The problem is, how much of this is based on real scientific evidence? Well, here on PsyBlog we’ve got the scientific evidence. So here’s my top 10 list of what you can learn practically from the psychological research discussed here recently. 1. 2. 3. 4. 5. 6. 7. 8. 9. 10. The Dark Side of Oxytocin, the Hormone of Love - Ethnocentrism Yes, you knew there had to be a catch. As oxytocin comes into sharper focus, its social radius of action turns out to have definite limits. The love and trust it promotes are not toward the world in general, just toward a person’s in-group. Oxytocin turns out to be the hormone of the clan, not of universal brotherhood. A principal author of the new take on oxytocin is Carsten K. In a report published last year in Science, based on experiments in which subjects distributed money, he and colleagues showed that doses of oxytocin made people more likely to favor the in-group at the expense of an out-group. These nationalities were chosen because of a 2005 poll that showed that 51 percent of Dutch citizens held unfavorable opinions about Muslims, and other surveys that Germans, although seen by the Dutch as less threatening, were nevertheless regarded as “aggressive, arrogant and cold.” Well-socialized Dutch students might be unlikely to say anything derogatory about other groups. In Dr.

Behavioral neuroscience Behavioral neuroscience, also known as biological psychology,[1] biopsychology, or psychobiology[2] is the application of the principles of biology (in particular neurobiology), to the study of physiological, genetic, and developmental mechanisms of behavior in humans and non-human animals. It typically investigates at the level of neurons, neurotransmitters, brain circuitry and the basic biological processes that underlie normal and abnormal behavior. Often, experiments in behavioral neuroscience involve non-human animal models (such as rats and mice, and non-human primates) which have implications for better understanding of human pathology and therefore contribute to evidence-based practice. History[edit] Behavioral neuroscience as a scientific discipline emerged from a variety of scientific and philosophical traditions in the 18th and 19th centuries. Other philosophers also helped give birth to psychology. Relationship to other fields of psychology and biology[edit]

Sociobiology Sociobiology is a field of scientific study which is based on the assumption that social behavior has resulted from evolution and attempts to explain and examine social behavior within that context. Often considered a branch of biology and sociology, it also draws from ethology, anthropology, evolution, zoology, archaeology, population genetics, and other disciplines. Within the study of human societies, sociobiology is very closely allied to the fields of Darwinian anthropology, human behavioral ecology and evolutionary psychology. Sociobiology investigates social behaviors, such as mating patterns, territorial fights, pack hunting, and the hive society of social insects. It argues that just as selection pressure led to animals evolving useful ways of interacting with the natural environment, it led to the genetic evolution of advantageous social behavior. Definition[edit] The discipline seeks to explain behavior as a product of natural selection. Introductory example[edit] History[edit]

Mythbusters: 5 Amazing Facts about the Brain « psychosycho Here’s 5 incredible facts about your brain that will put those common myths to rest – and give you an insight into that amazing and intricate mass in your head. 1. Myth: We don’t grow new neurons after birth – BUSTED! In reality, humans produce new neurons throughout life in a process called adult neurogenesis. It has taken science a long time to bust this myth! Research from as far back as the 1980’s indicated that new neurons are made throughout life. 2. Here’s another myth that’s been around and won’t be beaten down. 3. In fact, there is no muscular tissue in the brain whatsoever. 4. Incredibly, your brain has some of the most intense periods of activity while you are sleeping!! 5. Overall brain size is not indicative of high IQ or other measures of intelligence. That’s just the tip of the iceberg in what we don’t know about the brain. So, all you smarty pants people out there, here’s one last little gem about the brain – see if you can answer correctly: Like this: Like Loading...

Researcher: Dopamine Not About Pleasure (Anymore) John Salamone, professor of psychology, at his office. (Peter Morenus/UConn Photo) To John Salamone, professor of psychology and longtime researcher of the brain chemical dopamine, scientific research can be very slow-moving. “It takes a long time for things to change in science,” he says. “It’s like pulling on the steering wheel of an ocean liner, then waiting for the huge ship to slowly turn.” Salamone, a UConn Board of Trustees Distinguished Professor, has spent most of his career battling a particular long-held scientific idea: the popular notion that high levels of brain dopamine are related to experiences of pleasure. In the early 1980’s, explains Salamone, the National Institute on Drug Abuse put out a call for research on the neurological basis for drug abuse and addiction. The research that ensued built support for the idea that when the brain produced elevated amounts of dopamine, it was accompanied by perceptions of pleasure. “Science is not a collection of facts.

The Schmidt Sting Pain Index: How Much Could You Take? Have you ever been stung by a bee? Want to know how much you have suffered on a scale of one to four? Then take a look at the Schmidt Sting Pain Index which rates the relative pain caused by the sting of hymenoptera. That would be sawflies, wasps, bees and ants to most of us.The Sweat Bee Schmidt describes the sting of the Sweat Bee as “Light, ephemeral, almost fruity. They are very common all over the world except in South East Asia and Australia where there are few branches of the family tree known as Halicitidae. The Fire Ant Coming in at 1.2 on the scale is the Fire Ant (species in the genus Solenopsis). If you don’t leave it alone the bump can become infected as it forms a milky white pustule which reacts badly to scratching. The Acacia Ant Mutualism is a symbiotic relationship between two species, and so it is with the Bullhorn Acacia and the eponymous ant that inhabits its hollowed out thorns. Bald Faced Hornet The Black Faced Hornet is an imposter! The Yellowjacket The Honey Bee

Brain Waves And The Deeper States Of Consciousness Every part of your body vibrates to its own rhythm. Your brain has a unique set of brain waves. In neuroscience, there are five distinct brain wave frequencies, namely Beta, Alpha, Theta, Delta and the lesser known Gamma. Each frequency, measured in cycles per second (Hz), has its own set of characteristics representing a specific level of brain activity and hence a unique state of consciousness. Beta (12-30Hz): Beta brain waves are associated with normal waking consciousness and a heightened state of alertness, logic and critical reasoning. Alpha (7.5-12Hz): Alpha brain waves are present in deep relaxation with the eyes usually closed and while day-dreaming. The following chart shows the EEG (Electroencephalography) graphs of the four major levels of brain activity. The Alpha-Theta border, from 7 to 8Hz, is the optimal range for visualization, mind programming and using the creative power of your mind. Credits: Tania Kotsos of www.mind-your-reality.com Image: Credits