How to Learn Without Memorizing 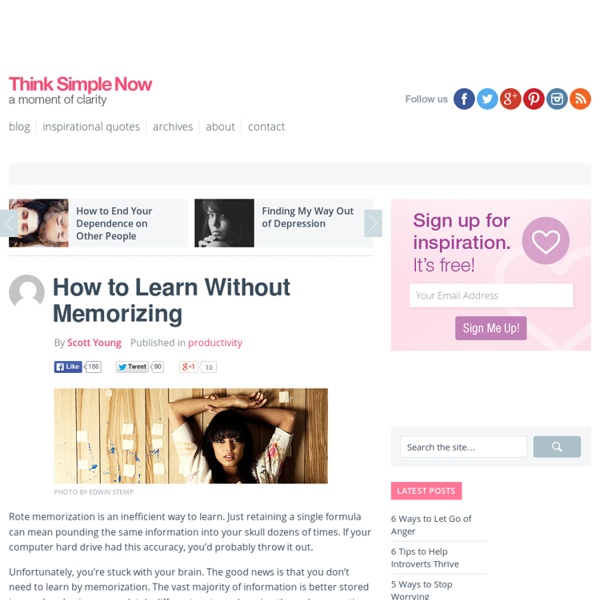 Photo by Edwin Stemp Rote memorization is an inefficient way to learn. Just retaining a single formula can mean pounding the same information into your skull dozens of times. If your computer hard drive had this accuracy, you’d probably throw it out. Unfortunately, you’re stuck with your brain. The good news is that you don’t need to learn by memorization. A few years ago, I noticed that smart people seemed to learn differently than most other people. While there are undoubtedly some genetic advantages that allow some people to learn effortlessly, I think part of this difference in success comes down to strategy. Is Your Brain a File Drawer or a Web of Ideas? A computer stores information as thousands of electrical 1s and 0s in a linear fashion. However, your brain isn’t a sequence of bits and bytes, so this approach doesn’t make sense. Other Forms of Learning There are lots of ways you can learn creatively: 1. Connect ideas together by relating them to something you already understand. 2.

Two Suns? Twin Stars Could Be Visible From Earth By 2012 By Dean Praetorius | HuffingtonPost.com Earth could be getting a second sun, at least temporarily. Dr. Brad Carter, Senior Lecturer of Physics at the University of Southern Queensland, outlined the scenario to news.com.au. Francesc Ferrer i Guàrdia Francesc Ferrer i Guàrdia (10 January 1859 – 13 October 1909)[1] (known as Francisco Ferrer y Guardia in Spanish and often simply as Francisco Ferrer) was a Spanish anarchist. Life[edit] He was born in Alella (a small town near Barcelona) to Roman Catholic parents. He was sent to work on a Barcelona firm at the age of 15. Learning Styles - Learning skills from MindTools Understanding Learning Preferences Identifying your preferred style of learning can make gaining new knowledge and skills easier. Have you ever tried to learn something fairly simple, yet failed to grasp the key ideas? Or tried to teach people and found that some were overwhelmed or confused by something quite basic? If so, you may have experienced a clash of learning styles: your learning preferences and those of your instructor or audience may not have been aligned. When this occurs, not only is it frustrating for everyone, the communication process breaks down and learning fails.

10 simple ways to save yourself from messing up your life Stop taking so much notice of how you feel. How you feel is how you feel. It’ll pass soon. What you’re thinking is what you’re thinking. It’ll go too. Anyone can learn to be a polymath – Robert Twigger I travelled with Bedouin in the Western Desert of Egypt. When we got a puncture, they used tape and an old inner tube to suck air from three tyres to inflate a fourth. It was the cook who suggested the idea; maybe he was used to making food designed for a few go further. Far from expressing shame at having no pump, they told me that carrying too many tools is the sign of a weak man; it makes him lazy. The real master has no tools at all, only a limitless capacity to improvise with what is to hand.

Mental Math Tricks to Impress Your Friends One thing that fascinates me is performing mental math. Being able to quickly perform additions, subtraction, multiplications etc is a good way to impress your friends. The problem is, I’m not a math genius, and I don’t know much behind simple arithmetic. If you’re anything like me, but you’d still like to learn some basic math tricks, I hope you’ll find this list useful.

Surprises in steel: The mystery behind Detroit entrepreneur's revolutionary Flash Bainite A Detroit entrepreneur surprised academics when he invented a heat-treatment that makes steel 7 percent stronger than any steel on record – in less than 10 seconds. That steel, now trademarked as Flash Bainite, has tested stronger and more shock-absorbing than the most common titanium alloys used by industry. Now Gary Cola is helping researchers at Ohio State University to better understand the science behind the new treatment, called flash processing. What they've discovered may hold the key to making cars and military vehicles lighter, stronger, and more fuel-efficient. In the current issue of Materials Science and Technology, the inventor and his Ohio State partners describe how rapidly heating and cooling steel sheets changes the microstructure inside the alloy to make it stronger and less brittle.

Pedagogy of the Oppressed Pedagogy of the Oppressed (Portuguese: Pedagogia do Oprimido), written by educator Paulo Freire, proposes a pedagogy with a new relationship between teacher, student, and society. It was first published in Portuguese in 1968, and was translated by Myra Ramos into English and published in 1970.[1] The book is considered one of the foundational texts of critical pedagogy. Dedicated to what is called "the oppressed" and based on his own experience helping Brazilian adults to read and write, Freire includes a detailed Marxist class analysis in his exploration of the relationship between what he calls "the colonizer" and "the colonized". In the book Freire calls traditional pedagogy the "banking model" because it treats the student as an empty vessel to be filled with knowledge, like a piggy bank. However, he argues for pedagogy to treat the learner as a co-creator of knowledge. The book has sold over 750,000 copies worldwide.[2]