Your Memory Palace: Method of Loci 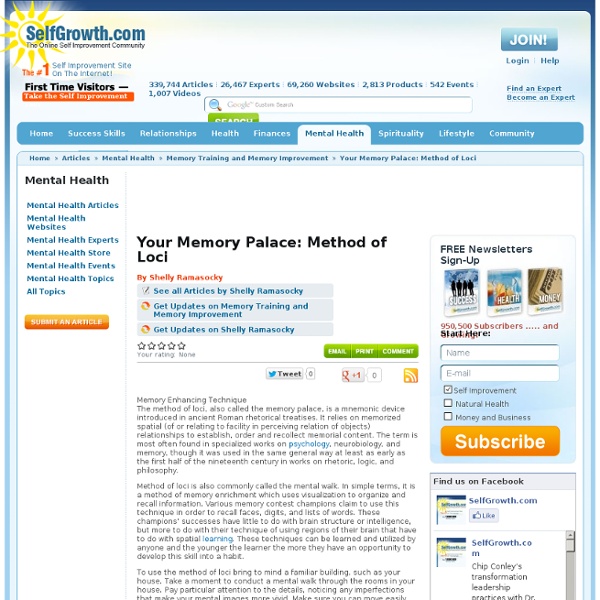 Memory Enhancing Technique The method of loci, also called the memory palace, is a mnemonic device introduced in ancient Roman rhetorical treatises. It relies on memorized spatial (of or relating to facility in perceiving relation of objects) relationships to establish, order and recollect memorial content. The term is most often found in specialized works on psychology, neurobiology, and memory, though it was used in the same general way at least as early as the first half of the nineteenth century in works on rhetoric, logic, and philosophy. Method of loci is also commonly called the mental walk. In simple terms, it is a method of memory enrichment which uses visualization to organize and recall information. Various memory contest champions claim to use this technique in order to recall faces, digits, and lists of words. To use the method of loci bring to mind a familiar building, such as your house. Don’t believe that it will work? 1. 2. 3. 4. 5. 6. 7. Author's Bio: Happy Reading!

10 ways to improve your observation skills (and your career), part III How did you do on the observation test? If you found your observation skills lacking, it may be something to consider working on, as… For people who plan to become the leaders of tomorrow, developing a keen sense of observation is a must. The crux of the technique lies in simply keeping your eyes and ears open at all times and never failing to register what you see or hear. Some great habits that can help you build your observation skills are: Trying to look at every day life in a clear manner. LOCI Method of mnemonic memory technique Loci technique for mnemonic memory technique This loci technique was used by ancient orators to remember speeches, and it combines the use of organization, visual memory, and association. Before using the technique, you must identify a common path that you walk. This can be the walk from your dorm to class, a walk around your house, whatever is familiar. What is essential is that you have a vivid visual memory of the path and objects along it.

The ancient arts of memory improvement posted on Saturday, April, 10th, 2010 10:30 am “The main course was just being served in the massive, ancient Greek hall when the expansive ceiling collapsed, crushing every one of the many guests in their seats. Not a single attendee survived, except for the poet Simonides, who had left the room just before the tragedy. In the days that followed, workers who lifted the heavy rubble found that the victims were so horribly disfigured that they were impossible to identify.

How to Learn Without Memorizing Photo by Edwin Stemp Rote memorization is an inefficient way to learn. Just retaining a single formula can mean pounding the same information into your skull dozens of times. 10 Ways Improve Your Memory & Boost Brainpower Have you ever noticed that some people are able to effortlessly remember even the most mundane details, and quickly comprehend new things, and wished that you too could be like that? Well, you can. To unlock the full potential of your brain, you need to keep it active and acute. Wasting away on your couch watching mindless television shows is not going to help. Besides getting out flashcards, what can you do to help remember things better and learn new things more quickly?

The Method of Loci" The oldest known mnemonic strategy is called the method of loci ("loci" is the plural of locus, which means location, or place). It's based on the assumption that you can best remember places that you are familiar with, so if you can link something you need to remember with a place that you know very well, the location will serve as a clue that will help you to remember. Devised during the days of the Roman Empire, the method of loci is really a sort of linking method with a twist. According to Cicero, this method was developed by the poet Simonides of Ceos, who was the only survivor of a building collapse during a dinner he attended. Simonides was able to identify the dead, who were crushed beyond recognition, by remembering where the guests had been sitting. From this experience, he realized that it would be possible to remember anything by associating it with a mental image of a location.

Method of loci The Method of Loci (plural of Latin locus for place or location), also called the memory palace , is a mnemonic device introduced in ancient Roman and Greek rhetorical treatises (in the anonymous Rhetorica ad Herennium , Cicero 's De Oratore , and Quintilian 's Institutio oratoria ). The items to be remembered in this mnemonic system are mentally associated with specific physical locations. [ 1 ] It relies on memorized spatial relationships to establish, order and recollect memorial content. The term is most often found in specialised works on psychology , neurobiology and memory , though it was used in the same general way at least as early as the first half of the nineteenth century in works on rhetoric , logic and philosophy . [ 2 ]

Boost Your Brain Power: 7 Tips for Improving Your Memory Surely, constantly forgetting what you were doing in the middle of doing something and constantly looking for your misplaced house keys is not the ideal way to spend your golden years. Don't wait until it is too late to start thinking about improving your memory. If you are bad at remembering simple to-do tasks, other people's names, your girlfriend's birthday, and other relevant pieces of information, use some of the most useful mnemonic devices illustrated below to help you retain things more permanently in your brain space. More importantly, be sure to practice good physical and mental health habits on a regular basis to keep your memory and brain stamina high.

Yes, You Too Can Read at 1000 Words Per Minute - Testing Circus Ever wondered how to read faster. Here is a solution that will allow you to read 1000 words per minute. Spritz, a Boston based start-up, is developing a technology that would enable you to read up to 1000 words per minutes. How to Remember 100 Things Four-time winner of the World Memory Championship, Dominic O’Brien can memorize the order of a full deck of playing cards in less than a minute. This ability, as well as easily memorizing 100 items, can be learned when you understand the techniques that Dominic uses. Dominic O’Brien has come up with an ingenious mnemonic system that is much easier to use than the previous memory system, called the Major System. It is similar in the sense that each digit is assigned a specific sound, in this case a letter: Step 1: Create Letter/Name List Here, you don’t randomly create nouns or phrases based off of the combination of the letters.

Memorizing Dates - How To Remember Dates For A Test Dates are often difficult to remember because they seem so random and obscure unless we can relate them to something specific. For instance, the American Civil War started in 1861, but unless you have a strong interest in the specific timeline of the war, there is nothing special about the starting date that separates that date from any other. What makes 1861 stand apart from 1863 or 1851? When trying to memorize a date, students can really benefit from a mnemonic system (memory technique) to help them recall the right numbers in the right order. For memorizing dates it might be helpful to borrow a practice from the London Cockneys.