The Brain-Information about the Brain 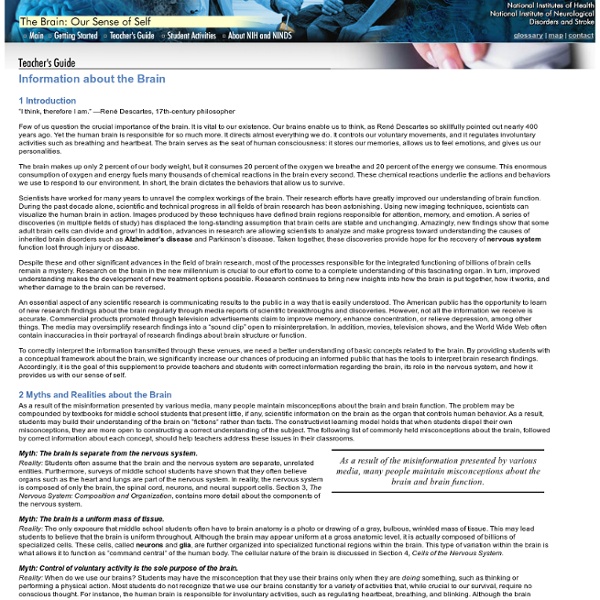 1 Introduction “I think, therefore I am.” —René Descartes, 17th-century philosopher Few of us question the crucial importance of the brain. It is vital to our existence. Our brains enable us to think, as René Descartes so skillfully pointed out nearly 400 years ago. The brain makes up only 2 percent of our body weight, but it consumes 20 percent of the oxygen we breathe and 20 percent of the energy we consume. Scientists have worked for many years to unravel the complex workings of the brain. Despite these and other significant advances in the field of brain research, most of the processes responsible for the integrated functioning of billions of brain cells remain a mystery. An essential aspect of any scientific research is communicating results to the public in a way that is easily understood. To correctly interpret the information transmitted through these venues, we need a better understanding of basic concepts related to the brain. 2 Myths and Realities about the Brain Figure 1.

Nihilism Nihilism is also a characteristic that has been ascribed to time periods: for example, Jean Baudrillard and others have called postmodernity a nihilistic epoch,[4] and some Christian theologians and figures of religious authority have asserted that postmodernity[5] and many aspects of modernity[3] represent a rejection of theism, and that such rejection of their theistic doctrine entails nihilism. Forms of nihilism[edit] Nihilism has many definitions, and thus can describe philosophical positions that are arguably independent. [edit] Metaphysical nihilism is the philosophical theory that there might be no objects at all—that is, that there is a possible world where there are no objects at all—or at least that there might be no concrete objects at all—so that even if every possible world contains some objects, there is at least one that contains only abstract objects. Epistemological nihilism[edit]

I.A. images Like many kids, Antonio Torralba began playing around with computers when he was 13 years old. Unlike many of his friends, though, he was not playing video games, but writing his own artificial intelligence (AI) programs. Growing up on the island of Majorca, off the coast of Spain, Torralba spent his teenage years designing simple algorithms to recognize handwritten numbers, or to spot the verb and noun in a sentence.

Perceiving a Stranger's Voice as Being One's Own: A ‘Rubber Voice’ Illusion? We describe an illusion in which a stranger's voice, when presented as the auditory concomitant of a participant's own speech, is perceived as a modified version of their own voice. When the congruence between utterance and feedback breaks down, the illusion is also broken. Compared to a baseline condition in which participants heard their own voice as feedback, hearing a stranger's voice induced robust changes in the fundamental frequency (F0) of their production. Moreover, the shift in F0 appears to be feedback dependent, since shift patterns depended reliably on the relationship between the participant's own F0 and the stranger-voice F0. The shift in F0 was evident both when the illusion was present and after it was broken, suggesting that auditory feedback from production may be used separately for self-recognition and for vocal motor control.

Brain's connective cells are much more than glue: Glia cells also regulate learning and memory Glia cells, named for the Greek word for "glue," hold the brain's neurons together and protect the cells that determine our thoughts and behaviors, but scientists have long puzzled over their prominence in the activities of the brain dedicated to learning and memory. Now Tel Aviv University researchers say that glia cells are central to the brain's plasticity -- how the brain adapts, learns, and stores information. According to Ph.D. student Maurizio De Pittà of TAU's Schools of Physics and Astronomy and Electrical Engineering, glia cells do much more than hold the brain together. A mechanism within the glia cells also sorts information for learning purposes, De Pittà says. "Glia cells are like the brain's supervisors.

Human brains unlikely to evolve into a 'supermind' as price to pay would be too high Public release date: 7-Dec-2011 [ Print | E-mail Share ] [ Close Window ] Contact: Anna Blackabya.blackaby@warwick.ac.uk 44-024-765-75910University of Warwick Human minds have hit an evolutionary "sweet spot" and - unlike computers - cannot continually get smarter without trade-offs elsewhere, according to research by the University of Warwick. Researchers asked the question why we are not more intelligent than we are given the adaptive evolutionary process. Their conclusions show that you can have too much of a good thing when it comes to mental performance.

Ship of Theseus The paradox had been discussed by more ancient philosophers such as Heraclitus, Socrates, and Plato prior to Plutarch's writings; and more recently by Thomas Hobbes and John Locke. There are several variants, notably "grandfather's axe". This thought experiment is "a model for the philosophers"; some say, "it remained the same," some saying, "it did not remain the same".[1]

Every line becomes a circle line: a new way to see the tube map There have been quite a few variations of the iconic London Underground map in the past but Dr Max Roberts has now created a design based on concentric circles. In his guest blog on the Going Underground blog, Dr Roberts writes: ""With the new orbital loop surrounding Central London, some people are suggesting a mapping approach based on circles to emphasise this feature. There is nothing new here, and Berlin, Paris, Moscow and Madrid have all received this treatment in the past. Grounding a map in familiar shapes such as circles can make it easy to comprehend." Brain Collector Seeks Trump-Like Donors to Probe How Personality Is Formed Jacopo Annese wants Donald Trump’s brain, literally. That’s the example cited by Annese, a 45-year-old neurologist, in describing who might be the ideal candidate for a 1,000-donor campaign being run this year by his University of California San Diego brain bank. The center is seeking people who can supply detailed life histories before they die, and their physical brains afterward. Annese already is working with a former flying monkey from the “Wizard of Oz,” and a woman who can’t feel fear. Trump’s history as a real-estate developer, author and TV star would be a good addition, he said. The center, begun six years ago, is creating novel technologies and strategies to help researchers study how personality, memories, emotions and other traits are reflected within the brain’s chemical and electrical signaling systems.