Improve Your Memory by Speaking Your Mind’s Language 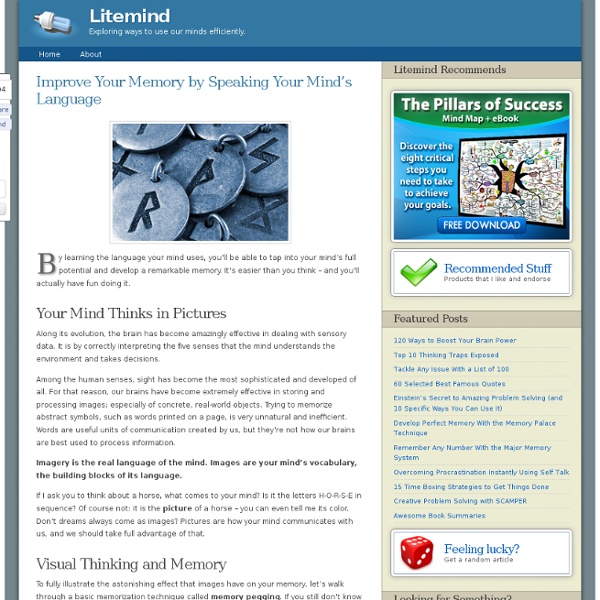 By learning the language your mind uses, you’ll be able to tap into your mind’s full potential and develop a remarkable memory. It’s easier than you think – and you’ll actually have fun doing it. Your Mind Thinks in Pictures Along its evolution, the brain has become amazingly effective in dealing with sensory data. It is by correctly interpreting the five senses that the mind understands the environment and takes decisions. Among the human senses, sight has become the most sophisticated and developed of all. Imagery is the real language of the mind. If I ask you to think about a horse, what comes to your mind? Visual Thinking and Memory To fully illustrate the astonishing effect that images have on your memory, let’s walk through a basic memorization technique called memory pegging. Before getting to the technique, let me give you a simple challenge: memorize a groceries list of ten items. baconeggswinebatteriesbubble gummilkenvelopesspinachcoffeetomato Learning Your Mind’s Basic Vocabulary

Develop Perfect Memory With the Memory Palace Technique The Memory Palace is one of the most powerful memory techniques I know. It’s not only effective, but also fun to use — and not hard to learn at all. The Memory Palace has been used since ancient Rome, and is responsible for some quite incredible memory feats. Eight-time world memory champion Dominic O’Brien, for instance, was able to memorize 54 decks of cards in sequence (that’s 2808 cards), viewing each card only once. And there are countless other similar achievements attributed to people using the Memory Palace technique or variations of it. Even in fiction, there are several references to the technique.

how to erase memory (PhysOrg.com) -- Researchers working with mice have discovered that by removing a protein from the region of the brain responsible for recalling fear, they can permanently delete traumatic memories. Their report on a molecular means of erasing fear memories in rodents appears this week in Science Express. “When a traumatic event occurs, it creates a fearful memory that can last a lifetime and have a debilitating effect on a person’s life,” says Richard L. Huganir, Ph.D., professor and director of neuroscience at the Johns Hopkins University School of Medicine and a Howard Hughes Medical Institute investigator. “Our finding describing these molecular and cellular mechanisms involved in that process raises the possibility of manipulating those mechanisms with drugs to enhance behavioral therapy for such conditions as post-traumatic stress disorder.”

77 Brain Hacks to Learn Faster, Deeper, and Better Source: Online Education Database If someone granted you one wish, what do you imagine you would want out of life that you haven't gotten yet? For many people, it would be self-improvement and knowledge. New knowledge is the backbone of society's progress. What is Mind Mapping? (and How to Get Started Immediately) A mind map is a graphical way to represent ideas and concepts. It is a visual thinking tool that helps structuring information, helping you to better analyze, comprehend, synthesize, recall and generate new ideas. Just as in every great idea, its power lies in its simplicity. In a mind map, as opposed to traditional note taking or a linear text, information is structured in a way that resembles much more closely how your brain actually works. Since it is an activity that is both analytical and artistic, it engages your brain in a much, much richer way, helping in all its cognitive functions.

How To Remember Things I once came up with a metaphor I thought perfectly captured the sheer mass of material my classmates and I were expected to memorize in our first two years of medical school: it was like being asked to enter a grocery store and memorize the names of every product in the store, their number and location, every ingredient in every product in the order in which they appear on the food label, and then to do the same thing in every grocery store in the city. When I look back now I can't imagine how any of us were able to do it. And yet we did. The mind's capacity to store and recall information is truly wondrous. 10 Things you didn't know about sound Shh! Make your life sound better Julian Treasure: Sounds we hear have an important effect on our lives and healthNoise can cause physical harm and sound can heal, he saysHe says headphone abuse is creating deaf kidsMore research needed to fully understand how what we hear affects our health, he says Editor's note: TED is a nonprofit organization devoted to "Ideas worth spreading," which it makes available through talks posted on its website.

The Horrors of Public Education “School sucks.” Most students will agree, and many have voiced their disgust concerning this abomination we call public education. They spite the good students who obey like little sheep, frown at imposed conformity, and laugh at the hypocritical nature of the system. The same will be done here, but there is a big difference between these defiant students and me, the author. I was one of those good little sheep. 5 Ways To Hack Your Brain Into Awesomeness Much of the brain is still mysterious to modern science, possibly because modern science itself is using brains to analyze it. There are probably secrets the brain simply doesn't want us to know. But by no means should that stop us from tinkering around in there, using somewhat questionable and possibly dangerous techniques to make our brains do what we want. We can't vouch for any of these, either their effectiveness or safety. All we can say is that they sound awesome, since apparently you can make your brain...

6 Daily Rituals It’s Tuesday morning at 8 a.m. Two San Francisco entrepreneurs are pitching their ventures to potential investors today. They’d both agree that this is one of the most important days of their lives. How to improve long-term memory Memories are constantly in flux, decaying as soon as they have begun to form. Although you can't count memories, if you could, you'd soon discover that more than half of what we experience is inaccessible to memory within a single hour. For this reason, when learning, it is best to continuously and cyclically review information as you go. Optimal revision During the 19th century, Hermann Ebbinghaus, a German psychologist, spent more than 15 years learning random strings of nonsense syllables, and testing himself on their recall.

The Pathology of Love The Pathology of Love By: Dr. Sam Vaknin Click HERE to view the video 52 Tips for Happiness and Productivity By Leo Babauta This is something I’ve been wanting to write for some time — a Handbook for Life. Now, is there any handbook that can be a guide to every single person? Critical Thinking By Example 1.1 Two Conventions for Standardizing To standardize an argument is to break it down into its components in a manner that shows the logical relationships between the parts. An argument, in our technical sense, is a reason or reasons offered in support of a conclusion. So, for anything to qualify as an argument it must have two components: at least one reason and one conclusion.