"Teleported" mice reveal secrets of memory. OK, I skimmed the Nature article, and it doesn't appear to say this at all. 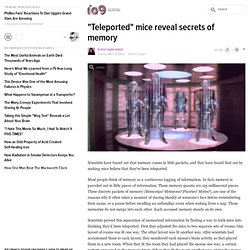 Either this post references the wrong article, or the author didn't read paper, and is telling us what is going on second-hand, trying to analyze things and draw conclusions along the way. Can somebody who knows about memory and rat brains and such double-check if my interpretation of the article is correct? First of all, the article talks about rats, not mice. Second, the article (at least from what I can understand) says nothing about memory quanta. It also does not generalize to all memory - it is talking about spacial awareness and mapping. Third, what the article actually says (or appears to say) is that the mental maps in the rats' brains flickered between one state or the other.

Fourth, that does not imply memory quantization, but says that a spacial map in the rat's brain is somehow a whole structure, stored and switched to very quickly. Anyway, seems like sloppy research on somebody's part. Instant Expert: Memory. How Does the Brain Retain Info? How Our Brains Make Memories. Sitting at a sidewalk café in Montreal on a sunny morning, Karim Nader recalls the day eight years earlier when two planes slammed into the twin towers of the World Trade Center. 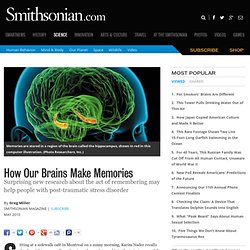 He lights a cigarette and waves his hands in the air to sketch the scene. At the time of the attack, Nader was a postdoctoral researcher at New York University. He flipped the radio on while getting ready to go to work and heard the banter of the morning disc jockeys turn panicky as they related the events unfolding in Lower Manhattan. Nader ran to the roof of his apartment building, where he had a view of the towers less than two miles away. He stood there, stunned, as they burned and fell, thinking to himself, “No way, man. In the following days, Nader recalls, he passed through subway stations where walls were covered with notes and photographs left by people searching desperately for missing loved ones. Is a Memory Pill a Good Idea? Tricks for remembering names. Following up on the earlier post about becoming a better listener, I get the feeling I'm not the only one with problems remembering peoples' names. 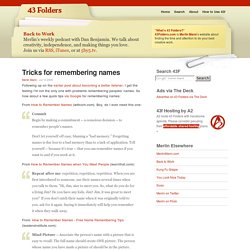 Researchers from the University of California, Irvine reported in 2006 on a woman named Jill Price who could remember in great detail what she did on a particular day decades earlier. 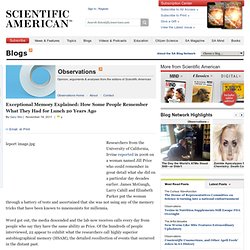 James McGaugh, Larry Cahill and Elizabeth Parker put the woman through a battery of tests and ascertained that she was not using any of the memory tricks that have been known to mnemonists for millennia. Word got out, the media descended and the lab now receives calls every day from people who say they have the same ability as Price. Of the hundreds of people interviewed, 22 appear to exhibit what the researchers call highly superior autobiographical memory (HSAM), the detailed recollection of events that occurred in the distant past.

A question that has persisted about this line of research is whether the brains of these people are distinct from the organs of others who can’t remember yesterday’s lunch, let alone trivial events from 20 years back. Source: University of California, Irvine. Memory Improvement Techniques - Improve Your Memory with MindTools.com - StumbleUpon. © VeerPRZEMYSLAW PRZYBYLSKI Use these techniques to improve your memory. The tools in this section help you to improve your memory. What does a doodle do? It boosts your memory and concentration. You know you're bored when you start shading in the squares of your notebook. 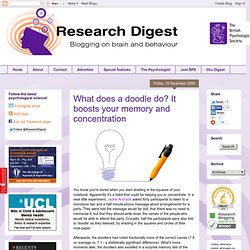 Apparently it's a habit that could be helping you to concentrate. In a neat little experiment, Jackie Andrade asked forty participants to listen to a monotone two and a half minute phone message about arrangements for a party. They were told the message would be dull, that there was no need to memorise it, but that they should write down the names of the people who would be able to attend the party.

Crucially, half the participants were also told to 'doodle' as they listened, by shading in the squares and circles of their note-paper. Afterwards, the doodlers had noted fractionally more of the correct names (7.8 on average vs. 7.1 - a statistically significant difference). Andrade said more research is obviously needed to find out how doodling helps us maintain our attention. Why you forgot what you were just doing.

By Maren KasselikMen's Health Have you ever walked into a room and realized you don’t remember what you’re doing there? 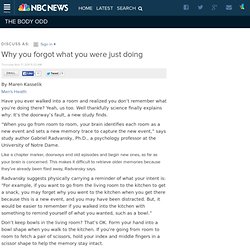 Yeah, us too. Well thankfully science finally explains why: It’s the doorway’s fault, a new study finds. “When you go from room to room, your brain identifies each room as a new event and sets a new memory trace to capture the new event,” says study author Gabriel Radvansky, Ph.D., a psychology professor at the University of Notre Dame. Like a chapter marker, doorways end old episodes and begin new ones, as far as your brain is concerned.