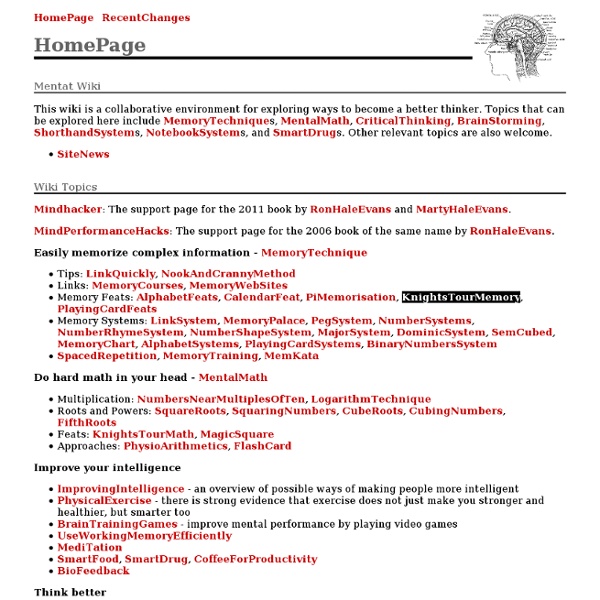 This wiki is a collaborative environment for exploring ways to become a better thinker. Topics that can be explored here include MemoryTechniques, MentalMath, CriticalThinking, BrainStorming, ShorthandSystems, NotebookSystems, and SmartDrugs. Other relevant topics are also welcome. SiteNews Wiki Topics Mindhacker: The support page for the 2011 book by RonHaleEvans and MartyHaleEvans. MindPerformanceHacks: The support page for the 2006 book of the same name by RonHaleEvans. Easily memorize complex information - MemoryTechnique Do hard math in your head - MentalMath Improve your intelligence Think better Other pages What is a Wiki? A wiki is a web site built collaboratively by a community of users. Feel free to add your own content to this wiki. The Mentat Wiki is powered by Oddmuse, and hosted by the Center for Ludic Synergy. Related:  Psychology

Mentat Training Plan Getting really good at mental skills requires lots of practice. Just as you can only become a great pianist, sportsman or chess player with dedicated practice, most of the skills on this wiki - such as memory training, mental calculation, and logic - also need practice to get really good at them. So to reach the goal of becoming a better thinker, we need a training plan. That's what this page, currently under construction, is here to provide. Aims of the Mentat training plan This plan aims to be: Ambitious. What outcomes can we realistically expect from a training regime? Firstly, we can train specific skills. Secondly, we could try to improve general intelligence. Outline Getting the basics right - diet, nutrition and exerciseKey principles of MasteringSkillsOptimising long term learning with SpacedRepetitionFurther improving long term memory with MemorySystemsToning up the brain with BrainTrainingGamesLearn to calculate with MentalMath techniques The training day Online training

Flow (psychology) Concentrating on a task is one aspect of flow. In positive psychology, flow, also known colloquially as being in the zone, is the mental state of operation in which a person performing an activity is fully immersed in a feeling of energized focus, full involvement, and enjoyment in the process of the activity. In essence, flow is characterized by complete absorption in what one does, and a resulting loss in one's sense of space and time. Flow shares many characteristics with hyperfocus. Just as with the conditions listed above, these conditions can be independent of one another. Ideas similar to flow have been recognized throughout history and across cultures. Flow theory postulates three conditions that have to be met to achieve a flow state: Schaffer (2013) proposed 7 flow conditions: Young child, painting a model If the operator is receiving data at too slow a rate, he is likely to become bored and attend to other irrelevant data. Flow may occur in challenging sports such as eventing.

CONFLICTS WITH OURSELVES: LESSONS FROM CHARLIE BROWN | From Insults To Respect Lately, we have been focusing largely on conflicts that deal with one person having a conflict with another person. We call these interpersonal conflicts. Today we begin to turn our attention to intrapersonal conflicts. This type of conflict occurs when a person has a conflict with himself or herself. We can see both of these types of conflicts occurring in the following Peanuts comic. The intrapersonal conflict is within Charlie Brown. The letters of the word, “DIG,” helps to remind us that when we want to describe a conflict in some situation, it is helpful to first dig to find the DESIRE, then something that INTERFERES with the desire, and, finally, the GUILT. Charlie Brown seems to desire that he not yell at his baby sister, but the fact that he did has led him to perceive that, interfering with his desire, he is likely to continue his yelling at his sister in the future. In this next comic, again Charlie Brown has an intrapersonal conflict. Let’s try one more. Good.