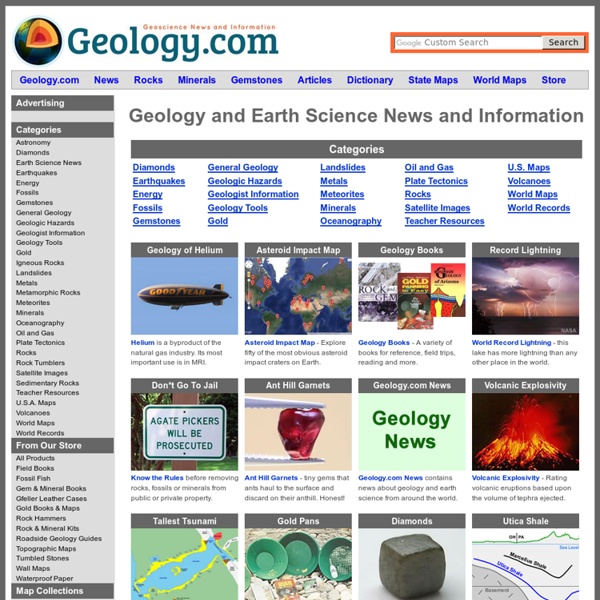 Related:  know about world • The Only Earth We Have

An Epochal Discovery: A Habitable Planet Orbits Our Neighboring Star One hundred and one years ago this October, a Scottish astronomer named Robert Innes pointed a camera at a grouping of stars near the Southern Cross, the defining feature of the night skies above his adopted Johannesburg. He was looking for a small companion to Alpha Centauri, our closest neighboring star system. Hunched over glass photographic plates, Innes teased out a signal. Across five years of images, a small, faint star moved, wiggling on the sky. It shifted just as much as Alpha Centauri, suggesting its fate was intertwined with that binary system.

UN experts denounce 'myth' pesticides are necessary to feed the world The idea that pesticides are essential to feed a fast-growing global population is a myth, according to UN food and pollution experts. A new report, being presented to the UN human rights council on Wednesday, is severely critical of the global corporations that manufacture pesticides, accusing them of the “systematic denial of harms”, “aggressive, unethical marketing tactics” and heavy lobbying of governments which has “obstructed reforms and paralysed global pesticide restrictions”. The report says pesticides have “catastrophic impacts on the environment, human health and society as a whole”, including an estimated 200,000 deaths a year from acute poisoning.

Seismic Activity and U.S. Nuclear Facilities SOURCE: Science Progress, click here for high res version.The Map above depicts the locations of U.S. nuclear power facilities in gray, and locations of seismic activity in yellow. Data from the USGS and the International Nuclear Safety Center. Following the devastation of last week’s 9.0 scale earthquake and tsunami, Japanese citizens face new realities and threats stemming from damage to nuclear power plant facilities. The quake damaged five nuclear reactors, three of which are facing potential meltdowns due to coolant loss. The human and environmental cost of such an event could be cataclysmic. This catastrophe in Japan should serve as a lesson to the United States as well as Japan, argued Joe Romm, editor of Climate Progress, and CAPAF policy analyst Richard Caperton in this CNN article today.

Your Favorite Housewares Are Spewing Poison Dust Inside Your Home People buy the nicest homes they can afford. They spend years—sometimes decades—pouring money into nest-feathering by stocking up on creature comforts. It’s no wonder we spend 90 percent of our lives indoors. Types of Wind Turbines Used Today Capturing the earth’s natural energy through wind was once an abstract idea. Eventually, however, engineers were able to focus the idea and put it into action through innovative technology. Throughout the development of wind turbines, many prototypes were created, and many of the first ones designed are still used today, just with more modern engineering. Here are a few of the different wind turbines we are used to seeing today, and some we definitely are not.

Inventors' handbook Disclosure and confidentiality Know the important difference between protecting your idea against disclosure and protecting your idea against infringement. Proving the invention Prototypes are necessary. Pacific Islanders appear to be carrying the DNA of an unknown human species Hints of an unidentified, extinct human species have been found in the DNA of modern Melanesians - those living in a region of the South Pacific, northeast of Australia. According to new genetic modelling, the species is unlikely to be Neanderthal or Denisovan - two ancient species that are represented in the fossil record - but could represent a third, unknown human relative that has so far eluded archaeologists. "We’re missing a population, or we’re misunderstanding something about the relationships," Ryan Bohlender, a statistical geneticist from the University of Texas, told Tina Hesman Saey at Science News.

How climate change may drive extreme weather —Whether a specific extreme weather event can be linked to climate change rarely gets a straightforward answer from climate scientists or meteorologists. It's complicated, they'll say, but that doesn't mean there isn't a relationship. "Climate scientists have been willing to link the general increase in certain types of weather extremes (heat waves, droughts, and floods) to climate change in a generic sense," says Michael Mann, an atmospheric scientist at Pennsylvania State University. Rising global temperatures and other climate forces can certainly change the conditions that underlie weather, which climate scientists have said can lead to a change in the frequency of a type of weather event. But Dr. Mann and colleagues report that there is a more direct way that climate change is impacting weather extremes: by altering the movement of the jet stream.

ISDR: Platform for the Promotion of Early Warning Compared to other natural hazards (tropical storms, floods, droughts, etc.) destructive tsunamis occur relatively rare. But the recent tsunami in the Indian Ocean dramatically showed what could happen if a tsunami waves triggered by a major earthquake reaches coastal areas without any early warning. The highly energetic tsunami waves struck the costal areas devastating everything on their path. The costal population lost everything, most of the poorly built houses could not stand the massive flood or they were destroyed by flooding material.