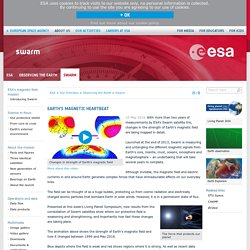 Launched at the end of 2013, Swarm is measuring and untangling the different magnetic signals from Earth’s core, mantle, crust, oceans, ionosphere and magnetosphere – an undertaking that will take several years to complete. Although invisible, the magnetic field and electric currents in and around Earth generate complex forces that have immeasurable effects on our everyday lives. The field can be thought of as a huge bubble, protecting us from cosmic radiation and electrically charged atomic particles that bombard Earth in solar winds.

The force that protects our planet The animation above shows the strength of Earth's magnetic field and how it changed between 1999 and May 2016. Blue depicts where the field is weak and red shows regions where it is strong. NOVA Magnetic Pole Flip 530,000 Years Overdue & Happening Now? 5 Truths About Earth's Magnetic Reversal. Earth's ever-changing magnetic field. Earth's Magnetic Field Is Weakening 10 Times Faster Now. Earth's magnetic field, which protects the planet from huge blasts of deadly solar radiation, has been weakening over the past six months, according to data collected by a European Space Agency (ESA) satellite array called Swarm. 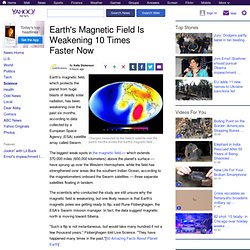 The biggest weak spots in the magnetic field — which extends 370,000 miles (600,000 kilometers) above the planet's surface — have sprung up over the Western Hemisphere, while the field has strengthened over areas like the southern Indian Ocean, according to the magnetometers onboard the Swarm satellites — three separate satellites floating in tandem. Technically, Earth Does Not Orbit Around the Sun.

The discovery that Earth revolves around the Sun was revolutionary. 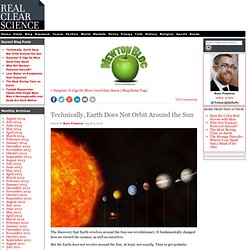 It fundamentally changed how we viewed the cosmos, as well as ourselves. But the Earth does not revolve around the Sun. At least, not exactly. Time to get pedantic. "Technically, what is going on is that the Earth, Sun and all the planets are orbiting around the center of mass of the solar system," writes Cathy Jordan, a Cornell University Ask an Astronomer contributor. "The center of mass of our solar system very close to the Sun itself, but not exactly at the Sun's center. " Every single object in the solar system, from the gargantuan sun to the tiniest speck, exerts a gravitational pull on everything else.

Because the Sun holds 99.87% of all the mass in the solar system, it's always going to win the tug of war. An even better illustration for center of mass is the binary star system. However, rather than play a billion-year game of cosmic tag, more often than not, binary stars will take an elliptical orbit! New historical archeointensity data from Brazil: Evidence for a large regional non-dipole field contribution over the past few centuries. Abstract We report new archeointensity data obtained from the analyses of baked clay elements (architectural and kiln brick fragments) sampled in Southeast Brazil and historically and/or archeologically dated between the end of the XVIth century and the beginning of the XXth century AD. 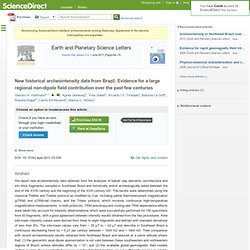 The results were determined using the classical Thellier and Thellier protocol as modified by Coe, including partial thermoremanent magnetization (pTRM) and pTRM-tail checks, and the Triaxe protocol, which involves continuous high-temperature magnetization measurements. In both protocols, TRM anisotropy and cooling rate TRM dependence effects were taken into account for intensity determinations which were successfully performed for 150 specimens from 43 fragments, with a good agreement between intensity results obtained from the two procedures. Nine site-mean intensity values were derived from three to eight fragments and defined with standard deviations of less than 8%. Research highlights Keywords. A Anomalia Eletromagnética sobre o Brasil. 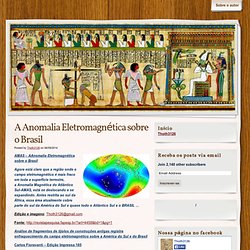