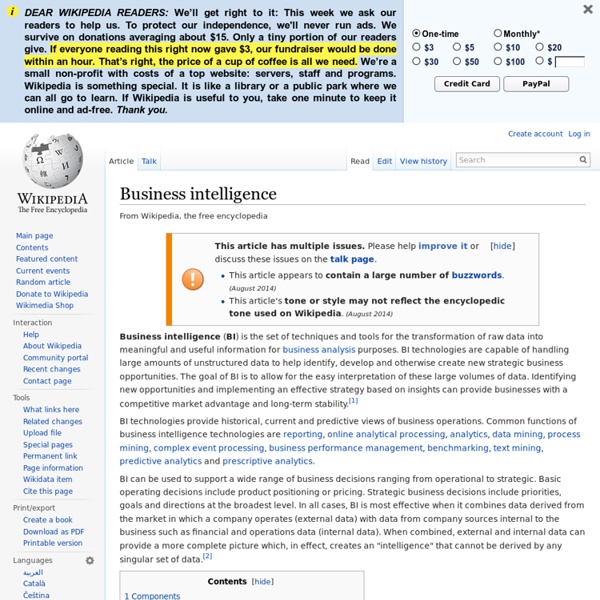 Business intelligence (BI) is the set of techniques and tools for the transformation of raw data into meaningful and useful information for business analysis purposes. BI technologies are capable of handling large amounts of unstructured data to help identify, develop and otherwise create new strategic business opportunities. The goal of BI is to allow for the easy interpretation of these large volumes of data. Identifying new opportunities and implementing an effective strategy based on insights can provide businesses with a competitive market advantage and long-term stability.[1] BI technologies provide historical, current and predictive views of business operations. BI can be used to support a wide range of business decisions ranging from operational to strategic. Components[edit] Business intelligence is made up of an increasing number of components including: History[edit] In a 1958 article, IBM researcher Hans Peter Luhn used the term business intelligence. Data warehousing[edit]

Data integration Data integration involves combining data residing in different sources and providing users with a unified view of them.[1] This process becomes significant in a variety of situations[2], which include both commercial (such as when two similar companies need to merge their databases) and scientific (combining research results from different bioinformatics repositories, for example) domains. Data integration appears with increasing frequency as the volume (that is, big data[3]) and the need to share existing data explodes.[4] It has become the focus of extensive theoretical work, and numerous open problems remain unsolved. History[edit] Figure 1: Simple schematic for a data warehouse. The Extract, transform, load (ETL) process extracts information from the source databases, transforms it and then loads it into the data warehouse. Figure 2: Simple schematic for a data-integration solution. Example[edit] Theory[edit] Definitions[edit] where is the global (or mediated) schema, and and queries over .

Bioinformatics Bioinformatics /ˌbaɪ.oʊˌɪnfərˈmætɪks/ ( listen) is an interdisciplinary field that develops methods and software tools for understanding biological data. As an interdisciplinary field of science, bioinformatics combines Computer Science, Biology, Mathematics, and Engineering to analyze and interpret biological data. Bioinformatics has been used for in silico analyses of biological queries using mathematical and statistical techniques. Bioinformatics is both an umbrella term for the body of biological studies that use computer programming as part of their methodology, as well as a reference to specific analysis "pipelines" that are repeatedly used, particularly in the field of genomics. Introduction[edit] History[edit] Historically, the term bioinformatics did not mean what it means today. Sequences[edit] Sequences of genetic material are frequently used in bioinformatics and are easier to manage using computers than manually. Goals[edit] Relation to other fields[edit] Sequence analysis[edit]

Chief data officer A chief data officer (CDO) is a corporate officer responsible for enterprise wide governance and utilization of information as an asset, via data processing, analysis, data mining, information trading and other means. CDOs report mainly to the chief executive officer (CEO). Depending on the area of expertise this can vary. Role definition[edit] The Chief Data Officer title shares its abbreviation with the Chief Digital Officer but the two are not the same job. History and evolution[edit] The role of manager for data processing was not elevated to that of senior management prior to the 1980s. With the rise in service-oriented architectures (SOA), large-scale system integration, and heterogeneous data storage/exchange mechanisms (databases, XML, EDI, etc.), it is necessary to have a high-level individual, who possesses a combination of business knowledge, technical skills, and people skills, guide data strategy. Early CDO appointments[edit] Notable example CDOs[edit] References[edit]

Burgh's Eye View Places Ok, so how do I use it? Burgh’s Eye View uses maps to visualize data generated by the City of Pittsburgh and its residents. As you play with it—changing the date range, for example—what you see on the map will change. You can scroll to zoom or use the +/- buttons at the top left, click on pins to see details, and move the map around using a mouse or touch. Currently, three general map types are available: maps of points, places and parcels. Points The points map shows data located at specific points in the city, such as public safety incidents, 311 requests, code violations, capital projects, and city assets. Search You can search for a specific address or block, as well as other keywords in some of the data. Dates Most information on the Points map has a date attached to it. Data Using these checkboxes, you can turn off datasets to get a clearer view of what you're interested in. 311 Requests Public Safety Information Building Information "Filter by Area" Places Traffic Signals Parcels

Master data management In business, master data management (MDM) is the comprehensive method used to consistently define and manage the critical data of an organization to provide a single point of reference.[1] The data that is mastered may include reference data- the set of permissible values, and the analytical data that supports decision making.[2] In computing, a master data management tool can be used to support master data management by removing duplicates, standardizing data (mass maintaining),[3] and incorporating rules to eliminate incorrect data from entering the system in order to create an authoritative source of master data. Master data are the products, accounts and parties for which the business transactions are completed. The term recalls the concept of a master file from an earlier computing era. Goal[edit] MDM is a comprehensive method of enabling an enterprise to link all of its critical data to one file, called a master file, that provides a common point of reference. Issues[edit]

Service-oriented architecture See also the client-server model, a progenitor concept A Service-Oriented Architecture (SOA) is a design pattern in which software/application components provide services to other software/application components via a protocol, typically over a network and in a loosely-coupled way. The principles of service-orientation are independent of any vendor, product or technology.[1] A service is a self-contained unit of functionality, such as retrieving an online bank statement.[2] By that definition, a service is a discretely invokable operation. However, in the Web Services Definition Language (WSDL), a service is an interface definition that may list several discrete services/operations. And elsewhere, the term service is used for a component that is encapsulated behind an interface. Services can be combined to provide the complete functionality of a large software application.[3] A SOA makes it easier for software components on computers connected over a network to cooperate. Overview[edit]

Data science Data science is a multi-disciplinary field that uses scientific methods, processes, algorithms and systems to extract knowledge and insights from structured and unstructured data.[1][2] Data science is the same concept as data mining and big data: "use the most powerful hardware, the most powerful programming systems, and the most efficient algorithms to solve problems".[3] In 2012, when Harvard Business Review called it "The Sexiest Job of the 21st Century",[7] the term "data science" became a buzzword. It is now often used interchangeably with earlier concepts like business analytics,[8] business intelligence, predictive modeling, and statistics. History[edit] The term "data science" has appeared in various contexts over the past thirty years but did not become an established term until recently. In 1996, members of the International Federation of Classification Societies (IFCS) met in Kobe for their biennial conference. In November 1997, C.F. In 2001, William S. References[edit]

Chief strategy officer Today, many CEOs have less time to devote to executing strategy, while at the same time uncertain environments increase the need for professional strategy development.[1][2] As a result, Chairmen, Presidents, and CEOs in academic, nonprofit and corporate organizations are appointing CSOs.[3][4] In recent years, the CSO position increased in popularity, which is reflected by the high number of US companies (nearly 50% of S&P 500 firms) who created CSO positions in their top management teams.[5] The CSO is a consultative role; part leader and part doer, with the responsibility of ensuring that execution of the strategy supports the strategy elements. This unique background takes a multitude of different operating experiences, and must include being both a creative thinker and influential collaborator.[6] CSOs are often executives who have worn many hats at a variety of companies or agencies before taking on the responsibilities and tasks that come with the job title.[7][8] References[edit]

CDOs Prove Their Worth in an Analytics-Driven Business World Research shows that chief data officers are helping their organizations turn data into dollars. Chief data officers (CDOs), originally hired to oversee data governance, data quality, and regulatory matters, are now finding themselves on the frontlines of the analytics revolution, showing their organizations how data gathered from a rapidly multiplying number of endpoints can boost both growth and revenue. Valerie Logan, a Gartner research director, recently observed that by 2021 the office of the CDO will be seen as a mission-critical function, comparable to IT, business operations, HR, and finance, in 75 percent of large enterprises. Image: Pixabay “Most organizations are realizing that data — the data they have and how they use it — will be a key competitive advantage for them," said Shervin Khodabandeh, a partner and managing director with global management consulting firm Boston Consulting Group. Shervin Khodabandeh Fighting for survival Mark Bregman Doug Bordonaro An evolving role

The changing role of the CDO: 3 keys for success The following is a guest article from Jack Norris, Senior Vice President, Data & Applications, MapR. Whether you are a chief data officer (CDO) today or simply tasked with impacting your organization through a better understanding of data, you do not face a simple task, a fact indicated by the short tenure of the average CDO. The inability of most CDOs to understand and command the value of their data is due to the wrong focus. Many organizations accept the adage that data is their greatest asset and go to great lengths to accumulate data in vast warehouses or lakes. These data stores typically support a series of queries and analytics to understand and report on what happened. The intent being that various corporate acolytes gain insight and walk down the hall to make some change that will deliver business impact. At the end of the day, data has very little impact, and what impact that is made, does not easily move and adjust with changing business events. 1. 2. 3.