How to Avoid Being Fooled by Bad Maps. Maps are big these days. 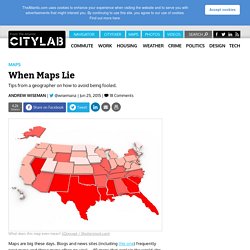 Blogs and news sites (including this one) frequently post maps and those maps often go viral—40 maps that explain the world, the favorite TV shows of each U.S. state, and so on. They’re all over Facebook, Twitter, and Tumblr, and news organizations are understandably capitalizing on the power that maps clearly have in digital space: they can visualize a lot of data quickly and effectively. Meteorkrater forteller om jordens utvikling - tu.no/bygg. These Before-And-After Shots Show How Quickly The Planet Is Changing. A little over a century after early explorers took the first photographs of Muir Glacier in Alaska, the same location is unrecognizable today. 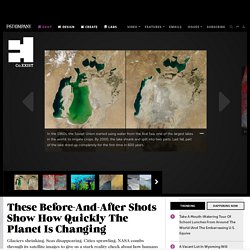 By 2005, the glacier had shrunk back completely out of view, and mountains were covered with trees instead of snow and ice. Side-by-side photos of the glacier are part of a collection called Images of Change that NASA has curated since 2009. Each week, the team searches through images from NASA's collection of satellites (and occasional photographs taken from land), looking for ones that draw into focus how our cities have sprawled and our landscapes have changed. One focus of the site is climate change. "Climate change is kind of an abstract concept for most people, or it feels like it's something that happens invisibly or it's going to happen in the future," says Randal Jackson, Internet manager for NASA's Jet Propulsion Laboratory.

The view from space makes large-scale changes more obvious. Ancient Asteroid Boiled Oceans, Burned the Sky, and Shook Earth for a Half-Hour. These days we freak out whenever some dinky bollide explodes in the sky over Russia. 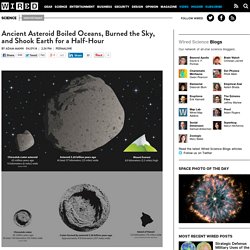 But scientists have now reconstructed the effects of an enormous 3.26-billion-year-old asteroid impact on Earth that boiled the oceans, turned the sky red hot, and generated a half-hour-long earthquake that shook the planet. Though we have heard about ancient impacts such as the dinosaur-killing asteroid that hit our planet 65 million years ago, the image above really gives a sense of perspective for these events. To have looked up in the sky and seen a space rock that dwarfed any mountain on Earth would have been chilling. The gigantic object was about 30 miles wide, roughly the width of Rhode Island. It struck an area of what is now South Africa, generating a crater that would have stretched halfway across that country.

Researchers know all this from studying fractures in a rock layer in South Africa known as the Barberton greenstone belt, one of the oldest rock formations on Earth. Earth's oldest impact crater found in Greenland. You'd have to go to the moon or Mars to find a bigger impact crater than the one discovered in Greenland. 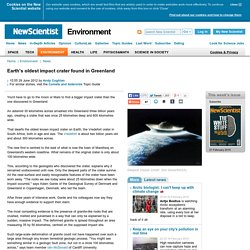 An asteroid 30 kilometres across smashed into Greenland three billion years ago, creating a crater that was once 25 kilometres deep and 600 kilometres wide. That dwarfs the oldest known impact crater on Earth, the Vredefort crater in South Africa, both in age and size. 2012: The end of the world or just another year of living in harm’s way? Skatten på bunnen av Sandsfjorden. What if the Earth were Hollow? Making: The Pinnacle of Cake Evolution. Stunning feathered dinosaur fossil. Corn Engineered To Survive Drought. It has been a summer of withered crops and wildfires, the U.S.’s driest in the last fifty years, during which 55 percent of the U.S. has experienced a drought. 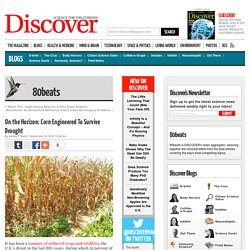 And of the land dedicated to corn production, 87 percent has been dry. Over at Technology Review, Jessica Leber wrote about an engineering solution to the problem of parched corn: seeds bred or genetically enhanced to resist drought, some of which have been tested this summer and will be sold by three big seed companies next year. Leber’s story features Syngenta’s Agrisure Artesian, a type of corn that was bred, rather than genetically modified, to resist drought. It was sold in limited quantities this year. But Syngenta, along with DuPont and Monsanto, is also trying to figure out what kinds of genetic enhancements might help corn hold onto water better. Though farmers and researchers have long worked to create drought-resistant crops, it has not been easy to do, even with the help of genetic engineering. Biblical-Type Floods Are Real, and They're Absolutely Enormous.

After teaching geology at the University of Washington for a decade, I had become embarrassed that I hadn’t yet seen the deep canyons where tremendous Ice Age floods scoured down into solid rock to sculpt the scablands. 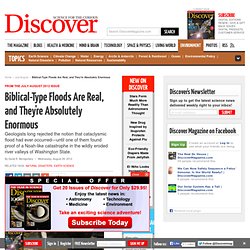 So I decided to help lead a field trip for students to see the giant erosion scars on the local landforms. We drove across the Columbia River and continued eastward, dropping into Moses Coulee, a canyon with vertical walls of layered basalt. Cretaceous Footprints Found at Goddard. Cretaceous Footprints Found at Goddard NASA's Nodosaur Footprint Verified – Perhaps with Baby Nodosaur in Tow Not one, but two nodosaurs passed through the campus of NASA's Goddard Space Flight Center in Greenbelt, Md., between 110 and 112 million years ago, a U.S. 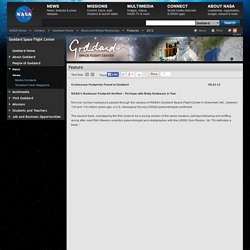