Earth Science Picture of the Day 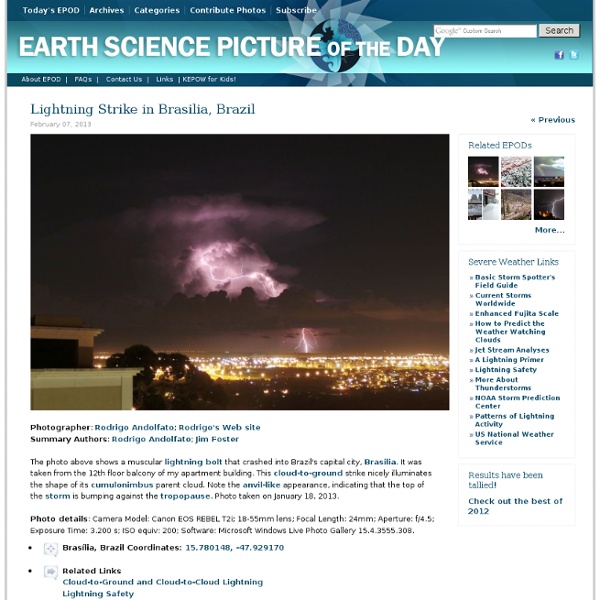 Ocean Color Image Archive Page NOTE: All SeaWiFS images presented here are for research and educational use only. All commercial use of SeaWiFS data must be coordinated with GeoEye Category: All Gallery Images This SeaWiFs image provides a view of a Dust storm over the Red Sea. Northwest African Dust Storm A massive dust storm erupted off the northwestern coast of Africa over this past weekend and seemd to be at its maximum intensity on Sunday, 2 March 2003 as seen in this SeaWiFS true color image. Phytoplankton Bloom in the Barents Sea A break in the clouds over the Barents Sea on August 1, 2007 revealed a large, dense phytoplankton bloom to the orbiting MODIS aboard the Terra satellite. Click on the above image for a larger view of the region. Dust from northern Africa often blows across the Mediterranean Sea as was hapenning again on August 19th, 2004 when the above image was collected. Probably the most dominant oceanographic feature of the western North Atlantic Ocean is the Gulf Stream. Prince Edward Islands Plume

Earth GLOBAL CLIMATE CHANGE from JPL Your planet is changing. We're on it. Our planet is changing. Through the gradual build-up of more greenhouse gases in the atmosphere, Earth is warming. As Earth warms, ocean waters expand and ice melts to make sea levels rise. Click here to see how your planet is changing. EARTH IMAGES from the JPL Photojournal NASA Spacecraft Sees Stark Effects of California Drought on Agriculture Stark effects of a California drought on agriculture can be seen clearly in these two February images acquired by NASA's Landsat 8 in 2014 (left) and NASA's Terra spacecraft in 2003 (right). Read more | | More Earth images Explore Earth satellites in 3D "Eyes on the Earth" is a 3-D visualization experience that lets users "fly along" with NASA's fleet of Earth science missions and observe climate data from a global perspective in an immersive, real-time environment. View interactive Earth Observing Missions CloudSat Revealing the inner secrets of clouds. › Mission home page

Climate Change, Deforestation, Biomes and Ocean Currents, Plankton, Endangered Species - Earth Web Site Click for more detail Thermohaline Change Evidence is growing that the thermohaline current may be slowed or stopped by cold fresh water inputs to the Arctic and North Atlantic oceans. This could occur if global warming is sufficient to cause large scale melting of arctic sea ice and the Greenland ice sheet. Such a change in the current may be gradual (over centuries) or very rapid (over a few years). Either would cause planet wide changes in climate. This effect may be part of what starts and stops the ice ages. "Diatoms (a kind of phytoplankton) are estimated to "scrub" roughly as much CO2 from the atmosphere each year as all the world's rainforests. "Net primary productivity is the mass of plant material produced each year on land and in the oceans by photosynthesis using energy from sunlight. Biodiversity is the variety of life found at all levels of biological organization, ranging from individuals and populations to species, communities and ecosystems. Click for more detail

Extreme Weather Photo Contest Winners | Precipitation Measurement Missions Thank you to everyone who submitted photos to the first installment of our GPM Extreme Weather Photo Competition. We loved all of your entries and thoroughly appreciate your participation! The GPM Photo Competition Committee is happy to announce our top 5 picks. We’ll be sending the submitters NASA bags and GPM stickers. Ormond Shelf, by Jason Weingart Date and Location: May 15, 2012 Ormond Beach, Florida How this Photo Was Taken: “I'm a photography student at the University of Central Florida. I have shot many storms from the same spot this photo was taken, and I almost drove by to get a different vantage point, but something told me to just stop at my spot. The storm actually pushed back on shore as it moved south, and then became strong enough for tornado warnings on three separate occasions. Fun Fact: A shelf cloud is a type of arcus cloud with a wedge shape. About Photographer Jason Weingart: Thunderstorm, by Grant Petty Date and Location: May 22, 2011 Dane County, Wisconsin

Botany Photo of the Day Taisha wrote today's entry. We were both challenged to find the bona fide botanical name for this taxon, and had to give up (no results in the USPTO database, for one), so we left it as a black-fruited selection (read more below). Taisha writes: The past two days in Vancouver have been quite warm and enjoyably sunny--prompting many to get out into the garden. Some have begun planting seeds indoors or in greenhouses, and it won't be long until we can directly seed outdoors. Today, we have a photo of some caryopses of Zea mays. For those in the temperate northern hemisphere who are anticipating growing plants from seeds soon, I thought I would help explain some oft-used seed terminology. Certified organic (with an emphasis on Canada, as definitions and regulations are different depending on country): Organic seeds are seeds that are harvested from a plant grown in a way that meets organic regulations.

Mineralogy Database Total Lunar Eclipse This Weekend—Last One Until 2014 This weekend sky-watchers across most of the globe will have the chance to watch at least some of the last total lunar eclipse until 2014. The entire lunar eclipse will be visible in East Asia, Australia, and the far western portion of North America that includes Alaska and Canada's Yukon and Northwest Territories. The spectacle will last nearly three and a half hours, starting on Saturday at 4:45 a.m. Totality—when the full moon will be completely blocked from direct sunlight—will start at 6:05 a.m. Part of the eclipse will be visible in Europe and Africa at moonrise, in the evening, said Raminder Singh Samra, an astronomer at the H.R. "Meanwhile, observers across the Pacific region of North America will get to see the sky show low in the western horizon at moonset, in the early morning," he said.

Here’s why the Mars Curiosity camera is so outdated When we first saw pictures from NASA’s Curosity mission to Mars, many of us asked, “That’s it?” Yes, the images weren’t as detailed as we wanted, but they were from another planet, so we happily gobbled them up. But why does the Mars rover feature paltry 2-megapixel sensors on its main imaging cameras? The decision stems from planning of the rover’s systems back in 2004, Malin Space Science Systems project manager Mike Ravine told Digital Photography Review. The planning team selected the 2-megapixel sensor on Curiosity for several reasons. First, it had to produce a reasonable amount of data for transmission back to Earth via a UHF transmitter. “We developed all four cameras around a common architecture, so the choice of sensor was hedged across all of them,” Ravine said. In light of advanced camera technology featured on today’s smartphones, Ravine seems slightly disappointed the images on Mars aren’t more breathtaking. You can view more photos from Curosity at NASA.gov.

Mineralogy Database - Mineral Collecting, Localities, Mineral Photos and Data How Far Away is the Horizon? | Life's Little Mysteries On a clear day, you can see for miles and miles and miles. The old saying turns out to be just about true. For a six-foot tall person, the horizon is a little more than 3 miles (5 km) away. Geometry tells us that the distance of the horizon – i.e. the farthest point the eye can see before Earth curves out beneath our view – depends simply on the height of the observer. For example, if you stood atop Mount Everest (which is 29,029 feet, or 8,848 meters tall), the horizon would be about 230 miles (370 km) away. Add the effect of refraction, which bends rays of light as they pass through the atmosphere, and the horizon is even farther. Plus, since clouds hover above ground level, they can be seen to farther distances than features on Earth's surface. But just as weather sometimes aids our view, it can also hinder it.