Home. Produce - Local Organics - Seasonal Local Produce. Building-Successful-Food-Hubs_Illinois. Casey Food Friends on Vimeo. These Floating Vertical Farms Are Designed To Bring Local Food To The Densest Urban Areas. As one of the densest countries in the world, with nearly 20,000 people per square mile, Singapore doesn't really have room for farms. 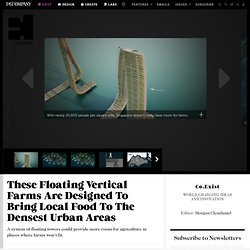 Almost all of the food there is imported from elsewhere--sometimes as far away as Brazil or Argentina. But could floating vertical farms make local food a reality? Architects from Barcelona-based design firm JAPA have proposed a new system of looping towers that could float in local harbors, providing new space for year-round crops. Called F.R.A., short for "floating responsive architecture," the design is inspired in part by floating fish farms that have been in use locally since the 1930s. The unusual shape is intended to save space and maximize the light that reaches plants. Throughout the towers, a network of sensors would monitor crops and communicate in real time with networks in the city.

Nano Water Chip Could Make Desalination Affordable for Everyone. With freshwater declining throughout the globe, desalination looks increasingly attractive, but current technologies are expensive, demand far too much energy and are prone to contamination. 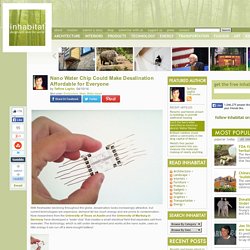 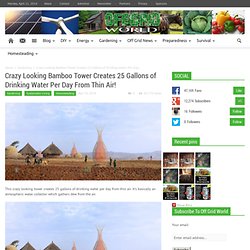 It’s basically an atmospheric water collector which gathers dew from the air. “…The 9 m tall bamboo framework has a special fabric hanging inside capable to collect potable water from the air by condensation…” It’s called the WarkaWater: “…The name ‘WarkaWater’ comes from the Warka Tree, a giant wild fig tree native to Ethiopia, traditionally used for public gatherings and school education. The Warka Tree is an archetype of the Biennale theme ‘Common Ground’…” The simple and practical, yet elegant design powers out ahead of any of the commercial atmospheric water generators on the market which cost thousands more to build than this. This is a wonderful water generation idea, that’s inexpensive, and actually beautiful to look at. Australia's Industrial Fluoridation Disgrace. This smart sprinkler controller optimizes watering schedules based on soil mo... Designed specifically for SmartThings, this connected device replaces standard "dumb" irrigation controllers and brings smart home functionality to your yard. 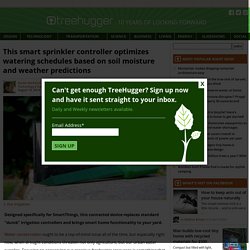 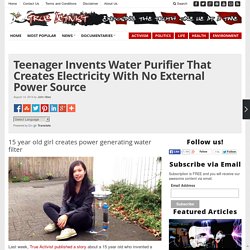 His device was a submission for this year’s “Google Science Fair” which features a number of brilliant inventions, many of which were created by teenagers and young children. Another finalist in this year’s contest is 17-year-old Cynthia Sin Nga Lam from Australia, who also has an invention that creates electricity. Her invention is a water purification system that does not require an external power source, but actually creates electricity of its own. Her device, which she calls a Portable Photocatalytic Electricity Generation and Water Purification Unit, or H2Pro for short, produces both clean energy and fresh water at the same time. Scientists Discover the True Age of Water Actually Predates the Sun!

How old is water? 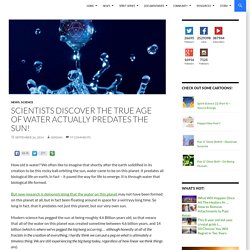 We often like to imagine that shortly after the earth solidified in its creation to be this rocky ball orbiting the sun, water came to be on this planet. It predates all biological life on earth, in fact – it paved the way for life to emerge. How to Make Liposomal Vitamin C At Home. The Bridge to Better Brands. Generate Endless Hot Water Without Electricity Or Solar Power. Food Sovereignty: 5 Steps to Cool the Planet and Feed Its People. How the industrial food system contributes to the climate crisis Between 44% and 57% of all GHG emissions come from the global food system Deforestation: 15-18% Before the planting starts, the bulldozers do their job. 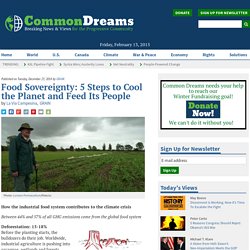 Worldwide, industrial agriculture is pushing into savannas, wetlands and forests, ploughing under huge amounts of land. The FAO says the expansion of the agricultural frontier accounts for 70-90% of global deforestation, at least half of that for the production of a few agricultural commodities for export. Farming: 11-15% It is generally acknowledged that farming itself contributes 11-15% of all greenhouse gasses produced globally. DIY $2 Self-Watering Garden Bed - Grow Produce Easily, Even in the Toughest D... By Carolanne Wright Contributing Writer for Wake Up World “When life gives you lemons, share them with neighbors!” 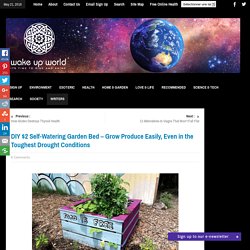 A Real Threat to Our Water Supplies. Of all resources, water is the most critical to our daily lives. 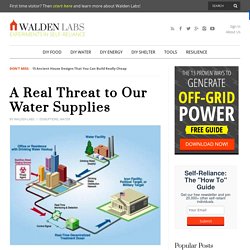 Our bodies depend on it and our gardens simply cannot thrive without it. In many areas of the country, we depend on public utilities to provide safe drinking water to our homes. Even in more rural areas where wells are commonly used, there are risks to the groundwater supply from industrial and agricultural processes. Brilliant floating greenhouse sustains itself with sun & harvested rainwater ... In a time when traditional agriculture is giving way to hybridized methods of production, urban rooftop farms and other forms of unconventional cultivation, many are looking for ways to maximize production that is not land-based. 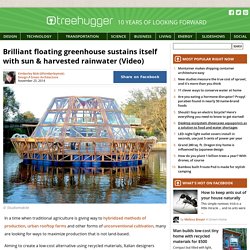 Aiming to create a low-cost alternative using recycled materials, Italian designers Antonio Girardi and Cristiana Favretto of Studiomobile created this floating modular greenhouse that sits upon 96 repurposed plastic drums. Dubbed "Jellyfish Barge," the idea behind this curious octagonal structure is to empower families and communities that live in coastal areas or near a body of water to grow their own food, without the need for land. © Studiomobile Jellyfish Barge from studiomobile on Vimeo. Crops are grown hydroponically in this 750-square-foot space, and are nourished with rainwater that is harvested through seven solar stills in a self-sustaining, solar-powered system.

This Impressive Tower Creates Water from the Air! There are a flurry of amazing inventions coming into the fold lately, hoverbikes being among one of them.. but today I want to tell you about this really cool device that is making an impact in Ethiopia, and hopefully will soon make its way overseas to North America and the rest of the world. The device is called Warka Water – and it has the capacity to generate up to 25 Gallons of water PER DAY simply by sitting in the hot heat of the desert. Now THAT is impressive, especially considering the whole scare of an impending drought that is currently upon us.

Sunflower solar harvester provides power and water - tech - 30 September 2014. Send for the Sunflower. A solar energy harvester could soon become the first "drop-in" machine to provide renewable energy, water and heat to off-grid communities in remote regions. The 10-metre-high, sun-tracking dish has been designed to be transported in a single shipping container, so it can be delivered to any location. It is being developed by Airlight Energy of Biasca, Switzerland. As well as clean water and electricity, it can generate heat or, with the addition of a heat pump, provide refrigeration. Globaltap - Clean free and accessible water. Scientists Just Created Crystals That Make Breathing Underwater A Possibility. By: Collective Evolution.

Danish scientists are a step closer to helping those suffering from respiratory ailments thanks to a revolutionary new absorption crystal. Working out of the University of Southern Denmark the group has uncovered crystalline materials that are capable of pulling oxygen out of both air and water -which could eventually mark the end of the need to carry around large oxygen tanks. The revolutionary crystalline material can bind and store oxygen in high concentrations, then control its release time depending on what the user needs.

This new discovery could even benefit deep sea divers, giving them superhero-like abilities to stay submerged for extended periods of time without an oxygen tank. The standard human body can function with only 12% oxygen in the air around us, but what if we needed it in higher concentrations? This was the main subject of the study conducted at the University of Southern Denmark, with help from the University of Sydney, Australia. Sources: Portland's New Pipes Harvest Power From Drinking Water. Fact Coexist If you live in Portland, your lights may now be partly powered by your drinking water. An ingenious new system captures energy as water flows through the city’s pipes, creating hydropower without the negative environmental effects of something like a dam.

Small turbines in the pipes spin in the flowing water, and send that energy into a generator. “It’s pretty rare to find a new source of energy where there’s no environmental impact,” says Gregg Semler, CEO of Lucid Energy, the Portland-based startup that designed the new system. “But this is inside a pipe, so no fish or endangered species are impacted. Iusewaterasfuel. Water Fueled Engine Introduction This product(s) will be presented in 100 percent open source and there is no room for negotiations on how the inventor wishes to release this information to the public. The reasoning for the lack of control of the inventor’s intellectual property is due to the great impact and change his inventions will cause on the planet.

There are seven billion people on our planet and much profit can be made by all. Run Car on Water - stanley meyer resonant electrolysis cell system collection. Artificial Leaf Can Make Oxygen in Space with Water and Light. Greywater Irrigation. 14 Off-Grid Projects to Cut Your Energy and Water Usage. The Healing Properties of Water Stored in Copper. Solar Seawater Distiller Turns Salt Water into Drinking Water Using Only Sunl... Nick Bernabe (AntiMedia) A genius yet very simple way to produce healthy, bacteria-free water. Sustainable ways to feed the world are subverted by corporations. Humans’ relationship to food is one of the most fundamentally shaping aspects of our societies. The sole fact that the majority of the world’s population now lives in urban centers is the direct result of a process that began approximately 10,000 years ago. This process was the switch from nomadic hunting-gathering societies to urban sedentary ones.

In fact, formal agriculture is the only means whereby an urban society can sustain itself, its population can increase size and density, and complex societal interactions can develop from an urban context. Wake Up to What's in Our Food! The Open Food Network — Sustainable Chippendale. The Open Food Network creates an online marketplace that makes it easy to find, buy and sell sustainable local food (a bit like Etsy or E-Bay, but for food producers and hubs). They support independence, diversity, transparency and local networks to create thriving food economies.

How Can Could Help: From $20 you can get computer stickers, shopping bags, posters and food hub friends calendar.A $75 or $100 donation provides a pass to a local farm open day, visiting food producers in NSW. New Indoor Farming Method Produces 100x More Food Per Square Foot! The Future of Food. Floating Vertical Farms Could Provide Densely Populated Countries With Local ... These folks feed their family with a garden in their swimming pool — and you ...

When Dennis and Danielle McClung bought a foreclosed home in Mesa, Ariz., in 2009, their new yard featured a broken, empty swimming pool. Instead of spending a small fortune to repair and fill it, Dennis had a far more prescient idea: He built a plastic cap over it and started growing things inside. Thus, with help from family and friends and a ton of internet research, Garden Pool was born. Food is Free Project:The Open Source Teaching Farm. FOODLOGICA - DUURZAME LOGISTIEK VOOR LOKALE MERKEN EN HORECA. SMART FOOD GRID. How does THE SMART FOOD GRID work exactly? Well, imagine yourself having the possibility to order local products while waiting for the bus, for the train, for the metro, to pick up your kids from school or queuing outside the cinema, Using your mobile phone, you can scan a QR code on a banner, order local products and get them delivered by 100 % sustainable transport means to your house, office or wherever you want.

The Secret to Food Independence. Turn your city into a swarm of robot farms. The Coming Food Printer Revolution. How to Start a Food is Free Project Guide. Check Out The World’s Largest Indoor Vertical Farm Capable Of Producing 2 Mil... Learn How This Family Grows 6,000 Lbs Of Food on Just 1/10th Acre. Highest Good Food: Large-scale Gardening.