Oklahomans Feel Way More Earthquakes Than Californians; Now They Know Why. Austin Holland, research seismologist at the Oklahoma Geological Survey, gestures to a chart of Oklahoma earthquakes in June 2014 as he talks about recent earthquake activity at his offices at the University of Oklahoma in Norman, Okla. 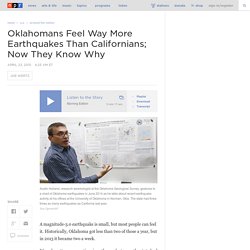 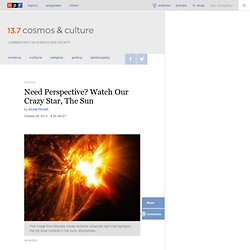 NASA/SDO hide caption itoggle caption NASA/SDO This image from Monday shows extreme ultraviolet light that highlights the hot solar material in the sun's atmosphere. I often tell my students that one reason to study science is that it puts our lives into perspective. A Coastal Paradise Confronts Its Watery Future. Some neighborhoods in this "Mayberry by the Sea" could be underwater within a few decades, according to some projections. 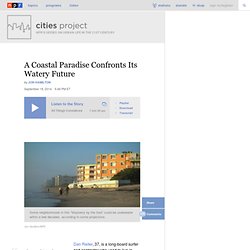 Jon Hamilton/NPR hide caption itoggle caption Jon Hamilton/NPR. Mapping What You Cannot See, Cannot Know, Cannot Visit : Krulwich Wonders... When I was a boy I had a globe. 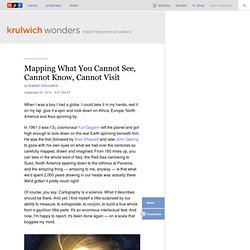 I could take it in my hands, rest it on my lap, give it a spin and look down on Africa, Europe, North America and Asia spinning by. In 1961 (I was 13), cosmonaut Yuri Gagarin left the planet and got high enough to look down on the real Earth spinning beneath him. He was the first (followed by Alan Shepard and later John Glenn), to gaze with his own eyes on what we had over the centuries so carefully mapped, drawn and imagined.

What Would Happen If I Ate A Teaspoonful Of White Dwarf Star? "Everything about it would be bad," says Mark Hammergren, an astronomer at Adler Planetarium in Chicago, beginning with your attempt to scoop it up. 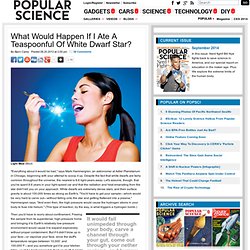 Despite the fact that white dwarfs are fairly common throughout the universe, the nearest is 8.6 light-years away. Let's assume, though, that you've spent 8.6 years in your light-speed car and that the radiation and heat emanating from the star didn't kill you on your approach. White dwarfs are extremely dense stars, and their surface gravity is about 100,000 times as strong as Earth's. Lake Erie's Toxic Bloom Has Ohio Farmers On The Defensive. A New Window On The Big Bang Has Been Opened : 13.7: Cosmos And Culture. The BICEP2 telescope at twilight, which occurs only twice a year at the South Pole. 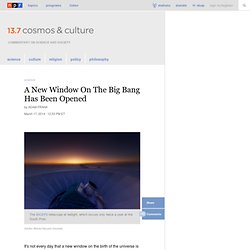 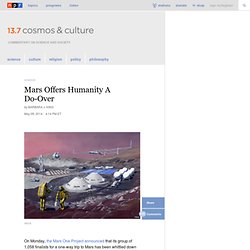 Last month when I wrote about Mars One's aim to establish a human colony on the red planet by around 2025, I learned a lot — through comments left here at 13.7 and through emails and Twitter updates sent to me directly — about two divergent channels of thought regarding this goal. Crisis Or Challenge? The Physics Of Today : 13.7: Cosmos And Culture.

Physics is full of big, interesting questions about phenomenon such as black holes. 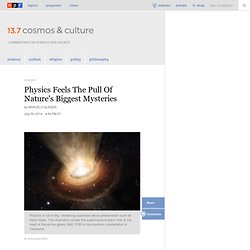 The Algae Problem in Lake Erie Isn’t Going Away Anytime Soon. With the water ban lifted, more than 400,000 people in the Toledo, Ohio, area are once again able to turn on their taps. 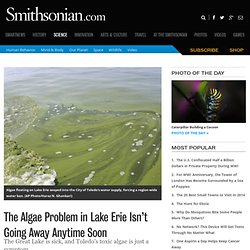 But the bloom of toxic algae in Lake Erie isn’t going away anytime soon, and the troublesome scum serves as a warning that one of the largest supplies of fresh water in the United States is in trouble. Boil, Burn Or Explode? How You Die In Space : 13.7: Cosmos And Culture. Eddie Toro/iStockphoto C'mon, admit it. 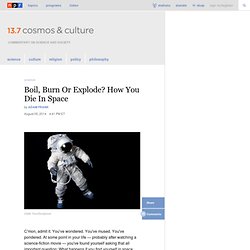 You've wondered. You've mused. You've pondered. At some point in your life — probably after watching a science-fiction movie — you've found yourself asking that all important question: What happens if you find yourself in space without a spacesuit? I found myself asking the same question the other night after watching Marvel Studio's, Guardians of the Galaxy (best movie ever). Astronaut Who Walked On The Moon: 'It Was Science Fiction To Us' Hide captionDuring the Apollo 12 mission, astronaut Alan Bean holds a container of lunar soil. The astronaut Charles "Pete" Conrad, who took the photograph, is reflected in Bean's faceshield.

Bean says he used to think that in his lifetime, we'd build a base on the moon and start preparing to travel to Mars. Hulton Archive/Getty Images During the Apollo 12 mission, astronaut Alan Bean holds a container of lunar soil. Research shows it’s ‘blind luck’ that asteroids haven’t destroyed a major city yet. Well, here’s something happy to think about as you head into the weekend. Phys.org brings us word that three former NASA astronauts are going to present new research next week showing that there have been 26 asteroid crashes since 2001 that have caused “atomic-bomb-scale explosions” that have fortunately been far away from major population centers.

The research, which was conducted by the B612 Foundation, used data from a nuclear weapons warning network to measure the impact of major asteroid strikes on the Earth’s surface. “This network has detected 26 multi-kiloton explosions since 2001, all of which are due to asteroid impacts,” explained B612 Foundation CEO Ed Lu, a physicist who worked at NASA from 1994 until 2007.