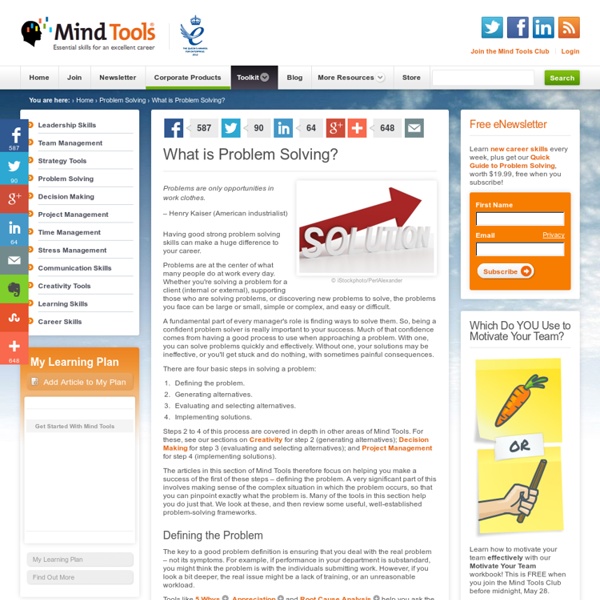 © iStockphoto/PerlAlexander Problems are only opportunities in work clothes. – Henry Kaiser (American industrialist) Having good strong problem solving skills can make a huge difference to your career. Problems are at the center of what many people do at work every day. A fundamental part of every manager's role is finding ways to solve them. There are four basic steps in solving a problem: Defining the problem. Steps 2 to 4 of this process are covered in depth in other areas of Mind Tools. The articles in this section of Mind Tools therefore focus on helping you make a success of the first of these steps – defining the problem. Defining the Problem The key to a good problem definition is ensuring that you deal with the real problem – not its symptoms. Tools like 5 Whys , Appreciation and Root Cause Analysis help you ask the right questions, and work through the layers of a problem to uncover what's really going on. Understanding Complexity Problem-Solving Processes Key Points

Problem Solving Skills How to develop and demonstrate your problem-solving skills We all solve problems on a daily basis, in academic situations, at work and in our day-to-day lives. Some of the problems that are typically faced by students include: Putting together an argument for an essay Debugging a computer program Dealing with an awkward customer when working part-time in a shop or restaurant Thinking about how you are going to manage your budget to keep you going until the end of term Working out why your printer won’t respond Developing a strategy to reach the next level of a computer game. Any job will also bring problems to be faced. You need to be able to: Evaluate information or situations Break them down into their key components Consider various ways of approaching and resolving them Decide on the most appropriate of these ways Solving these problems involves both analytical and creative skills. Analytical and critical thinking skills help you to evaluate the problem and to make decisions.

School secretary Job Information Page Content School secretary Hours37 per weekStarting salary£15,000 + per year As a school secretary or administrator, it would be your job to provide administrative support in a school. If you are organised and have good office skills, and would like to work in an educational environment, this job could be perfect for you. In this job you would need good spoken and written communication skills. To get into this job you would usually need previous experience of office work, especially the main computer software packages. WorkDesc The work Your typical duties would include: You would come into contact with a wide range of people including teachers, pupils, parents and carers, education welfare officers, social workers and school governors. In some smaller schools, you may take on extra management duties, such as responsibility for finance. HoursDesc Hours In many jobs you would work during term-time only (usually 40 weeks a year), or you could work all year round. IncomeDesc Income More information

Phoenix capital researche With the European End Game now in sight, the primary question that needs to be addressed is whether Europe will opt for a period of massive deflation, massive inflation, or deflation followed by inflation. Indeed, with Europe’s entire banking system insolvent (even German banks need to be recapitalized to the tune of over $171 billion) the outcome for Europe is only one of two options: 1) Massive debt restructuring 2) Monetization of everything/ hyperinflation These are the realities facing Europe today (and eventually Japan and the US). Personally, I believe we are going to see a combination of the two with deflation hitting all EU countries first and then serious inflation or hyperinflation hitting peripheral players and the PIIGS. In terms of how we get there, I believe that in the next 14 months, the following will occur. 1) Germany and possibly France exit the Euro 2) ALL PIIGS defaulting on their debt 3) Potential hyperinflation in the PIIGS and peripheral EU countries 1) Leave the EU

Psychology: Adult temper tantrums - by Elizabeth M Young Elizabeth M Young's image for: "Psychology Adult Temper Tantrums" Caption: Location: Image by: Sometimes it just feels good to have an adult temper tantrum, stomping the feet and kvetching about the unfairness of it all. But healthy adults will resolve to collect evidence, then walk away and then sue, file complaints, call security or the police, or handle the matter using legal and socially acceptable measures. When considering the odd, normal adult temper tantrum, it helps to understand that there are individuals who repeatedly and consistently get gratification from triggering upset and anger in others. There is a social adjustment disorder called "explosive disorder", which calls for certain conditions to be met before it is diagnosed.The problem is when the temper is repetitive and involves behavior that is abusive, disturbs the peace, is physically violent or is illegal.

School Secretary Career Guide - Education & Childcare Jobs School secretaries perform important administrative tasks which help in the day-to-day running of a school, enabling teachers and teaching assistants to perform their jobs efficiently. School secretaries perform administrative tasks in schools. They ensure that the school environment runs as smoothly as possible and allow teachers to focus their energies purely on providing children with an education, rather than worrying about keeping records and other vital yet time-consuming tasks. A school secretary provides a warm and welcoming face to members of the general public as well as providing comfort and reassurance to pupils throughout the school day. School secretaries work in all kinds of schools, including small, rural primary schools and large comprehensive schools located in city centres. The majority of school secretaries are women and the job appeals in particular to women with school-age children, since they are not required to work during the school holidays. Salary Qualifications

Psychology: Adult temper tantrums - by Robert Grice Robert Grice's image for: "Adult Temper Tantrums" Caption: Location: Image by: Psychology: Adult Temper Tantrums We have all lost our “cool” at times. The first step in exploring any topic is to define the terms. What are some possible causes of temper tantrums in adults? 1. 2. 3. 4. 5. 6. How do I prioritise my workload? How do you eat an elephant? One bite at a time... People who over-eat are often described as having ‘eyes bigger than their stomachs’. The time management equivalent is the person who takes on more and more projects that look inviting and exciting, with a total disregard for existing work commitments. To regain control over your workload, a reality check is essential. And finally, apply a little discipline. The scenario of being allocated too much work by a superior and feeling that you cannot refuse is addressed in another page of this topic – The art of saying ‘no’. Prioritisation Things which matter most must never be at the mercy of things which matter least. Prioritisation is the cornerstone of good time management. These tasks directly contribute to the achievement of your job objectives and the functioning of your organisation, in other words, the work that you are paid to do. These, if not completed very soon, will have a negative impact. Quadrant 1 – important and urgent

Le Monde Action for Happiness First things first: prioritising tasks for better time management Want to improve your on task prioritisation and time management skills? Terence Mauri, a leading business speaker in leadership and management issues, offers some tips. ‘I am definitely going to take a course on time management … just as soon as I can work it into my schedule’ (anonymous). An eight hour day is only 480 minutes. Speed is now king. It’s no surprise that according to a recent global survey by Accenture on management productivity, over 80% of respondents agreed that ‘they often felt there weren’t enough minutes in the day to achieve everything’. Stay in controlThe good news is there are some proven ways of managing your time and staying in control. At the heart of time management is an important shift in focus around the following areas: Concentrate on results, not on being busy. Use your time wisely‘The key is in not spending time, but in investing it’ (Stephen R Covey). Quite so. Good luck! LinksCIMA professional developmentCIMA on demand