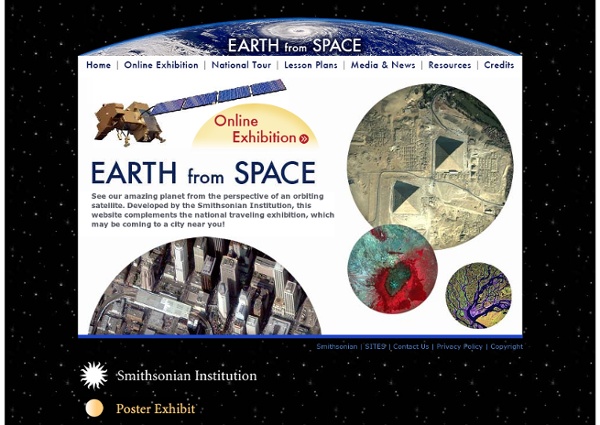 Earth GLOBAL CLIMATE CHANGE from JPL Your planet is changing. We're on it. Our planet is changing. Through the gradual build-up of more greenhouse gases in the atmosphere, Earth is warming. Click here to see how your planet is changing. EARTH IMAGES from the JPL Photojournal NASA Spacecraft Sees Stark Effects of California Drought on Agriculture Stark effects of a California drought on agriculture can be seen clearly in these two February images acquired by NASA's Landsat 8 in 2014 (left) and NASA's Terra spacecraft in 2003 (right). Read more | | More Earth images Explore Earth satellites in 3D "Eyes on the Earth" is a 3-D visualization experience that lets users "fly along" with NASA's fleet of Earth science missions and observe climate data from a global perspective in an immersive, real-time environment. View interactive Earth Observing Missions Active Cavity Irradiance Monitor Satellite Monitors total sun energy that reaches Earth. › Instrument home page

Geographic.org home page - Geography, climate, countries, Maps, Flags, Population Extreme Weather Photo Contest Winners | Precipitation Measurement Missions Thank you to everyone who submitted photos to the first installment of our GPM Extreme Weather Photo Competition. We loved all of your entries and thoroughly appreciate your participation! The GPM Photo Competition Committee is happy to announce our top 5 picks. Ormond Shelf, by Jason Weingart Date and Location: May 15, 2012 Ormond Beach, Florida How this Photo Was Taken: “I'm a photography student at the University of Central Florida. I have shot many storms from the same spot this photo was taken, and I almost drove by to get a different vantage point, but something told me to just stop at my spot. The storm actually pushed back on shore as it moved south, and then became strong enough for tornado warnings on three separate occasions. Fun Fact: A shelf cloud is a type of arcus cloud with a wedge shape. About Photographer Jason Weingart: Thunderstorm, by Grant Petty Date and Location: May 22, 2011 Dane County, Wisconsin The storm cell dropped 1-3/4 inch hail near Sun Prairie.

Introduction to Earth Sciences I Introduction to Earth Sciences I Topic 1 The Earth's Macroscopic Properties and What They Can Tell Us To get some very basic descriptions of the Earth we will start by describing some of the simplest of all the Earth's properties - how big, how heavy, how hot, how strong - and how they were deduced. 1.1 The Earth's Size and Shape Centuries ago people had very little idea about the total size of the Earth and hardly any notion of its shape. One of the earliest attempts to estimate the Earth's size was done by Eratosthenes about 200 B.C. If the Earth were flat the "sun angle" would be the same everywhere. If the Earth is round then the "sun angle" would change and he reasoned that the amount of sun angle change had to have something to do with the Earth's total size. Because of this he knew about angles. From there he could get the circumference of the Earth which he estimated at 24,500 miles, only about 50 miles off current best estimate. Mini-Quiz: Forward and Inverse Thinking . 1.3.1.

Total Lunar Eclipse This Weekend—Last One Until 2014 This weekend sky-watchers across most of the globe will have the chance to watch at least some of the last total lunar eclipse until 2014. The entire lunar eclipse will be visible in East Asia, Australia, and the far western portion of North America that includes Alaska and Canada's Yukon and Northwest Territories. The spectacle will last nearly three and a half hours, starting on Saturday at 4:45 a.m. Pacific Time. Totality—when the full moon will be completely blocked from direct sunlight—will start at 6:05 a.m. PT and last until 6:57 a.m. Part of the eclipse will be visible in Europe and Africa at moonrise, in the evening, said Raminder Singh Samra, an astronomer at the H.R. "Meanwhile, observers across the Pacific region of North America will get to see the sky show low in the western horizon at moonset, in the early morning," he said.

Moving slabs [This Dynamic Earth, USGS] The layer of the Earth we live on is broken into a dozen or so rigid slabs (called tectonic plates by geologists) that are moving relative to one another. "Historical perspective" How Far Away is the Horizon? | Life's Little Mysteries On a clear day, you can see for miles and miles and miles. The old saying turns out to be just about true. For a six-foot tall person, the horizon is a little more than 3 miles (5 km) away. Geometry tells us that the distance of the horizon – i.e. the farthest point the eye can see before Earth curves out beneath our view – depends simply on the height of the observer. For example, if you stood atop Mount Everest (which is 29,029 feet, or 8,848 meters tall), the horizon would be about 230 miles (370 km) away. Add the effect of refraction, which bends rays of light as they pass through the atmosphere, and the horizon is even farther. Plus, since clouds hover above ground level, they can be seen to farther distances than features on Earth's surface. But just as weather sometimes aids our view, it can also hinder it.

Time Zones Drill to Earth's Mantle (PhysOrg.com) -- In what can only be described as a mammoth undertaking, scientists, led by British co-chiefs, Dr Damon Teagle of the National Oceanography Centre in Southampton, England and Dr Benoit Ildefonse from Montpellier University in France, have announced jointly in an article in Nature that they intend to drill a hole through the Earth’s crust and into the mantle; a feat never before accomplished, much less seriously attempted. The Earth’s mantle is the part of the planet that lies between the crust and the iron ball at its center, and to reach it, would require drilling down from a position in the ocean, because the crust is much thinner there. Even still, it would mean drilling through five miles of solid rock. And if that doesn’t sound hard enough, temperatures increase the farther down you go, and could reach as high as 1,050 degrees Fahrenheit; high enough to render useless most modern drill bits.

What Is Globalization? Finally, a definition of globalization that one can understand and to which we now can relate: Question: What is the truest definition of Globalization? Answer: Tragically, Princess Diana’s death. Question: Why? An English princess with an Egyptian boyfriend crashes in a French tunnel, driving a German car with a Dutch engine, driven by a Belgian who was drunk on Scottish whiskey, followed closely by Italian paparazzi on Japanese motorcycles; treated by an American doctor, using Brazilian medicines. This is sent to you by an American, using Bill Gate’s technology and you are probably reading this on your computer, that uses Taiwanese chips and a Korean monitor, assembled by Bangladeshi workers in a Singapore plant; transported by Indian lorry-drivers, hijacked by Indonesians, unloaded by Sicilian longshoremen and trucked to you by illegal Mexican workers… And that is what Globalization is. ~ source unknown ~

How Humans Helped the Earth in 2010: Slide Show Ridding the Earth of Plastic From boom to bust, the reputation of plastics since World War II has gone from revolutionary dream invention to environmental nightmare. Degradable plastics break down into smaller pieces, leaching chemicals such as bisphenol A (BPA) into the water. Pieces of plastic are often mistaken for food among marine and desert animals alike -- with lethal consequences. Cutting back on the pervasive use of plastics in society is practically impossible, but helping to improve biodegradability, identifying new alternative materials, researching the ocean’s plastic-laden gyres, recycling plastic in new ways, and banning the use of plastic bags shows that in 2010 humans took the problem of plastic to the bank. In Agra, India, home of the Taj Mahal, plastic bags and bottles blocked drains during the monsoon season.

Hydrologic Cycle and Interactions Ground Water and Surface Water A Single Resource--USGS Circular 1139 The Hydrologic Cycle and Interactions of Ground Water and Surface Water The hydrologic cycle describes the continuous movement of water above, on, and below the surface of the Earth. The hydrologic cycle commonly is portrayed by a very simplified diagram that shows only major transfers of water between continents and oceans, as in Figure 1. Figure 1. To present the concepts and many facets of the interaction of ground water and surface water in a unified way, a conceptual landscape is used (Figure 2). Figure 2. Haze over Appalachian Mountains in North Carolina. Movement of water in the atmosphere and on the land surface is relatively easy to visualize, but the movement of ground water is not. (Box A) Ground water moves along flow paths of varying lengths in transmitting water from areas of recharge to areas of discharge" Subaqueous spring in Nebraska. Figure 3. Figure 4. Figure 5. Figure 6. Figure 7. (Box B) Figure 8.