Image of the Day 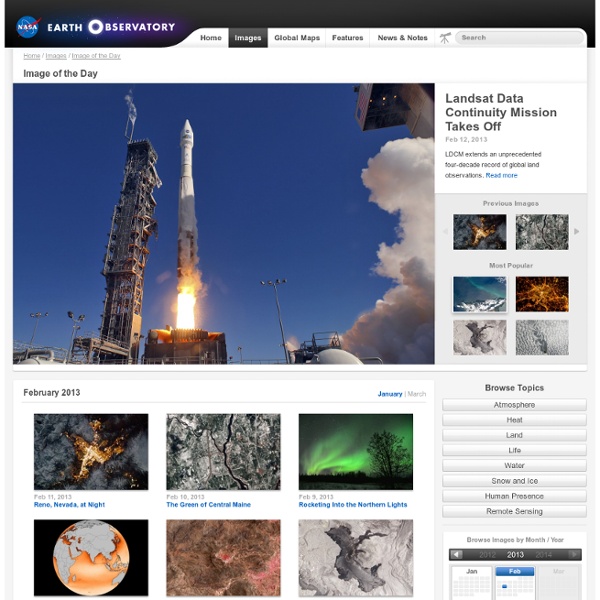 Greatest Hits from Landsat : Feature Articles Deforestation in the Amazon Rainforest takes on many different patterns. In Rondônia, a state in Western Brazil, deforestation took on the fishbone pattern revealed in these Landsat images from 1975 and 2012. Access to this remote region began with the building of a major road stretching from north to south. Secondary roads were then slowly cut through the dense forest at right angles to the initial road. “Because these roads cut deep into the rainforest and then spread outwards, there’s a much greater loss of habitat and species than if there was a single area of deforestation because the amount of edge is critical for biodiversity,” said Compton Tucker, a biologist at NASA’s Goddard Space Flight Center. Tucker says this biodiversity paradox can largely be attributed to the fishbone pattern of deforestation, as it creates many more exposed edges between deforested areas and intact forest.

The Many Hues of London The Enhanced Thematic Mapper Plus (ETM+), the sole instrument on the Landsat 7 satellite, is far more than a camera. While a typical point-and-shoot digital camera takes one picture of a scene based on information from the visible portion of the electromagnetic spectrum, the ETM+ generates eight separate views of everything it images. The ETM+ senses electromagnetic radiation in seven different bands, plus an additional panchromatic band that combines a broad range of wavelengths to create a high-resolution image. Three of them (bands 1, 2, 3) are in the visible portion of the spectrum and correspond to blue, green, and red light. Combining the three visible bands produces a natural-color view, such as the top image of London. In the middle image, data from one of the infrared bands (4) has been combined with the green (3) and blue (2) bands to create a 4-3-2 false-color view of London. Instrument(s): Landsat 7 - ETM+

First of Three Million Forty years ago, after more than a decade working to leave our planet, NASA launched an unprecedented mission to look back at home. Four decades later, the Landsat program is still going strong, with more than three million images of Earth in its archives and a new mission slated for launch in 2013. On July 23, 1972, the Earth Resources Technology Satellite (later renamed Landsat 1) lifted off on a Thor-Delta (Delta 900) rocket from Vandenberg Air Force Base in California. Scientists involved in the mission weren't sure what to expect of the MSS, which used new fiber-optic technology, took pictures in four different bands of the spectrum, and scanned the Earth in strips. As the imagery scrolled into view, there were clouds...and then more clouds...and then land. Any lingering anxiety in the room quickly turned to excitement, and skeptics were promptly converted into supporters. Read more about the history of the Landsat program in our new feature story: Landsat Looks and Sees.

Sea Ice Retreats in the Northwest Passage Ice retreated rapidly in the Parry Channel—part of the famous and elusive Northwest Passage—between mid-July and early August 2012. These images, acquired by the Moderate Resolution Imaging Spectroradiometer (MODIS) on NASA’s Terra satellite, show significant changes over two weeks. The top image shows Parry Channel on July 17, 2012, when ice filled the channel. The Canadian Ice Service reported that ice cover in Parry Channel began to fall below the 1981–2010 median after July 16, 2012, and the loss accelerated over the following two weeks. These photo-like images show widespread open water in early August, though patches of ice linger south of Melville Island. Whether or not ships can easily pass, recent studies have suggested that certain organisms have begun to take advantage of the open water. Attempts to identify a shortcut between Europe and Asia across the Arctic date back to the late fifteenth century, just several years after Columbus journeyed to the Americas. Instrument(s):

Water: A Precious Resource in the Yanqi Basin Editor’s Note: Today’s caption is the answer to Earth Observatory’s August satellite puzzler. The Yanqi Basin, in China’s Xinjian Province, lies in the Taklamakan Desert. The basin receives an average of just 80 mm (3 inches) of precipitation per year, making it one of the driest places in the world. An indication of this are the dunes visible in the top image, which was acquired on September 17, 2000, by the Enhanced Thematic Mapper Plus (ETM+) on Landsat 7. Snow and glacial melt from the Tian Shan and Borohoro Mountains, which lie to the west, provide enough water to feed the Kaidu River (lower image). West of the dam, there is a marshy area dense with reeds. North of the marsh, the patchwork of light green is evidence of farming by people of the town of Yanqi (population 29,000), where growers have drawn water from the Kaidu in significant quantities since the 1960s. The agricultural activity has not come without consequences. Instrument(s): Landsat 7 - ETM+

Tiny Shrimp, Big Changes Along the Pacific coast of Honduras and Nicaragua, in the Gulf of Fonseca, the landscape has changed over the past forty years. An aquaculture industry has developed, producing a bountiful harvest of shrimp within sight of coastal mangroves and wetlands. The shrimp farms also produce a rich harvest of arguments, with some people seeing an economic success story and a reasonable use of coastal land, while others decry unnecessary and destructive changes to wetlands. All three images above show the eastern end of the Gulf of Fonseca as viewed by the Thematic Mapper (TM) instrument on Landsat 5. In these natural-color images, tidal (salt) flats are shades of beige and gray, mangroves are dark green and edged in brown, and inland agricultural lands are shades of brown and light green. From the 1980s until the late 1990s, shrimp farming in this area was mostly conducted in three harvests each year. In the images, more ponds are dry in January 2011 than in January 1999. Instrument(s):

Tahiti, French Polynesia In August 1768, Captain James Cook, naturalist Joseph Banks, and a shipload of sailors set sail from England to Tahiti to observe the Transit of Venus. Camped out on Point Venus, they witnessed the event on June 3, 1769. Cook sketched the transit, but Banks had surprisingly little to say about it. Perhaps he was distracted by the wonders of the island itself. The Enhanced Thematic Mapper Plus on the Landsat 7 satellite captured this natural-color image of Tahiti on July 11, 2001. Although Tahiti-Nui now has a fairly symmetrical contour, it has an asymmetrical three-dimensional shape. Yet something else besides volcanic activity has shaped Tahiti: rain. Though the Transit of Venus was the stated objective of the British expedition, Banks was likely more interested in Tahiti’s plants. Complementing the rich life on land is marine life around Tahiti’s perimeter. NASA Earth Observatory image by Jesse Allen and Robert Simmon, using Landsat data from the U.S. Instrument(s): Landsat 7 - ETM+

World of Change: Columbia Glacier, Alaska : Feature Articles The Columbia Glacier descends from an ice field 3,050 meters (10,000 feet) above sea level, down the flanks of the Chugach Mountains, and into a narrow inlet that leads into Prince William Sound in southeastern Alaska. It is one of the most rapidly changing glaciers in the world. The Columbia is a large tidewater glacier, flowing directly into the sea. When British explorers first surveyed it in 1794, its nose—or terminus—extended south to the northern edge of Heather Island, a small island near the mouth of Columbia Bay. The glacier held that position until 1980, when it began a rapid retreat that continues today. These false-color images, captured by Landsat satellites, show how the glacier and the surrounding landscape has changed since 1986. The Landsat sensors detect light reflecting off the Earth in the short wave-infrared, near-infrared, and green portions of the electromagnetic spectrum. The retreat has also changed the way the glacier flows.